Share All sharing options for: Five bellwether players of the AL West

This is part of a series on bellwether players -- the players whose successes and failures might give you a pretty good idea of how the entire team is doing. You can find the NL East here the NL Central here, and the NL West here.

But only because I couldn't use "every starting pitcher." Really, that's the story of the A's. Brett Anderson qualifies as the veteran on the staff. He turned 25 in February.

The superlative pitching was only one part of Oakland's run last year, though. The other big contributor was their power. So much power. Remember the 1987 season, with the rabbit ball? The A's had McGwire and Canseco, both of them young and healthy, in a season where balls were flying out of the park. That team had exactly two more home runs than the A's did in the pitcher-friendly 2012 season.

Brandon Moss was third on the team with 21 homers, and he hit .291/.358/.596. If you're looking for a list of A's players with a slugging percentage like that in 100 at-bats or more, here you go: Nap Lajoie, Al Simmons, Jimmie Foxx, Reggie Jackson, Mark McGwire, and Jason Giambi. Four Hall of Famers, and two with a decent-to-good case for the Hall. And Brandon Moss.

You might think Moss was a prospect last year, but he was 28, and he spent the last two seasons in Triple-A, where he did … okay. He's a career .276/.354/.497 hitter in Triple-A, which isn't that special for a guy in his late 20s, especially in the Pacific Coast League. Take a look at the PCL leaders for home runs. Brad Snyder, Luis Jimenez, Andrew Brown … all non-prospects who hit a little better than Moss did last year.

Maybe something clicked. Maybe the strikeout rate (he's in Carlos Pena/Pedro Alvarez territory) portends doom. But the A's are penciling him in at cleanup to start the season. As Brandon Moss goes …

The 3.90 ERA isn't all that impressive, but I guess that's why we don't use ERA so much these days. His FIP was 3.29, and regardless of which permutation of wins above replacement you use, he was one of the more valuable pitchers in the AL last year.

I wouldn't know where the heck that was going, either. Obviously it's unrealistic for the Rangers to expect those spooky-low Pacific League rates. For one, he wasn't pitching to major leaguers, and for another, the entire league is walk-averse. The average pitcher in the Pacific League in 2011 walked 2.3 batters for every nine innings he pitched; the average was 3.1 for Major League Baseball the same year. What you see might be what you get when it comes to Darvish's command.

But if he could improve it just a tick, he would go from one of the more valuable pitchers in the AL to that inner circle where pitchers like Kershaw and Verlander reside. And that would make up for the relatively quiet offseason for the Rangers.

You can't talk about right-handed hitters in Seattle this year without the accompanying image: 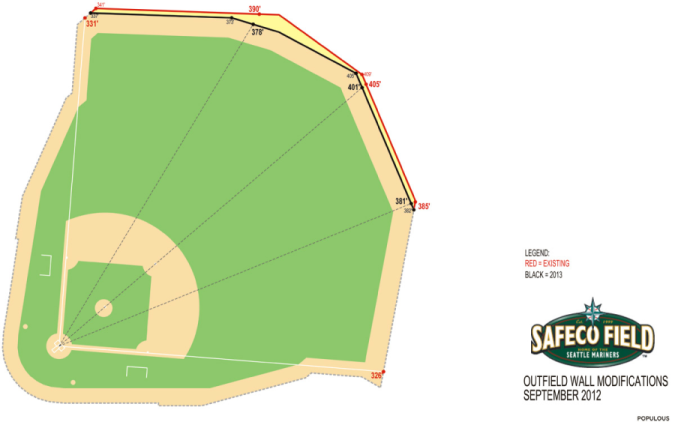 Montero is still just 23, even though it seems like he was a top prospect back in the days of rap-metal, so there's still room for growth. We're getting to the point, though, where we'll have to stop adjusting his stats for age. Because these minor-league numbers …

… are super-impressive only when you account for him being so much younger than the rest of the league. And that's something you should do, of course. But at a certain age, the actual production starts to be more important than the projections. Montero isn't at that age yet; he still gets a lot of leeway. It might be two or three years before we can toss Montero into the Justin Smoak bin of dang-its, so it's not like this is a make-or-break year. But Montero going off would make the Mariners feel a whole lot better about their future.

I thought it was weird when the Rangers paid an unknown quantity like Darvish significantly more to replace a pitcher who had proven he could pitch in Arlington. As if you needed proof, know that Jon Daniels is smarter than I am. Wilson actually had a lower ERA than Darvish, but Angel Stadium is an extreme pitcher's park -- it has the same three-year park factors as Petco Park, for example. Add that in, and Wilson had his worst season as a starter.

But the normal bugaboos aren't there. He didn't allow an inordinate number of hits on balls put in play. His velocity is increasing, not getting worse. His ground-ball rate is still solid, and when it comes to high-leverage situations and pitching with runners on, he was even better than expected.

So what gives? It might help to break it down by month:

His ERA in August was 7.99. It was 3.66 in September, even though he allowed almost as many homers (six in August, five in September) and more walks. Either something was off with his mechanics in August, or something was off with his luck. Whatever it was, it seems to have been fixed somewhat in September. The Angels are counting on generic innings-eaters at the bottom of their rotation, so they'll need Wilson to pitch like the rotation topper he has been.

What would a successful season be for the Astros? Continued progression from Jose Altuve, for one. Integrating some of the farm into the lineup and rotation, for another. Avoiding serious injuries. Not getting stuck in the mesh netting behind home plate. Things like that.

But the Astros are different from your typical rebuilding team in that they're filled with players who probably aren't going to be around for the next good team. Using the 2003 Tigers theory of anyone-can-do-it-in-three-years, pretend the 2015 Astros are outstanding. Who would be on there from the current roster?

Altuve should be. Probably Jason Castro. Probably not Brett Wallace. Certainly not Justin Maxwell. It's a short list*.

And on the pitchers' side, it's even shorter. The only Astros pitcher who could be around for the next good Astros team is Jordan Lyles. He's throwing harder than he did when he first came up, but he's still not missing bats like you would expect from a pitcher with his repertoire.

While a pitcher's age is less important than a hitter's age when it comes to evaluating a young player, the age still matters somewhat. If Lyles were in Triple-A for the last two years, I'll bet he would have an impressive statistical resume, and the 22-year-old would be a top prospect. He was a first-round pick and the #42 prospect in baseball according to Baseball America in his last eligible season, after all. Don't label him as a Generic Astros Pitcher of Doom just yet. And if a player like Lyles can take a huge step forward, the Astros' season will be a success in its own special way.

• Aroldis Chapman, the Reds and learning from recent history

• Chris Sale and the timing of a pitchers's first big contract

• David Ortiz and his possible replacements