Anyone can predict division winners, but it takes a real fool to get into the minutia of prognostication. So ... here you go.

Share All sharing options for: Five stupidly specific predictions for 2013

Here we go, then, with more predictions. Rob and I have made general predictions in our divisional-preview series, but those are just standings. The goal here is to make stupidly specific predictions and stick by them, even if they'll end up being horribly inaccurate.

1. The Astros finish with 102 losses, but they have just the second-worst record in baseball

The Astros are in first place and on pace for the best season in baseball history, but I'm doubtful they can keep it up. All offseason, people wondered just how bad the Astros could get. Their offseason moves consisted of signing Carlos Peña and trading away one of their best players (who was an oft-injured shortstop, mind you). Pundits noticed that Alex Rodriguez made more than the entire team. There was a wave of Astros mockery washing over the winter months. Check out the Astros.

Yeah, that. Except the Astros aren't the worst team in baseball. Monday afternoon, the Miami Marlins started their season in Washington. Placido Polanco was their cleanup hitter.

Don't mix that with soda water. Take it straight. Appreciate the nuance of it, the strength, the boldness of flavor. It is 2013, and Placido Polanco isn't just starting for a major-league team; he's hitting cleanup. Here's what the Marlins were doing last year at this time. 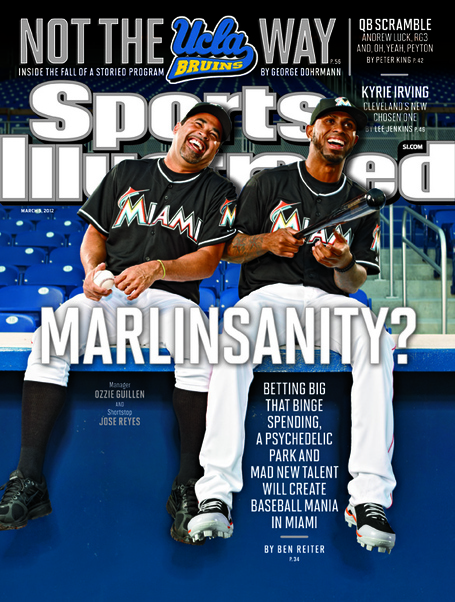 They were getting people fired up for the season.

Darn tootin' they were. And here we are, a year later, and Placido is hitting cleanup. More than that, though, I used to think the Marlins would be a little better than the Astros because of the promising pitchers in the Marlins' rotation. Specifically, Nathan Eovaldi and Jacob Turner. But now Eovaldi is on the shelf with shoulder problems, and Turner is in the minor leagues. Welp.

Jose Fernandez is in the rotation, which is kind of exciting. But he's coming straight up from High-A after starting the year in Low-A last season, so it's probably a bad idea to expect success from him right away. The Marlins should be terrible. Move over Astros.

Because the Cubs will hit so much that he won't be able to avoid 20 wins, you know. But more than that, this is the year that Jackson puts something together, if only because we've all accepted him being merely good. The days of expecting Jackson to turn a corner and morph into an ace are long gone. He still has the fastball, of course. He shows it off like Chevy Chase with the canteen in Three Amigos, splashing it around, wasting it, blissfully unaware that pitchers like Barry Zito and Roy Halladay are staring at him with pure hate and envy in their eyes.

Jackson won't be a Cy Young contender. But he'll pitch well enough to make three voters think, okay, here's a little token of recognition for your good season. Two of them will be Chicago writers, but whatever. It'll still count.

I originally wrote "The Pirates finish one game over .500," and stared at it for a while.

The Pirates will finish exactly one win away from .500. How can they top the disappointment of the last two seasons, in which they looked so good in the first half and so bad in the second half? There's always room for more heartbreak. There's always room for more Pirates. I think this season will be a reversal -- they'll start the season horribly, and then they'll be a juggernaut in August and September, turning what looked to be a 100-loss season into an interesting chase for .500. They'll grind and grind, winning close games, with the goal of .500 slowly coming into view.

And then the baseball gods will push the Pirates button that is forever glowing on their desk. Not trying to be rude, Pirates fans. Just trying to be stupidly specific.

4. Mike Trout has a disappointing season

Willie Mays's first four full seasons: four wins, 11 wins, nine wins, seven wins. Then he started ramping up to the 11-win seasons again. So if you're thinking Mike Trout is Willie Mays -- I mean, that's a ridiculous thing to type to begin with -- you can still expect something less than an 11-win season. And if he's just the best durn Mike Trout he can be instead of a fully formed, inner-circle Hall of Famer, he's probably going to slide down to "merely great" territory this year.

5. These players will win the major awards, and this is not debatable

Was tempted to put Jurickson Profar as the NL Rookie of the Year, but my troll-fu isn't that strong.