How important are assists in the NBA?

Passing is becoming more important than ever in the NBA due to modern defenses. Yet there are plenty of efficient, low-assist offenses and inefficient, high-assist teams. What gives?

Share All sharing options for: How important are assists in the NBA?

Zach Lowe has an unsurprisingly fascinating look at how the Tom Thibodeau-style defenses that have taken over the league have affected offenses. The short version: shooting and smart passing are more important than ever. To counteract the flood-heavy defensive style that is the norm, you have to spread the floor and have players who can hit the open man with quick, decisive strikes.

As long as advanced basketball metrics have been discussed, passing has been a bramble. It's lightly represented in the box score and comes with its own set of preconceived notions. Traditionally, we think of the traditional pass-first, high-assist point guard as very desirable: think Bob Cousy, Steve Nash and John Stockton. Yet many of the great teams of the past three decades -- the '80s Celtics, the '90s Bulls and the '00s Lakers -- had non-traditional point guards (like Dennis Johnson) or lead guards who basically sat in the background. Even in the past decade, you have two NBA champions -- the 2008 Celtics and the 2011 Mavericks -- with traditional, pass-first point guards. And even then, Rajon Rondo averaged just five assists per game. (Tony Parker's assist numbers have gone way up since the Spurs' last title in 2007.)

But judging anything's importance based on its presence on championship teams is oversimplification. The problem with assists is that it's basically impossible to find evidence in any data that they help teams score more efficiently. In other words, the relationship between tallying more assists and shooting better as a team never seems to show up in the data.

To wit, this map shows teams' effective field goal percentage and percentage of field goals assisted this season. If there were a strong positive relationship, the points would group around something like a 1:1 slope. Instead, it's basically a jumble. 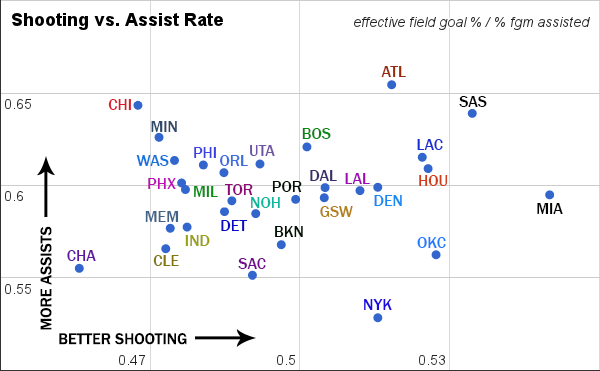 There actually is a small positive relationship between effective field goal and assist percentage. But it's small, and it's been small as long as assists have been recorded. And this is looking at assists and shooting percentage, the piece of offensive performance most closely tied (in theory) to effective passing. When you look for a relationship between assists and overall offensive performance, you have even more trouble. It basically does not show up in the data at all.

This is strange, of course, because on an individual level there is a relationship between assists and conversion. Studies have indicated that players shoot roughly ten percent better on shots that are assisted than ones that are not. (That may be understating it -- the studies on that didn't control for fast-break opportunities or putbacks.) So a player benefits from getting set up for an immediate shot, but a team doesn't necessarily benefit by having a player who sets up players for immediate shots frequently. Strange, huh?

And that's why assists remain a bramble for those interested in advanced metrics. Dean Oliver and John Hollinger had to more or less go with their guts in placing value on assists in devising important individual performance stats (offensive rating and PER, respectively). There's no go-to "point guard stat" that easily describes a passer's impact on teammates. And assertions like those made by coaches and front office folks in Lowe's piece are hard to assess from 10,000 feet.

Look at the map again. The Hawks are the No. 1 team in percentage of made field goals that are assisted. They are No. 6 in shooting percentage. That makes some sense. (The Hawks being the most assist-heavy team doesn't. Jeff Teague is their point guard! But then Al Horford and Josh Smith are excellent passers in the frontcourt.) But the Heat are easily No. 1 in shooting ... and in the bottom half in assist percentage. The Thunder are No. 3 in shooting ... and No. 27 in assist percentage. The Knicks by far get the lowest percentage of field goals via assist, yet land in the top ten in shooting percentage. There are explanations in these cases. Miami, Oklahoma City and New York each have superlative individual scorers, and two of them (the Heat and Knicks) have one of their weaker starters at point guard. But it doesn't change the data: low assist rates simply don't matter for these teams.

On the other side of the map, the Nos. 2 and 4 teams in assist percentage (the Bulls and Timberwolves) are Nos. 29 and 28 in shooting, respectively. Put another way, only one team gets more of its made shots off of assists than Chicago ... but 28 teams shoot more efficiently. That throws our belief that assists, and by extension passing, are vital to offensive performance right back in our faces.

• Ziller: Avoiding the next Kings saga

• The Knicks have rediscovered themselves