The problem with Tim Lincecum (but not the solution)

Say, has anyone noticed Tim Lincecum has been struggling lately? Let's explore why.

Share All sharing options for: The problem with Tim Lincecum (but not the solution)

As someone who writes about the Giants hundreds and hundreds of times every year, I've noticed something peculiar lately. It's a two-parter:

1. Tim Lincecum used to be good

2. Tim Lincecum is no longer good

It's true, it's true. People have e-mailed me with fourth-hand accounts of illicit behavior, claiming that's the problem. People have e-mailed me with detailed mechanical breakdowns, asking if I know how to get in touch with pitching coach Dave Righetti. An incomplete list of suggestions I've seen on comment boards: Arm problems, lack of conditioning, complicated mechanics, poor eyesight, nefarious nighttime activities, concentration, smoking too much pot, not smoking pot anymore, psychological problems, and general apathy. I'm sure I've missed a couple.

If I had the answer, I would be sitting on a pile of money. And I am sitting on my wallet right now, which is stuffed with at least $7, so I guess that's kind of true. But I don't have the answers. Whatever's wrong with Lincecum isn't going to be fixed by a prescription for penicillin and a week off.

So this article isn't about answers. It's just about exploring what's wrong. Last year at this time, there was wishful thinking about LIncecum's batting average on balls in play. It was higher than expected, which led me (and others) to hope he was just unlucky. That almost certainly wasn't the case. He's allowing more runners and getting hit harder than ever. For the most part, he's earned that BABIP, as much as any pitcher can, at least.

Before we can see what's wrong, let's take a quick look at what isn't wrong. Lincecum's velocity is down from its Cy Young peak, and he averages around 90 on his fastball now. Every start he makes, the velocity hounds come sniffing around. Was he touching 93? I saw a 94! Uh-oh, that first pitch was 90, and he usually gives up a couple of feet in the later innings. Everyone stumbles around mumbling "velocity velocity velocity", as if a fastball went through its own Being John Malkovich-style portal.

But the goal isn't necessarily to throw hard. The goal is to miss bats. And Lincecum is missing as many bats as ever: 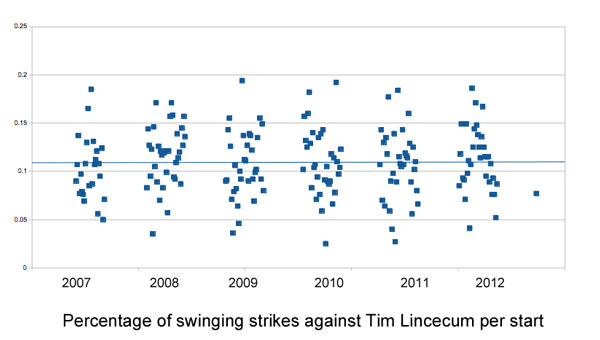 That's kind of stunning to see on a broken pitcher. For all the talk about Lincecum's declining fastball, hitters are still swinging and missing as much at his pitches as they ever have. He's regularly at the top of the league in swinging-strike percentage; he always has been. 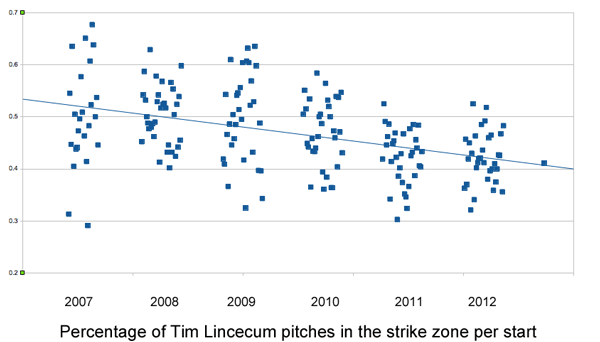 Lincecum has no idea where the ball is going. When he won his last Cy Young in 2009, he regularly had starts with more than 60 percent of his pitches in the strike zone. He hasn't had a single start like that since. And since the start of 2011, he's had just three starts above 50 percent, topping out at 52.5.

Now you can get into the crazy theories for the first time all over again. His arm strength is sapped, which prevents him from being fine with his command. His complicated, trebuchet mechanics are irreparably damaged. His complicated mechanics are damaged, but there's a solution out there. His release point is off. He's hurt. His hair needs to be exactly five inches long -- no more, no less -- for him to maintain proper balance.

The reason is still elusive, but the problem is evident. Pitching isn't just about deception and swing-throughs, it's also about hitting spots -- or at least coming close enough, often enough. Lincecum used to do it. He used to do it well. But he can't anymore. And unless he figures it out before the end of the season, he could go from what was once a possible $200 million deal to a one-year show-me deal.

• The Rays, Marty Foster, and THE HUMAN ELEMENT

Tim Lincecum's 2013 off to rough start