Carl Erskine: "And that is how I met Jackie Robinson"

Share All sharing options for: Carl Erskine: "And that is how I met Jackie Robinson"

Right-handed pitcher Carl Erskine first joined the Brooklyn Dodgers in 1948, Jackie Robinson's second season with the club. Erskine and Robinson were teammates through the 1956 season; during that span the Dodgers won five National League pennants and fell one game short in two other seasons on their way to becoming the legendary "Boys of Summer." Last week, Erskine was gracious enough to answer, via e-mail, a few questions about Jackie Robinson and the new movie starring Chadwick Boseman and Harrison Ford.

Rob Neyer: Mr. Erskine, you debuted with the Dodgers just after the All-Star break in 1948, having been signed a couple of years earlier. Do you remember when you first met Jackie Robinson, and your impressions of him?

Carl Erskine: In the spring of 1948, I was with the Dodgers' farm club in Fort Worth, Texas, and the big club came to play a preseason game with their Double-A affiliate. I started for the Fort Worth Cats. I didn't know anyone on the Dodgers, just the names. I pitched five innings, allowing no runs.

After the game, Jackie came to our dugout and asked for me by name. When I stepped out of the dugout, he shook my hand and said, "I hit against you twice today. You won't be in this league very long." By July 25th, I was called up, joining the Dodgers in Pittsburgh. Jackie was the first player to my locker. He said, "I told you you couldn't miss."

And that is how I met Jackie Robinson.

Neyer: From 1948 through '50, you spent parts of each season with the Dodgers and parts with Fort Worth and then Montreal. But you were called up for good in August of 1950, and Jackie Robinson was your teammate from then until he retired after the 1956 season. What was he like as a teammate, both on and off the field? 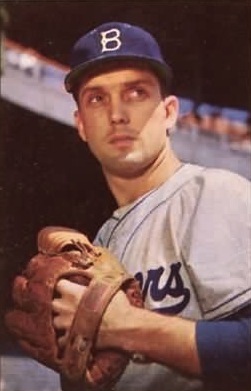 Erskine: Jackie was a serious competitor. As they say, he always had his game-face on. It's well-documented that Jackie felt manager Walt Alston was too passive and didn't fight for his players. However, Jackie was no troublemaker, just a total team player. He was very supportive of me, a real encourager. He was, on the other hand, verbally tough on Don Newcombe, pushed him hard to stay tough, not wilt under pressure.

After the first two years, when Mr. Rickey removed the gag order, Jackie spoke out freely and was abrasive about any small thing he thought smacked of racism. So he was controversial. In fact, according to Buzzie Bavasi, that's why Walter O'Malley wanted to get rid of him in 1956.

Jackie played wherever the manager wanted. So over time he played first base, second base, third base, and left field. Wherever he played, he brought great excitement to the game.

Neyer: As I'm sure you know, for many years Jackie was publicly critical of Major League Baseball's complete lack of black executives or managers. In fact, there wasn't a black manager (Frank Robinson) until after Jackie's premature death. Do you think the players of your era would have played for a black manager? Do you think Jackie would have been a good manager?

Erskine: Jackie had a sense of urgency, as though he felt he didn't have time to wait. He had already had a long wait, so every time he had a chance, he more or less said, "Just because I made it, don't think we're there. Look at what is not happening."

In a way, our team already had a black manager. We, the Dodgers, recognized that Roy Campanella was destined to become a major-league manager. He had the experience and the temperament. So yes, our team would have willingly played for a black manager.

Erskine: I saw the movie last night and was impressed. Especially with the accuracy of the settings. Ebbets Field, the Polo Grounds, etc ... and the Dodgers' clubhouse at Ebbets Field; I could actually see my old locker in the background. Harrison Ford was a very believable Branch Rickey. I actually knew every character portrayed in the movie: Mr. Rickey's staff, all the players, etc. 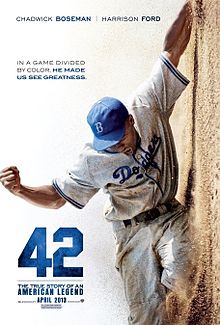 The actor who portrays Jackie was very athletic, and his expressions reminded me of Jackie. Also, I could tell that he had worked at holding the bat and adjusting his top hand while waiting for the pitch very much like Jackie did. He was well-cast, as was Rachel Robinson.

The audience responded a few times with applause when Jackie or Mr. Rickey made a statement putting down bigotry, or when Jackie prevailed over racial slurs made by Phillies manager Ben Chapman. Some exaggerations about racism in baseball were expected. Yes, it was there, especially early on, but the film played up too much some Dodgers passing around a petition, which has actually never been proven to exist, and was denied by team captain Pee Wee Reese.

The scenes with Chapman were extreme, with him baiting Jackie with the N-word maybe 25 times. Chapman was an outspoken bigot, and I suppose in a film it had to be overdone, just to show what it was like in 1947.

I don't know what the critics will say. I say it's a classic film for the ages.