Remixing the Masters: Who should be playing Augusta National this year?

Share All sharing options for: Remixing the Masters: Who should be playing Augusta National this year?

Ahh, the Masters. The azaleas, the pimento cheese sandwiches, the soft sounds of announcers inexplicably affecting a British accent cooing into their microphone to serenade your living room with dignity and distinction ... It's "a tradition like no other." Or "unlike any other." I always forget what the actual phrase is.

But what if we could shake things up? Put a scare into Augusta National by injecting some new blood to the mix. Make it less traditional. That's what we're doing today. In the spirit of rocking the boat and remixing Augusta, we asked SB Nation's staff to come up with their dream Masters foursome. Our choices are below, and I've added some Jim Nantz reactions, as well. 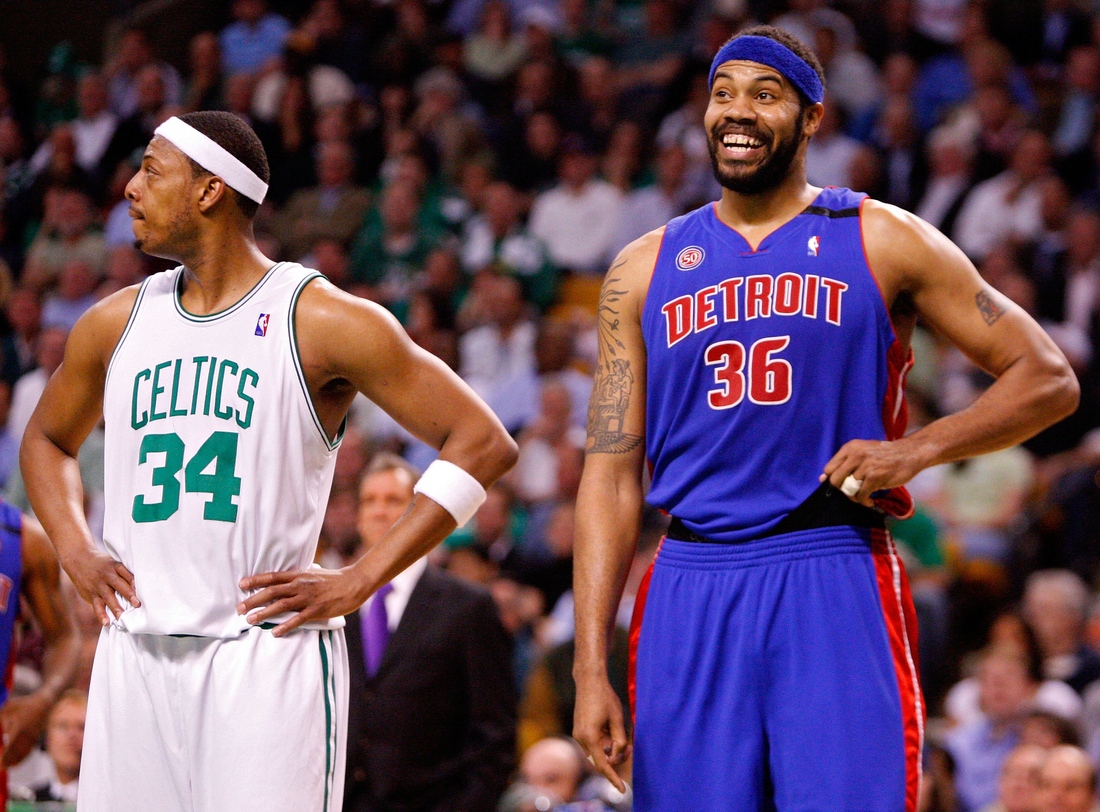 I started all this, so I'll go first. My initial foursome was Michelle Obama (black AND female AND liberal, so triply infuriating to Augusta members), Nicolas Cage, Rob Gronkowski, and Ron Artest (playing 18 holes with a shovel). But after careful consideration, I've decided that the best possible scenario would be Rasheed Wallace, smoking Black & Milds and wearing cutoff sweatpants with patent leather Air Force Ones, walking 18 holes with three random PGA golfers. West Philadelphia meets Augusta and BOOM, the Masters just got 10,000 times better. 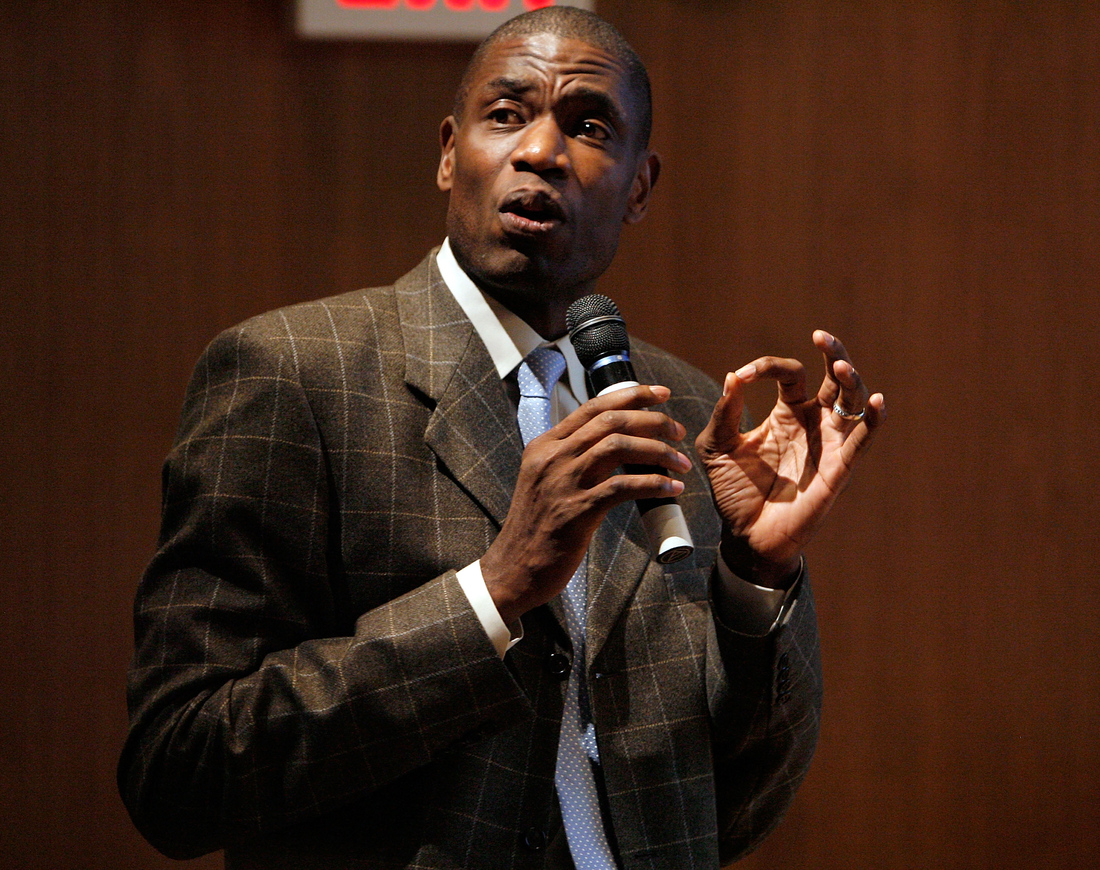 My first pick is Dikembe Mutombo. This requires no explanation for those who have seen footage of him playing golf, or have ever heard him speak, but if you haven't: he is a seven-foot tall and extraordinarily funny and kind man trying to hit a golf ball while speaking his eighth language. The round will take five glorious hours. It will be worth it.

Second: David Feherty, if only so I can talk shit to him about how much fun I am not having playing the stupid game he's devoted his entire life to playing and talking about on television. I love him, and by the end of the round we will be engaged in a fistfight Dikembe will have to break up with his giant arms. (Dikembe is laughing a gigantic laugh while this is happening, and David is trying to use a broken sand wedge as a shiv. I am laughing and bleeding.)

Third: My dad, but only because this foursome needs someone to appreciate the experience while I'm throwing balls by hand into Rae's Creek, and not because this is about emotions. (Also, he'd owe me forever, and I'd consider my birth-debt and that $500 I owe him from a Casino Royale blackjack debacle canceled.) 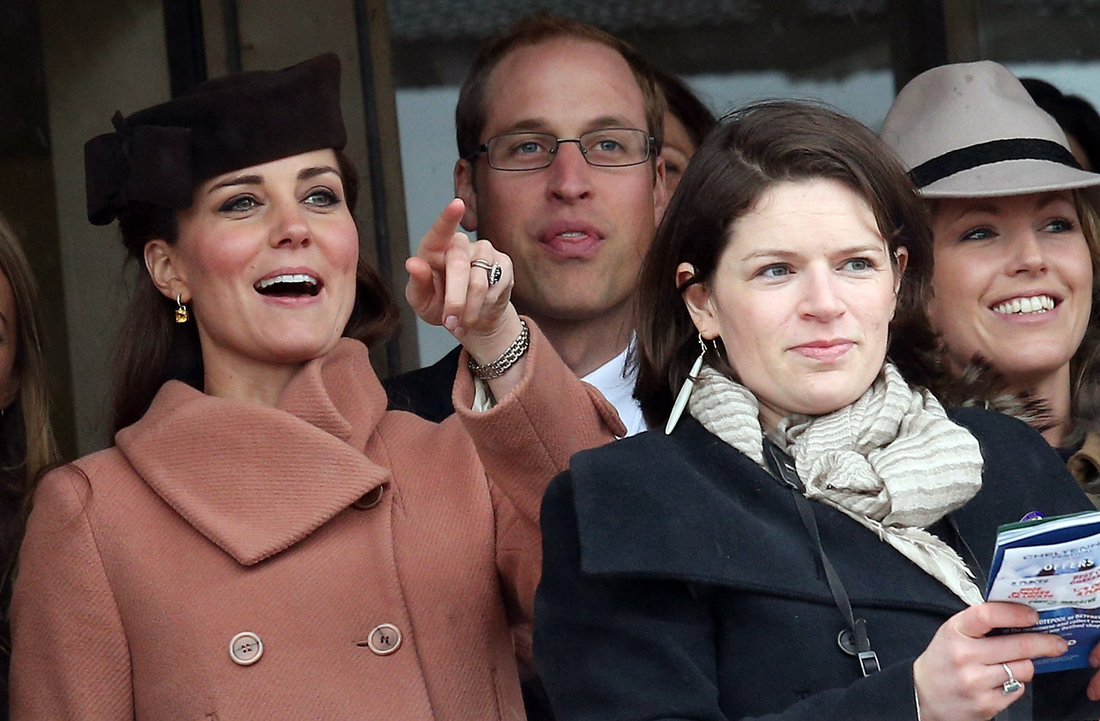 Bill Murray. I love the way he uses his fame to blow the minds of regular folk who happen to cross his path. He would absolutely NEVER quote Caddyshack while playing golf, but I would watch and hope that he would, anyway. 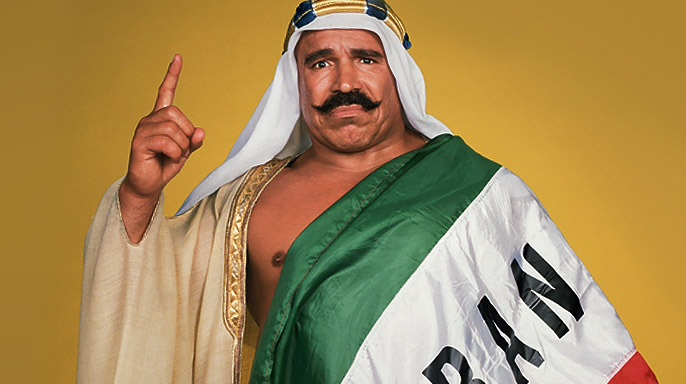 The Iron Sheik: Dude can barely walk, has a crystal ball coming out of his bellybutton and will spend the entire 18 holes screaming quasi-racist tirades about everyone from Jason Dufner to Andrea Bocelli. It will be the loudest and most entertaining round of golf ever, although it may not be able to be broadcast on network television. What with all the cusses.

Nick and Nate Diaz: Make no bones (lol) about it: Nick and Nate will show up for this high as hell. Then they'll get pissed at Phil Mickelson for looking at them funny and try to fight him. Then they'll start punching each other in the dong before finally wandering off into the woods at around the seventh hole and not turning up until several days later.

Glenn Danzig: Because the Masters could use a bloated-ass pasty dude in a see-through mesh top. And he'll probably bring kitty litter. In case anyone needs some.

Jim Nantz Horror Level: Screaming at a 22-year-old intern who is hysterically crying. 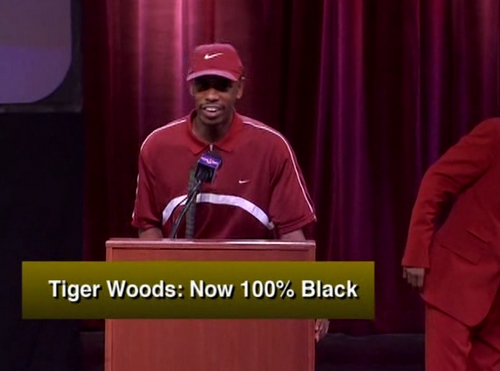 Bill Watterson: "Recluse" tends to be used more pejoratively than I'd like. He's really just the guy who wrote Calvin and Hobbes for a decade, reckoned he was done, and decided he wanted to live in Ohio with his wife and paint stuff. Watterson at the Masters is absolutely, completely implausible for three reasons: first, his body of work indicates that he'd never come within a hundred miles of this institution. Second, I would only want him here if he came purely of his own volition; any sort of "magic wand" teleporter scenario would be a gross violation of the wishes of one of my life's great heroes and inspirations. Third, Watterson f***ing hated comic strips about golf.

Scott Walker: In the 1960s, the Walker Brothers were, by some measures, even bigger than the Beatles in Great Britain. They produced some of the best pop music of all time, but Scott was growing sick of superstardom. Over the following decades, Walker retreated from the public eye, and his music became more eccentric and less accessible. In 2012's Bish Bosch, he sings: "No more dragging this wormy anus / on shagpiles from Persia to Thrace // I've severed my reeking gonads / fed them to your shrunken face."

Dave Chappelle: One of the great comic geniuses of this generation. Disappeared for a number of reasons that would probably be best left for him to explain; among them, nobody would stop endlessly parroting, "I'm Rick James, bitch," because people are awful and don't know what humor is. 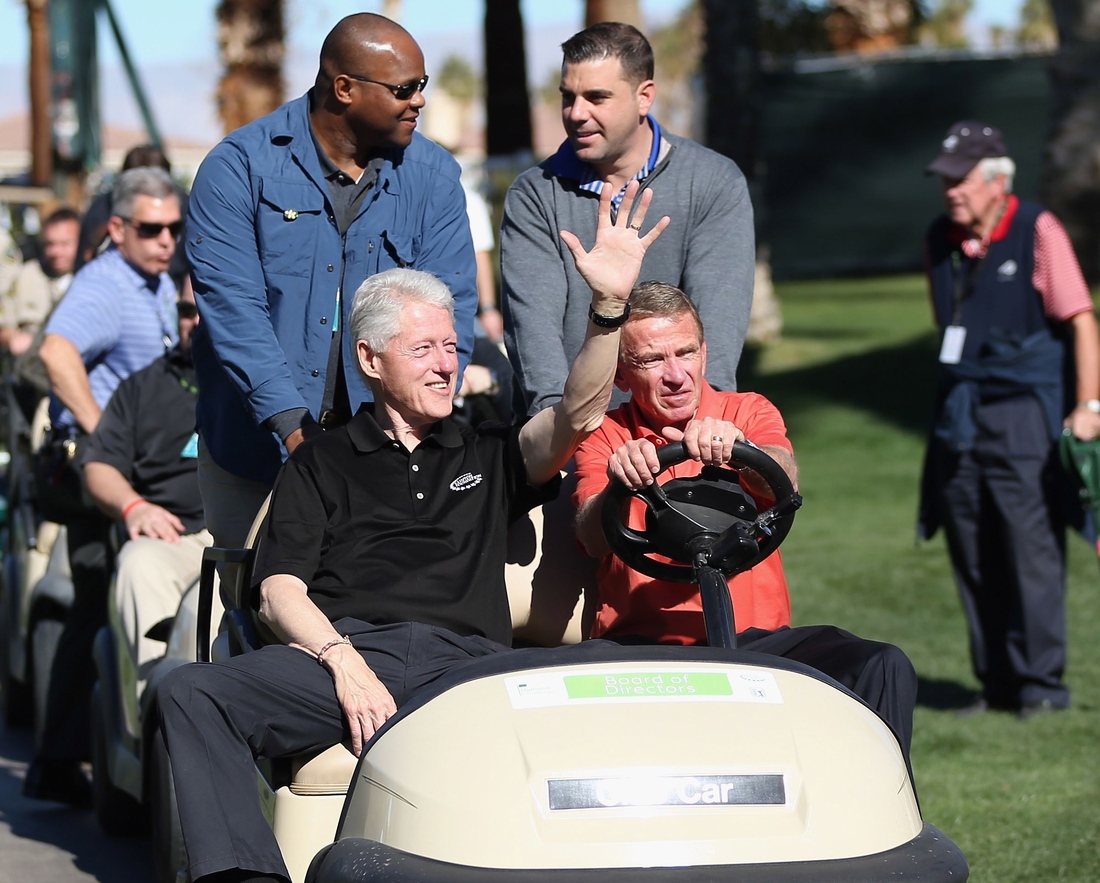 Me. Because I'm great company.*

Bill Clinton. Just read this review of a book on the man:

Don Hewett recalls a "60 Minutes" episode about Vernon Jordan, Bill’s golf pal, when Mike Wallace asked him, "What do you and Bill Clinton talk about on the golf course?" and Jordan answered, "Pussy."

Randy Moss. Because I want to see what Randy Moss would wear to the Masters. Ideally, a mink coat.

Danny Ocean. SPOILER ALERT: This is not a golf outing. This is actually an excuse to steal out of the Masters clubhouse. This is his last big score, and he can retire to a simple life in Connecticut with Julia Roberts. As for me, my cunning during the heist proves to the Ocean gang that I'd be the ideal replacement, and I begin my life anew as an international art thief.

*PS I'd totally take a leak on the azaleas after my first 6 beers. 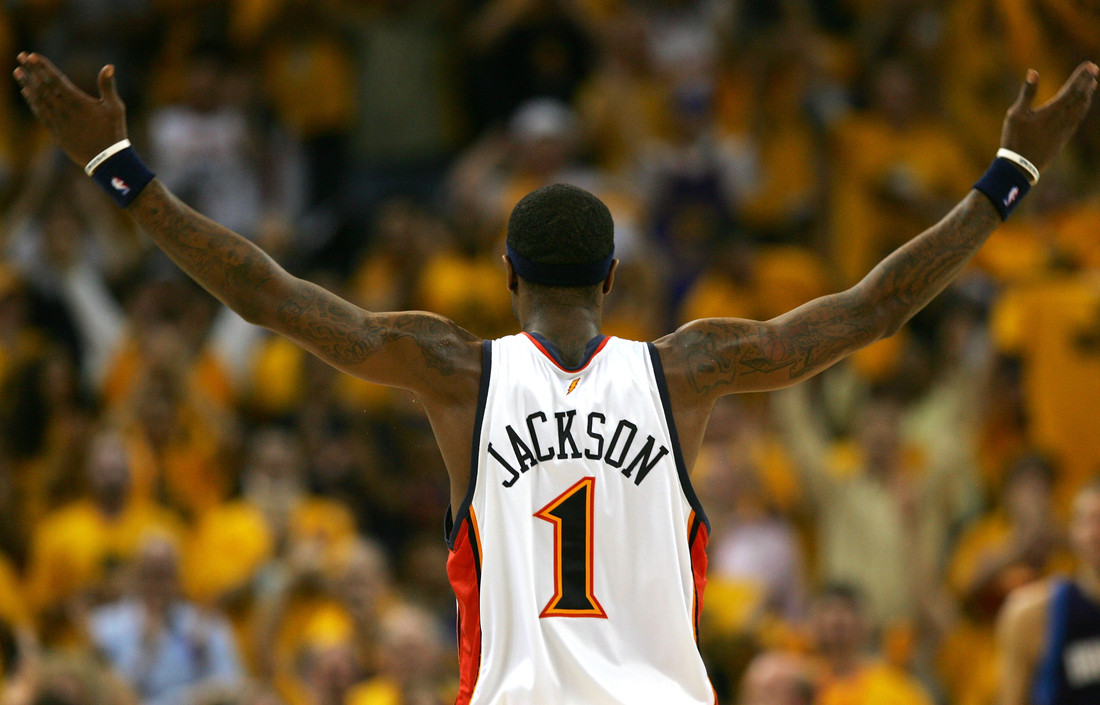 I'm assuming several cameramen can also tag along, and that we'll have individual camera feeds available online. Because I will definitely want to switch between 1) Mamba Cam, where we can see Bryant do burpees in between drives, blame the gallery for every shot he hits poorly and take a helicopter from hole to tee; 2) Young Buck Cam, where we can see Jennings passive-aggressively claim he's better than Kobe while going for the green from 400 yards out; 3) Boogie Cam, where the eyes are always rolling and no one dares call a violation; and most importantly, 4) Captain Jack Cam, where our protagonist (in full pastel plaid gear) re-enacts 18 different gunfight movie scenes using his clubs.

Jim Nantz Horror Level: Drunk with a belt around his neck, leaning on his horn while parked in the middle of a Georgia interstate. 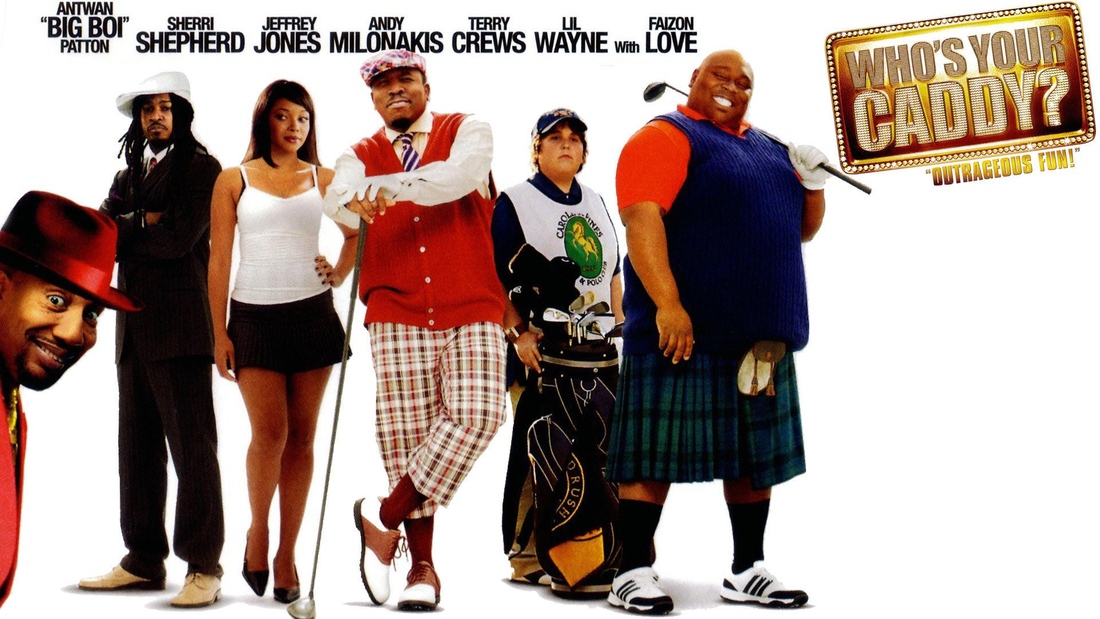 By all means, add your own suggestions in the comments. Together, we can make The Masters weekend even more magical and heart-stopping than it already is.

• Does Tiger need a green jacket to be "back"?

• Arnold Palmer is still cooler than you

• Bubba breaks down at his Masters press conference

Masters 2013: Leaderboard, live updates and more from Thursday's round at Augusta