Bulls vs. Knicks proves insubstantial late-season games can still be a lot of fun

The Bulls' victory over the Knicks to snap New York's 13-game winning streak proves late-season basketball can be fun even without the star players in the lineup.

Share All sharing options for: Bulls vs. Knicks proves insubstantial late-season games can still be a lot of fun

Thursday night's Bulls vs. Knicks game at the United Center was destined to be weird from the start. Joakim Noah and Tyson Chandler were held out with injuries, leaving each team without its star center. Taj Gibson and Kenyon Martin didn't play, either. With a severe lack of rim protectors on each side, both coaches were strong-armed into going with extreme small-ball lineups. The Knicks started two point guards, a shooting guard and two small forwards; the Bulls countered by playing Luol Deng at the four and undersized and gravity-bound power forward Carlos Boozer at center.

The Bulls had memorably ended the Miami Heat's 27-game winning streak on the same floor just two weeks prior and knew what a shot in the arm a win like this could provide the team and its fans. Thursday's game might not have had the same championship feel as that impossible victory over Miami, but the United Center was still buzzing like it rarely has this season.

If only for 48 minutes, no one was stressing about Derrick Rose -- whether he would come back this season, whether he should have come back a month ago, whether it'll ever be the same again with a player this city has invested so much in emotionally. On Thursday, it was just about basketball and the strange transformative powers the sport can have, even when the games that don't appear all that consequential. 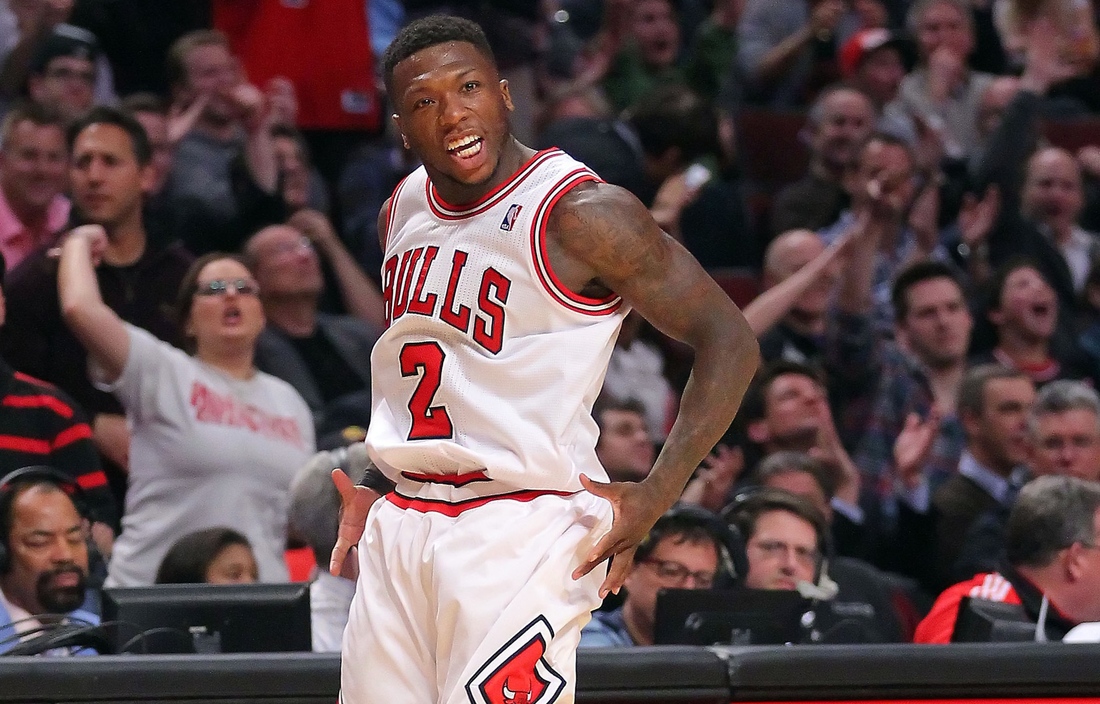 It didn't always look like this one was set to go down to the wire. The Knicks came out red-hot, opening the game by hitting their first three three-pointers to build a 14-2 lead. But the Bulls would chip away and get the deficit down to seven by the end of the first and five by halftime.

The Knicks would build that lead as large as 15 points with five minutes remaining in the third quarter until Jimmy Butler happened. The second-year Bulls wing had been making a name for himself all season and was coming off the best game of his career -- a 28-point, seven-rebound effort against the Raptors in which he shot 10-of-12 from the field. Butler permanently swung the momentum in Chicago's favor with back-to-back steals-to-dunks to ignite the home crowd and kickstart the comeback. 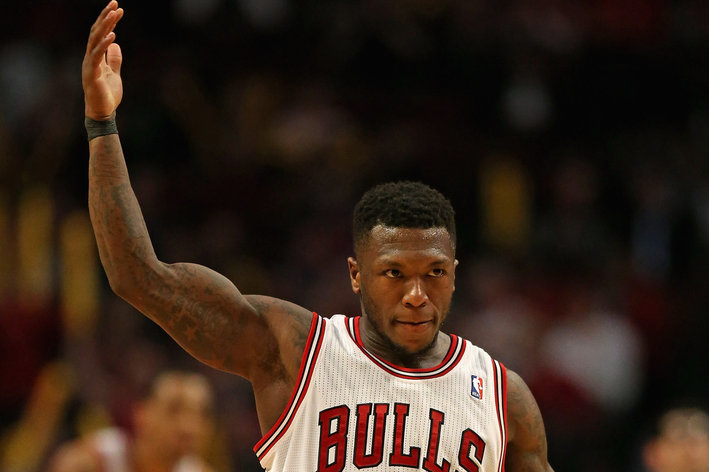 Blog-a-Bull recaps a wild night at the United Center

Butler would eventually get overshadowed by the sheer bravado of Nate Robinson (more on him later), but Thursday only offered more evidence that the Bulls found a gem with the No. 30 pick in the 2011 NBA Draft. Butler went toe-to-toe with the red-hot Carmelo Anthony all night, "holding" him to 36 points on 13-of-34 shooting. Anthony's final line was monstrous, sure, but given how automatic he's been lately, Butler's defense prevented what could have been another 50-point effort. Butler was in his face all night -- the two were even matched up at center at times -- and Carmelo simply couldn't get into a rhythm, even when he was getting buckets.

Even if Butler's 11-point third quarter and tough-as-nails defense got the Bulls back into it, it was Nate Robinson who stole the show. Really, it shouldn't be much of a surprise. Robinson lives for games like this -- when his team is so desperate for points they're willing to tolerate everything else that comes with it. There were plenty of horrific shot attempts and unparalleled levels of taunting, but the Bulls should consider themselves fortunate to have Robinson's offensive firepower off the bench at such a dirt-cheap price. This wasn't the first game he's won the Bulls this year, but it might have been the most memorable.

Robinson hit a couple quick shots to open the fourth to put the Bulls up nine, and at that point he was basically a pro wrestling heel.

Robinson and Knicks forward Steve Novak have beef dating back earlier this season when Robinson jacked Novak's signature 'discount double check' taunt and Novak called out "little Nate" for his shenanigans after the game. Robinson has not forgotten about this. It started late in the second quarter when Robinson hit a three-pointer from the corner over Novak and immediately started taunting him:

Ohhhh, it didn't stop there. After Robinson hit an absurd 25-foot three in the fourth to get the Bulls' lead up to seven, he unleashed......well, this:

Of course, the Knicks would make a comeback. The Bulls went cold from the field and Carmelo and J.R. Smith were able to hit a few shots and get to the line for some easy free throws, and suddenly the game was tied with :14 seconds left. Deng drew contact on the Bulls' final possession of regulation, but there was no foul called. Anthony got a great look at a midrange jumper at the buzzer, but it somehow careened off the rim.

Then it was overtime at the United Center, and it only provided another platform for Robinson.

Nate hit a ridiculous layup to get the scoring started in the extra session and would finished with eight of the Bulls' 13 points in overtime. Robinson finished with a season-high 35 points and the Bulls had ended their second double-digit winning streak of the season with a 118-111 overtime victory. It really could have been the third long winning streak Chicago halted, if not for a controversial ending against the then-streaking Nuggets last month.

Insane. There were plenty of other hilarious things about this game:

-- Nate tried to throw an alley-oop to Rip Hamilton in transition at one point. It caused Thibodeau to throw his towel on the floor and Chris Copeland almost slipped on it:

-- Speaking of Copeland: the fact that he started an NBA game at center in 2013 is just completely astounding. He was solid all night, hitting three three-pointers to finish with 14 points in 29 minutes. Please check out Flinder Boyd's profile of New York's 29-year old-rookie and his long, strange journey to the NBA if you haven't already. It's worth your time.

-- The atmosphere inside the United Center seemed really special. This lady feels me: 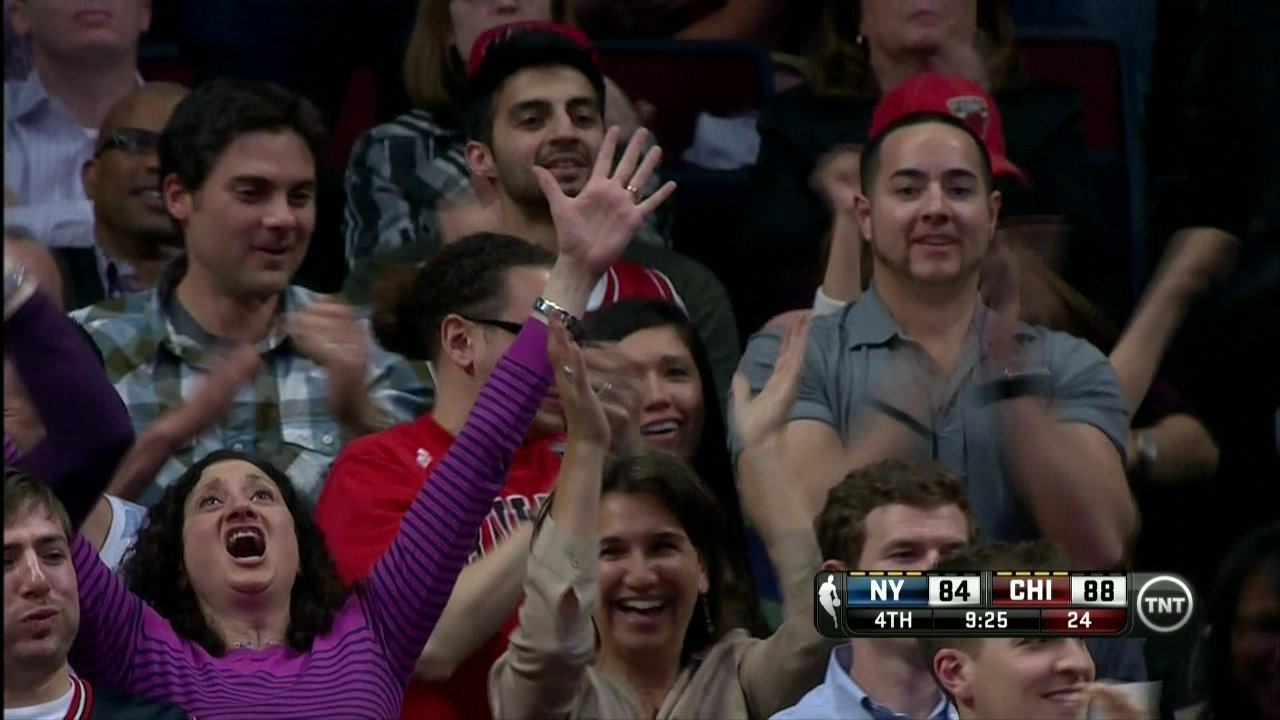 -- This game produced a million great GIFs, but my favorite two had nothing to do with the game itself. Don't act so surprised, Carlos Boozer:

And there's Luol Deng, just totally killing it during this bench shot:

So cerebral, even in celebration.

-- How awesome is Jimmy Butler? Check this:

Let this be your weekly reminder that Tom Thibodeau is kind of insane, and that lesser men would have tuned him out a long time ago. "The Doug Collins Rule" doesn't exist in Chicago, even if it totally could.

Also, there's this, from K.C. Johnson's gamer at the Tribune:

At the morning shootaround, Butler had called Anthony "great" before adding defenders can "get in his head a little bit." Anthony missed 21 shots.

Ultimately, this Bulls season will be remembered for the Derrick Rose saga, all the other injuries and the disappointing offseason that started it all, but maybe it's time to give the Bulls credit. Tom Thibodeau has gotten his team to play hard all season, and it's culminated in a couple of unforgettable victories in the second half of this season. Thursday was just another example of why the NBA regular season can be so much fun and why people who don't watch pro basketball until the playoffs are sorely missing out. There's drama to be had every night, and the Bulls and Knicks proved it again on Thursday.