BOSTON — My family moved from the Boston suburb of Belmont to New Jersey when I was six years old. One day a teacher asked us to name our favorite holiday. With Christmas and Thanksgiving in a dead heat, I piped up and put in a vote for Patriots' Day. This inspired some confusion. What, exactly, is Patriots' Day?

"That's when everyone has the day off to watch the Red Sox," I explained. "There's also a marathon and a parade."

My teacher still didn't really believe me so she asked my mom at one of those parent-teacher conferences who confirmed the details. If you're not from here you don't really know. How could you?

I went to my first Patriots' Day Sox game in 1997. It was an incredibly gorgeous sun-splashed day, three weeks after the freak April Fools Day blizzard that dumped more than two feet of snow on us. We sat in the bleachers, heckled Brady Anderson and watched the Sox beat the O's. In a month I'd be out of grad school and heading across country to my first real journalism job in faraway Oregon. It felt less like the first real day of spring than the last day of summer. I didn't want to let that day go. I still don't.

About a decade later my future wife had an epiphany. She was walking with friends back to Cambridge from the marathon when she told them she was falling for this guy she had met from Philly. I moved back to town that summer. We talk about it every time we pass that spot over by M.I.T. That's where I parked my car and headed into town. 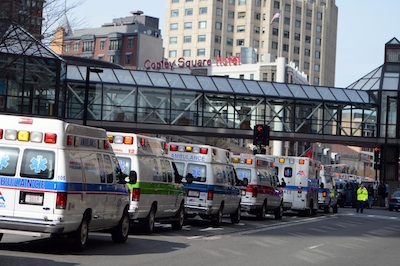 Full coverage of the tragic events at the Boston Marathon on Monday.

We don't live here because it's easy. You call us Massholes, but we don't care because we come by our grumpiness naturally. The streets are too narrow and we all drive like maniacs. The T is always delayed and crammed with students. The winters are too long and spring is only a rumor. At home we're piled into triple deckers so close that we know what our neighbors have for dinner each night.

Marathon Monday is the one day we all act civil to each other. Strangers give up seats on the Green Line to runners wrapped in their silver blankets and we line the route cheering for people we've never met. In the old days the Eliot Lounge would pour cold ones for anyone who finished the race.

Everyone knows someone who is running. There are only two ways into the marathon. Either run an insane qualifying time or raise money through charity.

We'll train longer and harder and more of us will run.

The bombs went off a little before 3 p.m. That's when the people you know were finishing. The students and the moms and dads and the people who decided to do something special one time in their life. The ones who raised money for their causes and trained through the snowy morning jogs just to prove something to themselves or the people they love. Maybe you've even done it yourself, or you make a vow to be out there next year. This is our day to be human again after staying inside through the brutally long winter.

I made my way into Boston across the Mass Ave. Bridge. The cops had already shut down the traffic heading into the city and people were making their way across the bridge on foot. You'd think that many people would make some kind of a sound, but it was quiet aside from snippets of conversation, the buzz of a helicopter circling overhead, and the wail of sirens in the distance.

Mass Ave was as it always is on Marathon Monday. Drunk college kids falling out of bars, acting like drunk college kids. Runners meeting with their families. An older man stopped me to chat. We watched some of the runners on a corner over by Berklee. "How do they do that," he asked me. "How do they run that far?"

Did he not know?

I suddenly wanted to get far away from here. Cops had blocked off every intersection leading to the finish. Getting to the scene would be impossible and really, what did I hope to find? Some redemption among the ruins, perhaps. A glimpse of the chaos? I honestly didn't know.

That's when I saw an old photographer friend. We decided to head to the Common where officials had diverted the runners. Along the way we met up with more writers who had camped out at a bar on Commonwealth Ave. I saw friends I hadn't seen in far too long from the Globe and Statehouse News and the Phoenix. There was comfort inside, but that wasn't the reason any of us were there.

I walked toward the Common where I found a group of young women from the Louisa Holman Fisk House, a cooperative residence for female grad students at Boston University. They had set up a makeshift first aid station with water, coffee and granola bars. Anyone was welcome to come in and charge their phones.

"We just wanted to do something."

Most of the runners who came by seemed to be in shock. They were lost, hungry and tired. It was getting cold out. "We just wanted to do something," one of grad students said, so here they were offering some warmth and hydration.

Little scenes like that were happening all over the city. Hundreds of people offered beds and rooms to displaced runners. Others offered directions or a working cell phone.

I continued down Comm. Ave past the police barricades and the armored cars. The Public Garden was silent and practically empty. Across the street, the Common had become a staging area with the cops out in full force. The city was a combat zone.

I walked back to Cambridge along the same route past the blockades. The bridge was mostly empty now and the traffic was backed up on Storrow Drive. It was like any other day with the sun setting over the Charles River and the Zakim Bridge hanging majestically in the distance. I turned to look back at Boston. Quiet, dignified, beautiful.