The semi-emergence of Jeff Green has allowed the Celtics to breathe new life into one of their most-used offensive sets.

This is the first year the Boston Celtics have had Jeff Green healthy for an entire season. He came over in midseason in 2011 and never really found his place. Last year's season was over before it began because of a heart ailment.

As such, Doc Rivers has tried to figure out ways to get him in the offensive flow; to be Good Jeff, if you will. One such way: using him the same way the Celtics have used Paul Pierce and other guards over the years.

Even with Rajon Rondo healthy, the Celtics have thrived using a dribble-hand-off set that gets the ball to a wing player on the move curling from the corner. Kevin Garnett is one of the league's elite high-post players, and Pierce is extremely versatile on the wing.

But with Green now needing to get in the flow, Rivers has used him in the Pierce role, even when Pierce is in the game. With his long strides and finishing ability going right, Green has proven to be an excellent fit. And while the Celtics' offense has been a weird mixture of concepts since Rondo's injury, Green's ability to play the Pierce role in this particular set has been instrumental in his second-half improvement.

The video above therefore features variations of the dribble hand-off set with Green, Pierce and other Celtics wings. This is the Celtics' pet play.

ORIGINS: The Celtics have been running this play since Pierce, Garnett and Ray Allen came to Boston.

BREAKDOWN: We're going to look at a sequence from a road game against the Clippers in late-December. Rondo is not on the floor for this set. It starts at the 1:57 mark of the video.

As usual, the play begins with a guard (Courtney Lee, in this case) dribbling to the left wing, then throwing the ball to Garnett in the high post. 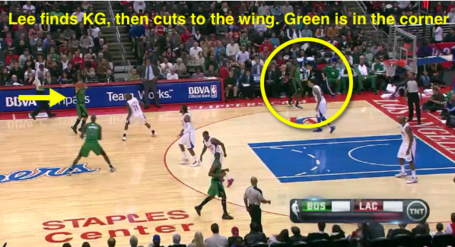 Lee then goes to the wing, where he'll set the initial screen to try to free Green. As this happens, Garnett dribbles to the wing to time his hand-off at the precise moment Green's man, Matt Barnes, will be cut off. 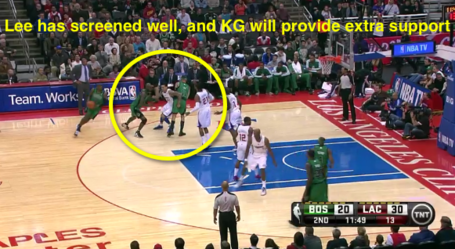 The Clippers actually make a heads-up play here, keeping Eric Bledsoe in the lane as Barnes fights through. 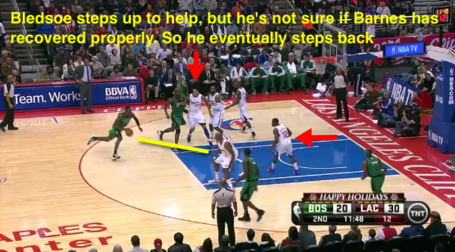 But two things prevent L.A. from defending this properly. First, Bledsoe thinks Barnes is closer to recovering than he is and cedes his position. More importantly, though, Green's athleticism makes a huge difference. He finds a way to cover that space with one long stride, shooting through the tiny gap between Barnes, Bledsoe, Ronny Turiaf and Lamar Odom. This is why putting Green on the move in a dribble hand-off situation can be so beneficial. 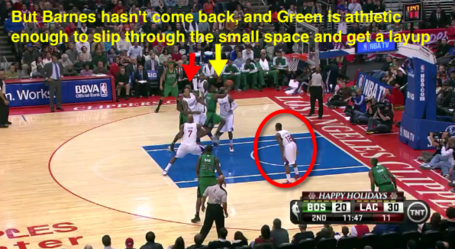 That is a difficult layup, but Green spins it through.

FREQUENCY: The Celtics used to run this all the time, but have displayed it less often as they close the season. I'm not sure why.

VARIATIONS: The Celtics will station different players in the Lee role, whether it's a point guard or another big man. There was also one funky set at the end of the video where Pierce and Green were the two players on the wings. Instead of screening for Pierce, Green moved as if he was going to get the hand-off, then cut through to distract the defense. Pierce ended up getting the ball and getting to the rim.

CAN IT BE DUPLICATED: Yes, but you need big men who can execute dribble hand-offs well. It's harder than it looks.

HOW CAN IT BE DEFENDED? The best way is to cut under the screens and force Green or Pierce to beat you from the perimeter. Tayshaun Prince defended the play well in the first play in the video, but just got beat by Green off the dribble.

COUNTERS TO THAT DEFENSE: Green doesn't have to shoot or drive on this play. He can dump it off to Garnett or another big man rolling to the rim off the screen. If the defense overplays the roll man, the guard that sets the initial screen is often open for three. This set also folds nicely into a quick pass to the wing and a post-up for the big man.