The Chicago Bulls have been manufacturing offense all season without Derrick Rose in the lineup. One primary way: a new wrinkle on a common motion offense set.

Share All sharing options for: Chicago Bulls' pet play: The 4-out, 1-in curl

When Tom Thibodeau's Bulls traveled to D.C. to face the Wizards last month, one reporter in the scrum asked him to compare the injuries to Derrick Rose and John Wall. Thibodeau's response? The Bulls at least knew Rose would be out for a while (though not this long), so they were able to make some adjustments to their offense.

One such adjustment: an adaptation of a common corner curl play. Many teams run a perimeter player off two screens circling to the top of the key to receive a pass for a jumper or layup. The Bulls, though, changed things up by stationing four players on the perimeter, starting the ball on one side, swinging it around to the other and immediately starting the curl. Different players are involved in the cut, throwing the defense off.

When timed right, the play has been very successful for them. Here's a breakdown of that pet play.

ORIGINS: Almost every motion offense has a version of this cut.

BREAKDOWN: We're going to look at a sequence from a road game against the Hornets in mid-February. This is the second offensive play of the game and begins at the 15-second mark of the above video.

The play begins with four Bulls on the perimeter. Rip Hamilton is in the left corner and receives a pass from Kirk Hinrich. Joakim Noah stands at the top of the key, while Luol Deng is on the opposite wing. Carlos Boozer is the lone Bull near the paint. 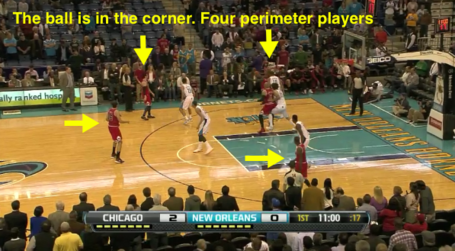 As soon as Hamilton receives the pass from Hinrich, he throws it right back. This motion, while seemingly trivial, is important because it kicks-starts the ball movement, which acts as something else for the Hornets to think about as they process the Bulls' play. 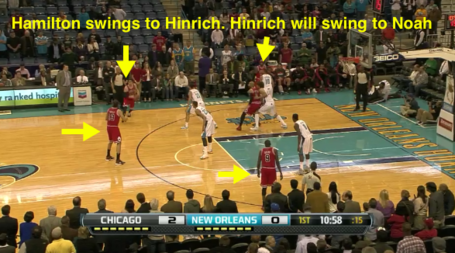 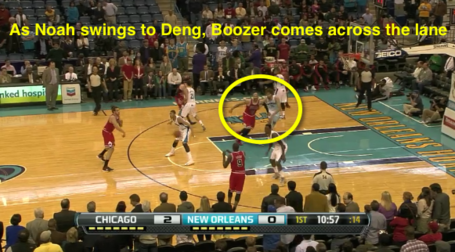 The Noah pass to Deng triggers two simultaneous actions. Hinrich immediately turns to set a brush screen for Hamilton, the first of two screens Rip will receive on that side. Meanwhile, Boozer will come across the lane looking for a post-up, which further confuses the defense.

The Hornets elect to switch the Hinrich brush screen, which works to their disadvantage. Meanwhile, Deng enters the ball to Boozer in the post. 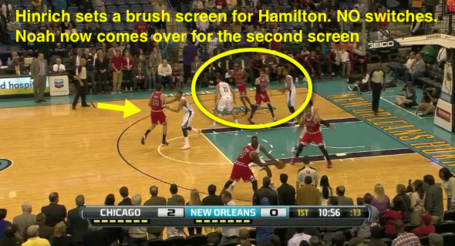 Why is this bad for New Orleans? Greivis Vasquez has no frame of reference for Noah's screen, and by the time he recognizes it, he's taken a poor angle. Noah screens him off and Hamilton reads Vasquez's position beautifully, curling towards the rim instead of flaring to the perimeter. 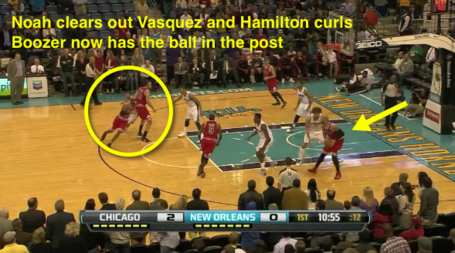 One other element to this play: Deng's cut across the lane. It looks like he's getting in Hamilton's way, but he times it perfectly to distract his man, Al-Farouq Aminu. Aminu has to worry about Deng, so he doesn't step in Hamilton's way to help. 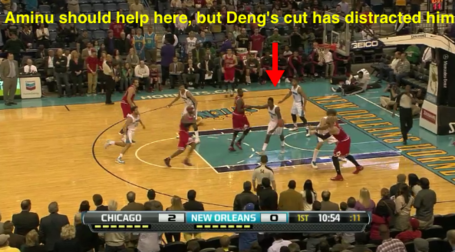 That leaves Hamilton a wide-open 12-footer that he knocks down. 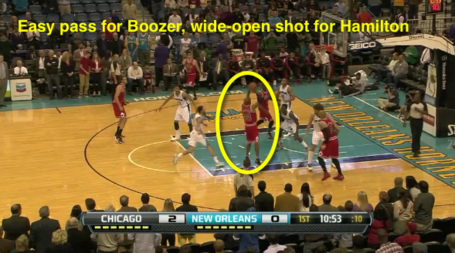 FREQUENCY: The Bulls will usually run this multiple times a game, though they go games without trying it.

VARIATIONS: Only rarely will the ball actually be entered into the post by the wing player. When it isn't, that usually means the man in the Hamilton role is popping to the perimeter.

CAN IT BE DUPLICATED: Yes, by any team that has wings who are good cutters and runs a lot of motion sets.

HOW CAN IT BE DEFENDED? The Hornets defended this very poorly. Avoid switching on the down screens and try to play behind them rather than locking and trailing the cutter. Another method: have the man guarding Noah step out into the cutter's path as if he's hedging a pick and roll.

COUNTERS TO THAT DEFENSE: This set folds neatly into a high pick and roll, so that's the obvious one. Also, the wing player can just dump the ball into Boozer in the post if the curl cut isn't there.