Brooklyn Nets pet play: The many cross-screens for Brook Lopez

Brook Lopez has emerged as one of the league's best offensive centers, and the Nets have many ways to get him open.

Share All sharing options for: Brooklyn Nets pet play: The many cross-screens for Brook Lopez

The Brooklyn Nets have a team of many new parts, a point guard that prefers to generate looks in secondary-transition situations and a new coach at midseason. As such, their offense isn't the most intricate series of plays in the world. But there is one concept, if not a set play, that has become common for them.

That concept? Getting Brook Lopez the ball on the move.

The Nets center is having a career year, and one reason is that the Nets have pushed the boundary of traditional cross-screens. The cross-screen -- a pick set by a perimeter player on a post man's defender to give him that extra split second to get good position on the block or elsewhere -- has been in the NBA for decades. The Nets, like so many other teams before them, set cross-screens from block to block, as well as from elbow to block. But they also have tried a number of variations that get Lopez moving quickly and take advantage of his touch near the basket.

ORIGINS: As noted above, the cross-screen is an age-old concept in basketball.

BREAKDOWN: We're going to focus specifically on the wrinkle used against the Bucks in a late-December game in Milwaukee. This breakdown begins at the 20-second mark. 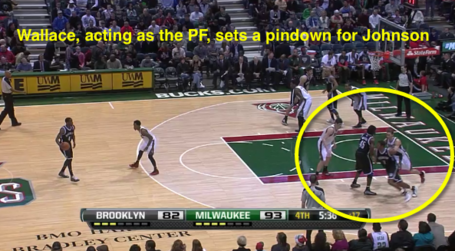 The Nets are running a small lineup with Gerald Wallace at power forward. This particular set is initiated when he sets a classic pindown screen for Joe Johnson. As Johnson curls to the right wing, Wallace will post up Ersan Ilyasova, making it look like this is a classic mid-post isolation. 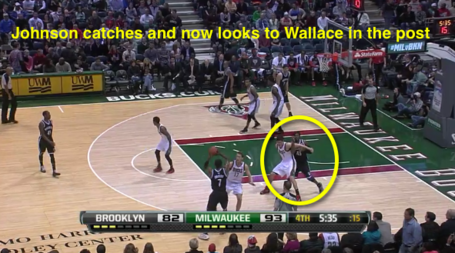 That will occupy the defense's attention. Meanwhile, Johnson pretends to casually clear out before going to set a cross-screen on Lopez's man. 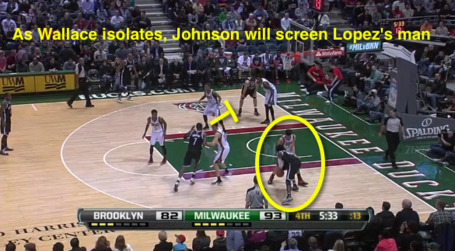 Wallace's presence inside the three-point line changes the spacing here. The play looks like one to get Lopez the ball on the block in an isolation, but that can't happen with Wallace so close to the block himself. This creates a moment of confusion for the Bucks' defense, which is what the Nets want. They have no intention of actually sending Lopez to the block. Instead, Lopez is coming to the middle of the lane. 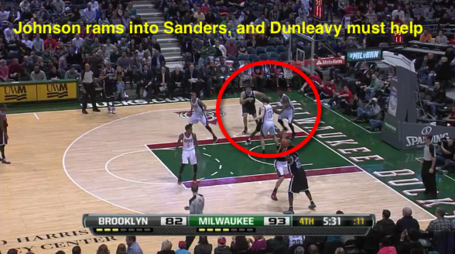 The Bucks actually defend this fairly well. Mike Dunleavy, who is guarding Johnson, tries to position himself in the path of Lopez's cut. But it's not good enough because Lopez is coming to the middle of the lane, not the block. That inch of a difference in Dunleavy's positioning is enough of a lane for Wallace to make this pass. 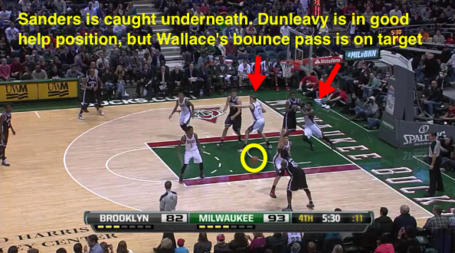 From there, Lopez has an open six-footer, a shot he hits with regularity. 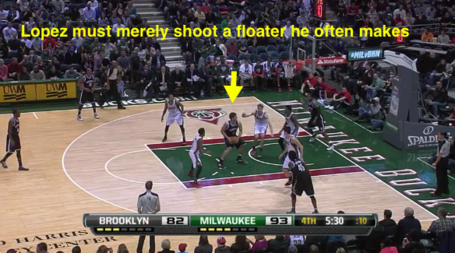 FREQUENCY: The Nets set many cross-screens for Lopez every game, but the different variations are each used very infrequently.

VARIATIONS: There are too many to count. Sometimes, the Nets will set cross-screens for Lopez to come into the lane out of Jerry Sloan-style Flex sets. Sometimes, a guard will run through the lane and then just slam into Lopez's defender, like Deron Williams did in the first clip in the video. Other times, Reggie Evans or another big will surprise you with a quick screen to free Lopez.

CAN IT BE DUPLICATED? Yes. In fact, the Jazz do a lot of similar things with Al Jefferson.

HOW CAN IT BE DEFENDED? The way the Bucks did is about as good as you can do, only with slightly better positioning.

COUNTERS TO THAT DEFENSE: One reason this play works so well is that the guard setting the screen is always a threat to run back up to the top of the key. The defense must be cognizant of that action, especially when that screener is someone as dangerous as Johnson or Williams. That diverts attention away from Lopez.