Josh Smith and Al Horford are two of the most skilled big men in the NBA. The Atlanta Hawks' pet play allows Larry Drew to take advantage of those attributes in a unique way.

Share All sharing options for: Atlanta Hawks pet play: The 4-5 pick and roll

Possible future max-contract power forward Josh Smith is many things. He's a lethal left-hander that can do whatever he wants in post situations, but he's also a frustrating on-court thinker that settles for long jumpers, goes through stretches where he doesn't give proper effort and is easily fooled in help defense situations.

All this said, if Smith goes elsewhere next summer, the Hawks will miss one key element of his game that has allowed them to run possibly the best late-game play in the Eastern Conference. Very few power forwards can act as the ball-handler in a pick and roll. Even fewer possess the passing touch to deliver a lob from inside the three-point line with pinpoint accuracy.

Smith can do both of those things. That's why the Hawks' pet play is a 4-5 pick and roll between Smith and Al Horford that starts from the high post. Horford rubs off Smith's man and slips to the rim, and Smith finds him with an on-point lob pass for the layup or dunk.

ORIGINS: Atlanta isn't the first team to run this kind of play. The Los Angeles Lakers experimented with it last season as a way to involve both Pau Gasol and Andrew Bynum. Mike D'Antoni's Suns also ran a similar variation of the play in 2006 with Shawn Marion screening for Boris Diaw.

But the versatility of Smith, the screening, slipping and catching ability of Al Horford and the presence of great shooters in the corners makes Atlanta's 4-5 pick and roll so difficult to defend.

BREAKDOWN: We're going to look at the first play in this video, which took place in an early-March game against the Celtics.

The play begins with Smith in the high post waiting to receive a pass from Jeff Teague. Horford is down on the block and will come to set the screen. As this is all happening, Kyle Korver and Anthony Tolliver, two dangerous three-point shooters, switch sides to distract their defenders. 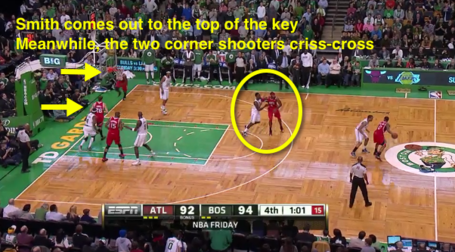 Teague enters the ball to Smith and cuts away to the wing. By now, the two shooters are in the corners, and Horford is ready to come out for the screen. 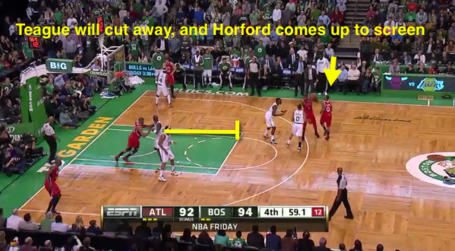 This play is originating higher than the Hawks ideally would have liked, but it works out anyway because Horford sells the pick beautifully. Watch him plant off his right foot, then slip to the rim. 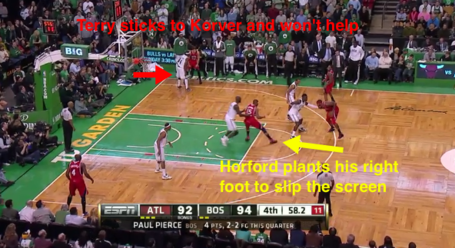 The text in red also bears mentioning. Because Korver is such a dangerous shooter, Jason Terry doesn't even care about helping on the primary play. That's how a shooter impacts the game in ways that go beyond his three-point percentage. Paul Pierce is cheating a bit off Tolliver in the opposite corner, but it's not enough, especially because Horford ends up slipping on Korver's side. 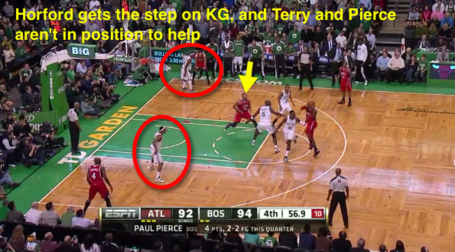 Smith delivers a pinpoint pass and Horford dunks it. 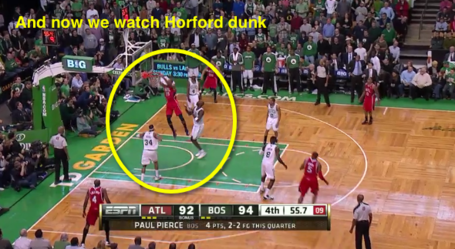 FREQUENCY: Once or twice a game, often in critical situations late in the fourth quarter.

VARIATIONS: It's hard to alter too much with this play. Sometimes, the Hawks will enter the ball in a HORNS set, and sometimes, they'll bring Horford out from under the hoop. Also, the point guard that throws the entry pass to Smith cuts away from the play differently. Every so often, the corner shooters will criss-cross rather than staying where they are.

CAN IT BE DUPLICATED? Theoretically, yes, but it requires two incredibly skilled big men and excellent perimeter shooters at all other positions. Few other teams have those elements.

HOW CAN IT BE DEFENDED? Teams have found success by ducking under Horford's screens, following him to the basket and forcing Smith to beat them from the perimeter. Smith's jump shot is inconsistent and he can be slow making decisions.

COUNTERS TO THAT DEFENSE: Smith has sometimes demonstrated that he can drive to the basket with his strong hand if the defense runs to Horford. In addition, Smith's passing ability allows him to kick to either open corner shooter if the defense helps.