The Knicks have been creative in their use of pick and rolls all season. Mike Woodson's wonkiest one of all: a pick and roll that involves three players screening for his point guard.

When Mike Woodson was the coach of the Atlanta Hawks, he earned a deserved reputation for refusing to run cohesive offensive sets. It's because of Woodson that ISO-Joe, a phrase reserved for the ball-dominant ways of current Brooklyn Net and former Hawk Joe Johnson, has become a common part of the NBA fan's lexicon.

This is not the coach one would expect to popularize elaborate offensive schemes. Yet in New York, Woodson has done just that.

The Knicks have a superstar that loves isolations in Carmelo Anthony, and they have a sixth-man sniper that doesn't mind dribbling in J.R. Smith, but Woodson has not settled on just using his stars' skills. While he relies on their skill, Woodson has also incorporated a number of unique ball screens to aid them and others, most notably his two X-factors in Raymond Felton and Tyson Chandler. These ball screens come from all over the court, are set up by many different actions and involve many different players.

The most wonky of the bunch is the triple ball screen. This is the Knicks' pet play.

The godfather to this play is probably the double ball screen that was popularized by Doc Rivers when the Big 3 arrived with the Boston Celtics. Rivers would often use both Kevin Garnett and Kendrick Perkins in a pick and roll to take advantage of their screening ability and their diverse games. While Perkins can only catch and finish going to the rim, Garnett was an adept mid-range shooter that preferred to hang on the perimeter. As they darted in different directions, the defense inevitably ended up confused.

The triple ball screen incorporates this thinking, but on steroids.

We're going to look at a version of the play from a game against the Heat in December. It is at the 1:06 mark of the video.

The play begins with the point guard on one side and three players bunched together on the opposite side. Before the play starts, the fifth man cuts through to the opposite corner. It's essential that this player be a proficient outside shooter so that his man doesn't help on the primary action. In this case, that fifth player is Jason Kidd. 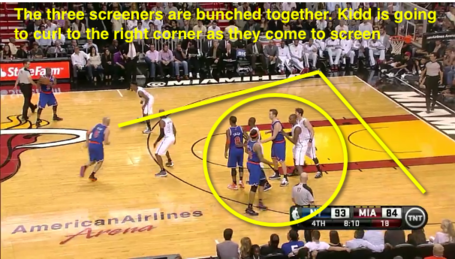 This action is important because it distracts the defense. As that happens, the first screener will come to the ball. In this case, that's J.R. Smith. 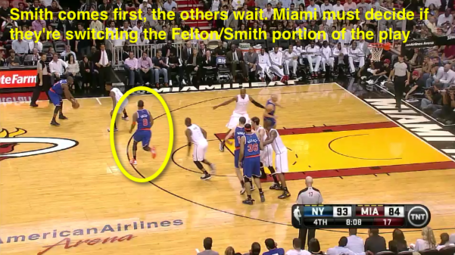 Bringing Smith first puts Miami in a tricky position right away. Most teams switch screens involving guards, but the Heat must also worry about the two screens to follow. Is it advantageous for Dwyane Wade and Norris Cole to switch in this case, or should they stay with their men? They elect to switch.

But as they make that decision, the second screen comes. In this case, it's Steve Novak, a player you can't leave open beyond the arc. Because of that, Mike Miller, Novak's man, stays at home. 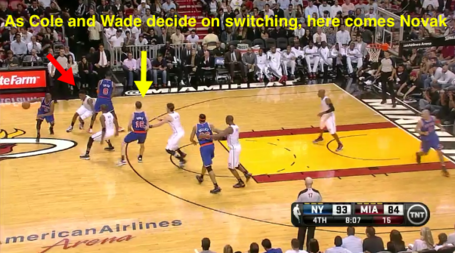 Meanwhile, Wade is now on Felton. When that final screen from Rasheed Wallace hits, the Heat try to have Wade go underneath and Chris Bosh jump out to divert Felton's path. 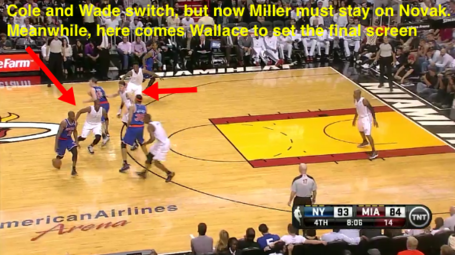 This is what the Knicks want you to do. For this defensive strategy to work, Bosh must completely divert Felton's path, but that's difficult to do when he also has to think about everything that happened before the final screen. In this case, Bosh doesn't come out high enough and Felton has an easy passing lane to Wallace for a layup. 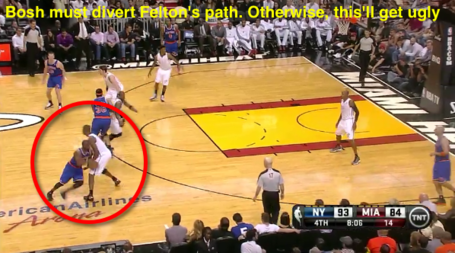 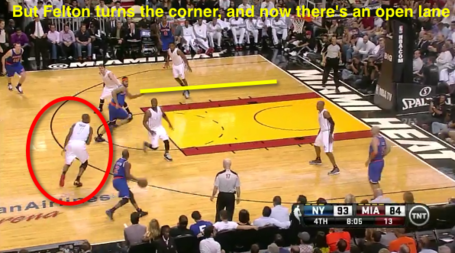 The presence of Kidd in the corner is the final piece of this play. Because Kidd has the reputation of being a good shooter (he was over 50 percent at this point in the season), Allen is reluctant to leave him to help on Wallace. This gives Felton an easy lane to deliver the pass to Wallace for the layup. 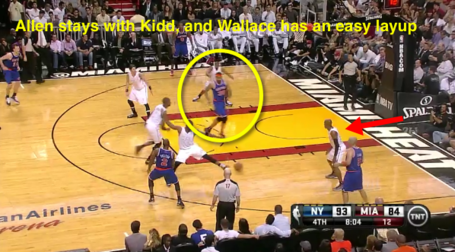 VARIATIONS: Different players are in different spots in the triple screen on the ball. Some versions have the fifth player spotting up in the corner already rather than cutting to that spot.

FREQUENCY: The Knicks limit the exposure of this play, only running it once or twice every few games. You may only see it a handful of times in the next few weeks.

CAN IT BE DUPLICATED: Certainly. A team must have good perimeter shooters, a heady point guard and one big man adept at rolling to the rim.

HOW CAN IT BE DEFENDED? The best way is to have your help defenders stay on their screeners and the primary defender duck under all the screens to force the point guard to beat you from the perimeter.

The other method is to trap the ball-handler so vigorously that it throws off the timing of the entire set. This is undoubtedly the method the Heat will use if they face the Knicks in the Eastern Conference Finals. But that trap better be precise. As you can see, the rest of the defense becomes extremely vulnerable if the point guard turns the corner.

COUNTERS TO THAT DEFENSE: If the shooters aren't open, the point guard can use the space given to him to attack the basket using a hesitation dribble. The play where Felton got by Deron Williams and opened up an opportunity that ended with a Chandler offensive rebound is the best example of this. Just because the jumper is presented doesn't mean the point guard has to attempt it.