The Miami Heat's pet play is a set swiped from the Boston Celtics' playbook that primarily features Ray Allen, but Miami's version has evolved to include more players that confuse the defense in many different ways.

One of the reasons Ray Allen left the Boston Celtics to sign with the Miami Heat was that he was fed up with being a decoy in all of Boston's sets. All that running through a maze of screens gets tiring when you aren't consistently getting the ball.

That left Miami with a bit of a dilemma. Allen's ability to be a decoy is his primary value at this point. Never leave Ray Allen, says every NBA coach that has seen all those threes swish through the net over the years. But by doing that, they open up opportunities for the other four players on the court. The Heat would have been foolish not to exploit that.

So, how did the Heat manage to use Allen as a decoy without alienating him? By expanding Boston's old Ray Allen play.

A popular out-of-bounds call for Doc Rivers in late-game situations in years past, the Ray Allen Play calls for the sharp-shooter to curl off a down screen from one corner, set a ball screen at the top of the key, then fade to the opposite wing as a big man sets a flare screen. The Heat, too, get Allen many open opportunities off that framework, keeping their newcomer happy. But they also added several elements to the set, incorporating a high pick and roll and sometimes placing Allen closer to the ball rather than in the corner.

This is the Heat's pet play.

ORIGINS: As noted, this was swiped from the Celtics' playbook.

BREAKDOWN: We're going to show you an evolved version that ends in a pick and roll rather than the version that ends with an Allen score. That way, you can see how Allen's initial move confuses the defense. You can see this full play at the 3:38 mark of the video. 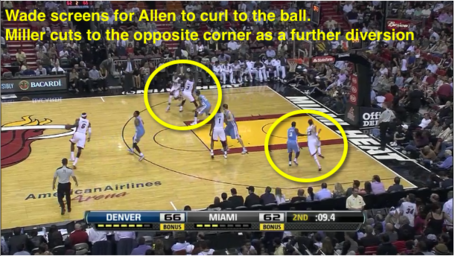 The play begins with Dwyane Wade screening for Allen to come from the left corner. In addition to that, Mike Miller will cut from the right corner to the left to give the rest of the defense something else to think about. The Nuggets elect to haveDanilo Gallinari stay with Allen rather than have him switch with Corey Brewer, who is guarding Wade. 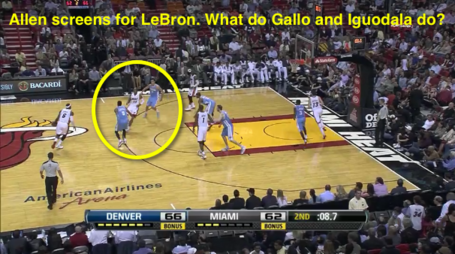 Allen then comes to the ball to screen for LeBron James, which puts Denver's wings in a quandary. Do Gallinari and Andre Iguodala switch? Should they stay at home? They elect to switch, which is exactly what Miami wants. 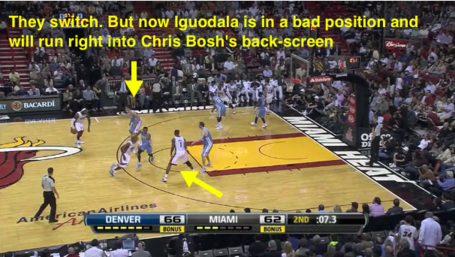 By switching, Iguodala has put himself in a tough position once Chris Bosh comes to set the flare screen for Allen. He's now trying to fight over the top on Allen, which will run him right into Bosh's pick.

This is where Allen's reputation becomes valuable. Kosta Koufos, guarding Bosh, has surely heard the cries from his coach and fans to NEVER LEAVE RAY ALLEN OPEN. Therefore, he decides to switch with Iguodala to make sure Allen doesn't get a clean look off the flare screen. By doing that, though, he has ceded help position at the rim. 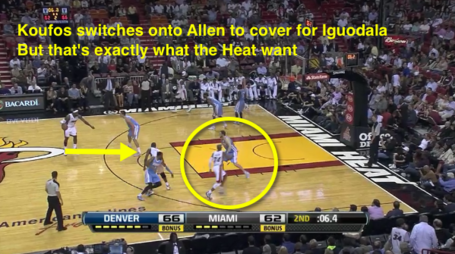 That perfectly sets up the pick and roll between James and Bosh, the play Miami actually wanted to run all along. 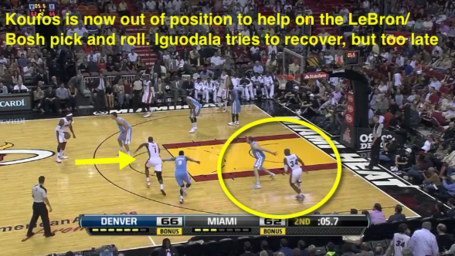 Iguodala tries to race back to Bosh to cover the pick and roll, but without Koufos to help on the backline, Denver's coverage falls apart. All James must do is deliver a pocket bounce pass to Bosh rolling to the rim for the dunk. 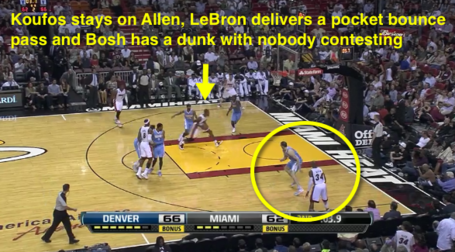 And that is how Allen is used as a decoy on a play that is normally run for him.

VARIATIONS: There are usually three outcomes: an Allen shot, a basket for the big man rolling to the rim or a score for the ball-handler. Some versions of this play have Allen starting at the elbow with another guard running through initially. The Heat have also evolved to the point where many different players can occupy the Allen role.

CAN IT BE DUPLICATED? Unless you can find a shooter with Allen's reputation, no.

HOW CAN IT BE DEFENDED? The Nuggets had the right idea in elements of this clip. Switching the initial Allen/James pick is what I'd do if I were coaching them, for example. But it's better for the man in Iguodala's spot to fight over Bosh's flare screen so the big man isn't forced to drift too far away from the rim. I would also switch any pick and roll between the ball-handler and the big man if it ever gets to that point.

COUNTERS TO THAT DEFENSE: Worse-case scenario, you have James or Wade isolated on a big man. That's an advantage for Miami.