Ersan Ilyasova is one of the NBA's most well-known "Stretch 4s," and he takes advantage of his shooting skill to sneak away from defenders rotating to cover a classic Bucks high pick-and-roll.

Ersan Ilyasova is one of the NBA's most well-known perimeter-shooting power forwards. After a slow start, Ilyasova is doing his thing again, hitting 44 percent of his 3-pointers after going over 45 percent last season.

But it's one thing to be able to shoot. It's another thing entirely to get open when the defense knows you're a 44-percent three-point shooter. How does Ilyasova do it? By making well-timed cuts in high pick and roll situations.

The Bucks have two ball-dominant guards in Brandon Jennings and Monta Ellis, so their offense relies on a steadier diet of high pick and rolls than most teams. The emergence of third-year big man Larry Sanders as a roll man in these situations only makes Milwaukee trickier to stop. Jennings and Ellis will hog the ball at times, but they are both good at hitting Sanders rolling to the rim.

But Ilyasova's shooting is a huge asset, too. The Bucks take advantage of this by inverting the floor and having Sanders (or another big man) and Ilyasova make simultaneous cuts to confuse the defense. As Sanders comes up high to set a ball screen, Ilyasova lurks in the paint. Once Sanders rolls, Ilyasova cuts to the top of the key. The confused defense isn't sure which one to guard, which inevitably leaves one open. Protect too much against the rolling Sanders, and Ilyasova has an open three. Help too much on Ilyasova, and Sanders gets a dunk. The video shows examples of both plays.

I call this the "Pick and Split," because the two big men are going in opposite directions. This is the Bucks' pet play.

ORIGINS: I'm not sure where this came from. The Magic used to use Dwight Howard and either Rashard Lewis and Ryan Anderson on simultaneous cuts, but I don't think I've seen anything like this before. Both Lewis and Anderson were better shooters from the wings and corners.

BREAKDOWN: We're going to show an example from a mid-March game against the Miami Heat, Milwaukee's first-round opponent. It comes at the 21-second mark of the video in a late-quarter situation.

Brandon Jennings holds the ball up top, winding the clock down. Eventually, Ekpe Udoh, playing the Sanders role on this play, comes up to set a screen. Note how Ilyasova is still down on the opposite block. 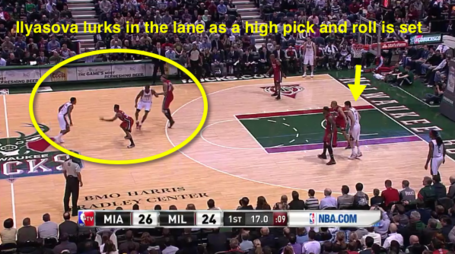 As the play rolls forward, Ilyasova will start to drive to the top of the key. The Heat trap the pick and roll up top, which means Ilyasova's man, Shane Battier, must rotate to cut off the roll to the rim. This is exactly what Milwaukee wants. 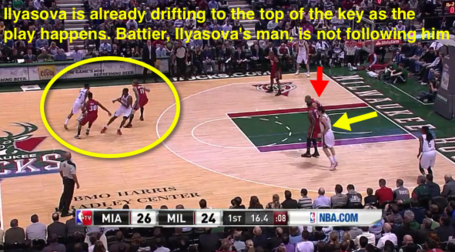 Jennings is in a tricky position, but he navigates it well. Meanwhile, Udoh rolls down the lane, drawing Battier even further away from Ilyasova. In addition, Marquis Daniels cuts backdoor in the corner, occupying LeBron James. As all this happens, Ilyasova keeps drifting away from the defense. 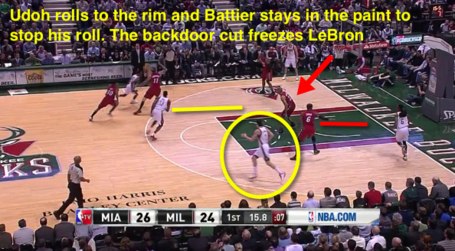 Udoh's roll to the rim essentially occupies as another screen. Ilyasova completes his cut to the top of the key, and Battier's nowhere near him. Jennings just needs to deliver the pass on target. 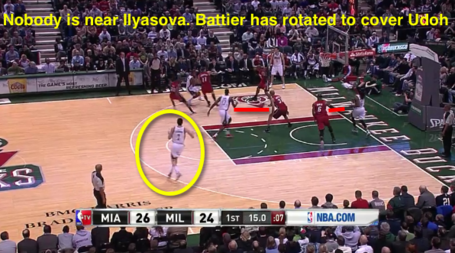 Jennings does, and Ilyasova gets the widest of wide-open looks. 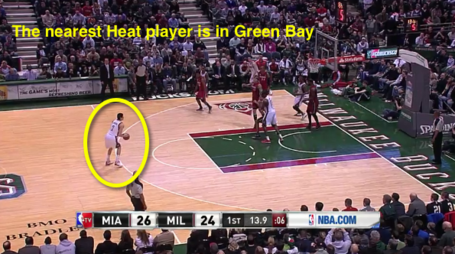 FREQUENCY: A couple times a game. Given Miami's strategy to trap the ball-handler in pick and roll situations, I'd expect to see this set a lot in the first-round series.

VARIATIONS: Ilyasova will sometimes start on the perimeter and just stay there rather than cutting up from the lane. The Bucks also run this action on some side pick-and-rolls.

CAN IT BE DUPLICATED? Yes, but it requires an elite shooter at power forward and a center that can be a major threat rolling to the rim.

HOW CAN IT BE DEFENDED? The answer is simple, but tricky to execute. Ilyasova's man must "chuck" the roller -- this is NBA-speak for bumping him off his path legally -- and rotate quickly back to Ilyasova. But mistiming the "chuck" is what allows Sanders or another Bucks big man to get a dunk at the rim. You'll see several examples of the big man finishing because Ilyasova's man doesn't "chuck" him properly.

COUNTERS TO THAT DEFENSE: The only good way is to reset and try a high pick and pop with Ilyasova screening. It's not ideal, but Ilyasova is at least a threat in classic pick-and-pop situations as well.