Jeff Green reflects on a year of personal triumph

A year ago, Jeff Green was recovering from heart surgery. This season he didn't miss a game and he's about to be back in the playoffs.

Share All sharing options for: Jeff Green reflects on a year of personal triumph

TORONTO -- Jeff Green suited up in every game for the Boston Celtics this season. Last year, he didn't play a single minute, recovering from heart surgery. The Celtics discovered an aortic aneurysm in a routine physical before the season started. It was life-threatening. After surgery he was told it would be two years before he'd completely recover.

"Oh, man, I'm truly blessed," Green said after the Celtics' final game of the regular season at the Air Canada Centre. "I mean, coming from heart surgery one year ago to come back and play every game and play the way I did. I got better as the year went along, that was all I wanted. I'm just blessed to be able to say that I played the whole season after having heart surgery and I just want to continue to get better."

"It's amazing," Boston guard Avery Bradley said. "Jeff, personally, we're all a family but he's like a brother to me. And to see everything that he's been through and be able to overcome everything and to have the season that he's had this year is just amazing."

Last season Bradley needed surgery on both shoulders during the Celtics' second-round series and couldn't contribute to the latter half of their playoff run. He and Green texted one another watching the games, wishing they could be out there.

"It was tough because you want to play the game, you want to be out there trying to help your teammates," Green said. "I think this year we have a little chip on our shoulders because now we have the opportunity to do what we couldn't do last year, so we're just going to go out there and play hard and try to give it our all."

It took Green some time to get comfortable and consistent with the Celtics, but he's been playing the best basketball of his career over the second half of the season. In the last 39 games, he averaged 16.5 points and 4.7 rebounds per contest, shooting 49.7 percent from the field and 43.1 percent from the three-point line. 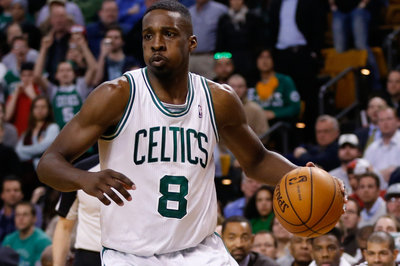 How the Celtics are including Green in one of their most-used set plays.

His 43-point outburst against the Miami Heat in mid-March sticks out, but what's more significant for the Celtics is that it's not surprising when he puts up big numbers anymore. Green closed out March with a pair of efficient 27-point games, went for 34 three days into April and hit the Heat with another 25 last Friday.

When Boston lost Rajon Rondo, Leandro Barbosa and Jared Sullinger for the season and then dealt with injuries to Kevin Garnett and Chris Wilcox, it created more opportunities for Green. As he's been more counted on, he's been more confident.

"I'm happy for him," Bradley said. "And I hope he wins like Most Improved or something ‘cause that's just amazing to go through what he's been through and then play the way that he's been playing. It shows that he has a strong heart and at the same time he's a good guy and he's a great player."

Green's last playoff appearance was in 2011, just months removed from the controversial trade that brought him to Boston and sent fan favorite Kendrick Perkins to the Oklahoma City Thunder. He averaged 7.3 points per game on 43.4 percent shooting over nine games against the New York Knicks and the Heat, averaging 19.2 minutes as he tried to figure out his place in the offense off of the bench. When he steps on the Madison Square Garden floor as the postseason begins on Saturday, it will be in an increased role.

"I'm pretty sure it's very special for him," Bradley said. "I'm happy that he's playing. I'm happy that we're both playing, ‘cause we both were going through the same thing not being able to play, be there for our teammates. So we're excited. I'm excited, this is my second playoff experience so I can't wait. And I know he can't, I know he can't wait. The atmosphere is like no other."

"I'm just happy to be at this point," Green said. "To be able to say I finished the season strong and healthy and we're going to the playoffs."