The Oklahoma City Thunder's pet play isn't complicated, but when you have Russell Westbrook and Kevin Durant, it can still be very effective.

It's no secret that the Oklahoma City Thunder don't run the most complicated offense in the world. Go on social media during every Thunder fourth quarter and you'll hear complaints about Scott Brooks' supposed inability to design a good set for his two star players, Russell Westbrook and Kevin Durant.

Yes, it's true: the Thunder's offense could use a little more imagination. And yes, it's possible that could be their undoing as they advance in the playoffs. But the flip side of the coin is that simple is often best, especially when you have such tremendous offensive talents in Westbrook and Durant. Boxing them too much into one system threatens to stifle their creativity.

Brooks keeps searching for that elusive middle ground, and he may have found it with Oklahoma City's pet play. The trick is to figure out how to unleash Westbrook and Durant together on the same play, much like the Miami Heat ran pick and rolls with Dwyane Wade and LeBron James last year. Westbrook and Durant are not natural pick-and-rollers, so the progress has been slow, but Brooks may have finally stumbled onto something.

The pet play? A pick and roll that begins with Durant receiving a down screen to free him up. It looks like a classic pindown play, but Durant ultimately continues to screen off Westbrook's man. The defense is already behind Durant, making it difficult to defend the play with Westbrook. Easy shots for Durant or Westbrook usually result.

ORIGINS: This is basically a compound play involving two of the simplest actions in basketball: the pick and roll and the curl screen.

BREAKDOWN: We're going to look at a late-December game against the Mavericks. TNT showed this play from the reverse angle, which allows us to see what the players are seeing. It's at the 3:22 mark of the video.

The play begins with Serge Ibaka at the elbow and Durant on the baseline. Ibaka is going to come and screen for Durant. 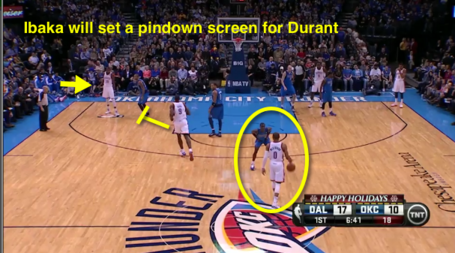 The screen itself isn't the best in the world, but it works. At least Durant frees himself well enough from Dahntay Jones to come to the ball. 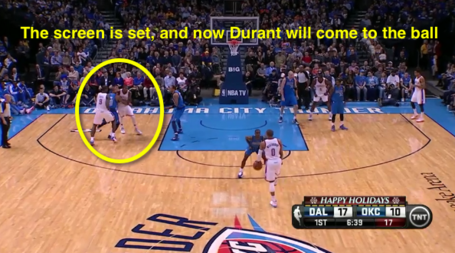 Jones elects to do what many teams do when defending this play: come out and try to divert Westbrook's path enough to throw off the timing of the play. In the end, though, that's what Oklahoma City wants. Few small forwards can contain Westbrook on a half-hearted trap. All Durant does is screen Westbrook's man, Darren Collison, and roll to the rim. 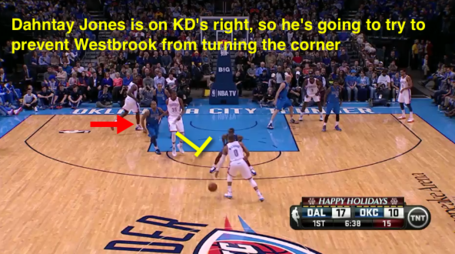 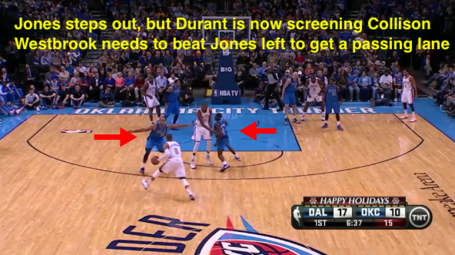 Look at Jones' position there. He's upright, his arms are way out and he can't really slide over to stay with Westbrook. Beating Jones going left is not hard for a player of Westbrook's caliber. By the time he does that, Collison is trying to rotate back, leaving a lane for Durant one step from the rim. 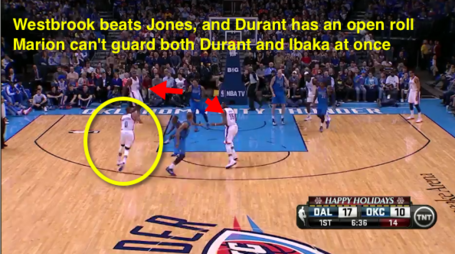 Shawn Marion is patrolling the backline, but he can't rotate to Durant fast enough. Even if he does, Durant can just drop it off to Ibaka for a dunk. In the end, it's Durant that finishes. 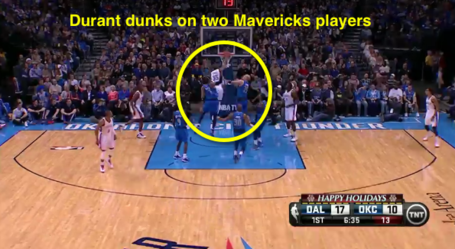 FREQUENCY: Not as frequently as you'd expect during the season, but I think that changes in the playoffs. This is a simple go-to crunch-time set.

VARIATIONS: Occasionally, Durant will come off a double-screen rather than a single pindown. He'll also flare out to open space rather than rolling to the rim.

CAN IT BE DUPLICATED? Anyone with a good point guard and an athletic wing can do this. It just won't be as effective because they won't be Russell Westbrook and Kevin Durant.

HOW CAN IT BE DEFENDED? I think switching is the way to go. The Thunder have a tendency to pound the dribble when they get a mismatch, ruining their flow. You have to live with that if you're the defense. Easier said than done, though.

COUNTERS TO THAT DEFENSE: Besides going one-on-one, there's always the option to run it again if the defense switches. Point guards aren't used to defending the roll man in these scenarios.

NBA Playoffs 2013, Thunder vs. Rockets: Oklahoma City closes it out in Game 6