The San Antonio Spurs' motion offense is a thing of beauty, but one particular play out of the Motion Weak alignment is particularly devastating to defenses.

The San Antonio Spurs' offense -- you know, the one that makes basketball purists gush -- really isn't as complicated as it looks. San Antonio has three standard Motion alignments, and from there, everything else flows.

In Motion Strong, the point guard brings the ball up one wing, swings to the big man and then to the other guard on the opposite site. That ultimately initiates a number of plays, including a pindown for the small forward and other staggered screen actions.

In Motion Loop (or just "The Loop"), the point guard dribbles toward one of the two wings. That wing player then curls down the lane and back up to the top of the key to initiate the rest of the action. Floppy and single-double screens are common out of this alignment.

Finally, in Motion Weak, the ball-handler pitches it ahead to one of the wings and begins curling towards the opposite site. The wing throws it back to the big man at the top of the key, who swings it back to the point guard to initiate the rest of the action. This is one way the Spurs get early post-ups for Tim Duncan.

Those three alignments are where almost all of San Antonio's set offense comes from. I'm going to focus on my favorite of all of these: the Motion Weak side pick and roll. This is San Antonio's pet play.

ORIGINS: The motion offense has been around forever, but this particular action really rose as Tony Parker became a star. It's the perfect set to take advantage of his quickness.

BREAKDOWN: I want to look at a play from early January against the Bucks because it shows just how easy it is to go into your secondary options with Motion Weak. The set begins at the 3:41 mark of the video. Note the timing of each part of the play.

The Bucks have just scored, and yet, San Antonio is getting the ball up the floor quickly. Note the time on the shot block as the now-departed Stephen Jackson controls the ball on the left wing. 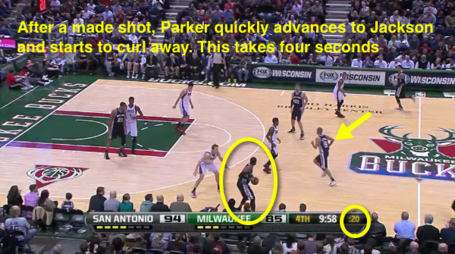 The Spurs only need four seconds to get into their play.

Jackson eventually swings it to Tiago Splitter, who prepares to give it back to Parker. As Splitter holds it, Parker and Danny Green criss-cross while curling to opposite spots on the floor. 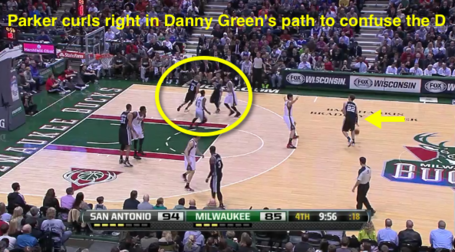 While Parker is going to the ball, Green is going to the opposite block to set a cross-screen for Tim Duncan. This is why I noted before that Motion Weak is a great alignment to get Duncan a look in the paint. 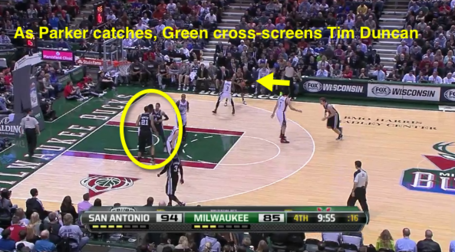 But in this case, Duncan is coming to set a screen for Parker. The value of Green's pick is that it puts Duncan's man, Larry Sanders, in a tough position to contest that side pick and roll. We'll get back to this in a second.

As this is all happening, Green comes off a Tiago Splitter screen and curls up to the top of the key. Duncan, ever-so-crafty, adds yet another element to this play when he lightly taps Splitter's man while coming over to set the pick on Parker. The end result is a crowded middle where two actions are happening at once. 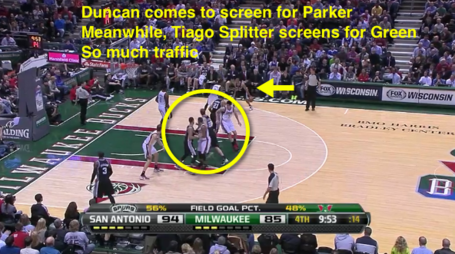 All that traffic confuses Milwaukee's players. Let's get back to Sanders. He's removed himself from the fray in the middle because of Green's cross-screen, so he's on the wrong side of Parker for this pick and roll. Duncan screens for Parker to go middle, and Sanders is nowhere to be found. 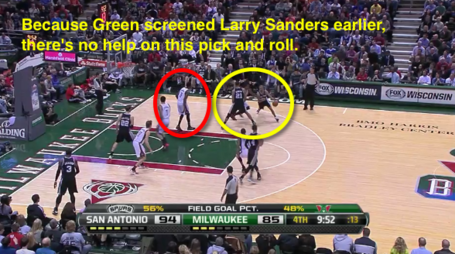 And that causes Monta Ellis to panic. Ellis, currently guarding Green, exhibits what I call "defensive hero ball" by gambling off Green in a furious attempt to prevent Parker from penetrating. All that does is leave Green wide open from beyond the arc. 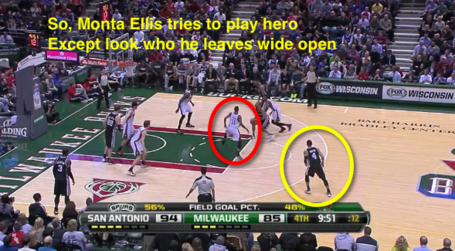 This is an easy shot for one of the league's best three-point shooters. Better yet, the floor is spaced so beautifully that Green has an easy swing pass to the corner if Mike Dunleavy runs out on him. 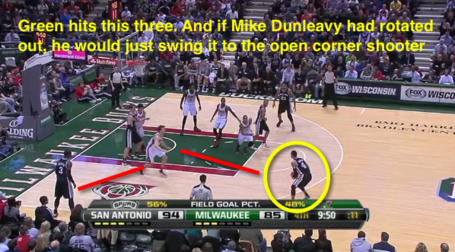 That is how the Spurs burn you with the Motion Weak side pick and roll.

FREQUENCY: Surprisingly rare given its success. It used to be run multiple times a game, but recently, San Antonio has gone full games without running this set at all. I don't know why San Antonio has run less of its motion over the past few weeks. Maybe that's why they're struggling.

VARIATIONS: Not every version of this play has all the elements. The cross-screen, for example, doesn't happen all the time. And, of course, this same alignment can be used to get Duncan a post-up or Green (or another wing) an open shot at the top of the key.

CAN IT BE DUPLICATED? It's difficult, but any team with a fast point guard and good big men should work now to drill their players to run this set. (Are you listening, Wizards? This would be perfect for you with John Wall in Parker's role, Bradley Beal acting as Green, Martell Webster as Jackson and the two bigs (Nene and Emeka Okafor) playing Splitter and Duncan's roles).

HOW CAN IT BE DEFENDED? The Motion Weak side pick and roll, and really any Motion Weak set in general, is a timing play. If you allow the Spurs to run through every part of the sequence unimpeded, they'll pick you apart, but if you can find a way to overplay a pass or bump a cutter effectively, you can throw the entire thing off. The Thunder did a nice job of that in last year's playoffs.

COUNTERS TO THAT DEFENSE: Spurs wings are taught to immediately cut backdoor when being overplayed, so you do have to be careful.