George Karl's decision to play Wilson Chandler at power forward has allowed the Nuggets to surge to new heights. Here is the simple, yet effective play that best takes advantage of Chandler's speed.

Wilson Chandler returned from injury in January to discover a crowded Denver Nuggets rotation that already didn't have room for several productive players. Andre Iguodala. Danilo Gallinari. Corey Brewer, Andre Miller and Ty Lawson together rather than a traditional wing player. Kenneth Faried holding the fort down at power forward. JaVale McGee and Kosta Koufos being experimented in lineups together. Where was Chandler going to fit into that rotation?

George Karl had to figure something out, and figure something out he did. In a nod to the Nuggets' high-octane style, Karl decided to play Chandler -- who entered the league as a shooting guard -- as a power forward. Would Chandler be giving up a lot of size? Sure. But Chandler is also fast, has a tricky one-on-one game, a sweet mid-range stroke and can shoot from deep when need be. Who better to use to dictate the terms of engagement within a game?

The Nuggets have taken off since Karl's decision. Denver is 27-8 when Chandler plays at least 20 minutes in a game, and this pet play explains why. Rather than using Chandler in pick and rolls or even traditional pick and pops, Karl has designed sets for Chandler to literally sprint through a screen going away from the basket. The idea is for Chandler to catch and space and make a quick decision against a power forward that probably can't keep up with him off the dribble anyway. It's a nightmare scenario for the David Lees of the world.

The "pick and fade" is Denver's pet play. It's a pretty simple play, but devastatingly effective. And with Danilo Gallinari, Denver's normal crunch-time finisher, sidelined with a torn ACL, you can expect to see this pet play in tight games throughout the postseason.

ORIGINS: This is basically a pick and pop on steroids.

BREAKDOWN: We're going to look at an April game against San Antonio after Gallinari tore his ACL. It's the first play you see in the video.

This is an end-of-quarter situation, so the Nuggets have spread the floor. Three players are on the baseline, including JaVale McGee, who is out of bounds. This is something the Nuggets do often and is explained in an earlier version of Prada's Pictures. 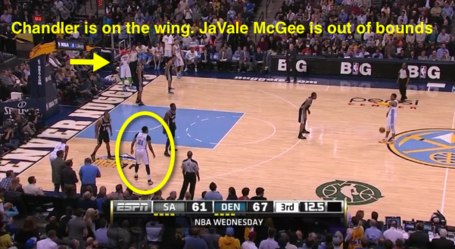 Andre Iguodala has the ball at the top of the key. He's going to run the clock down, and then Chandler is going to sprint to seemingly set a pick. 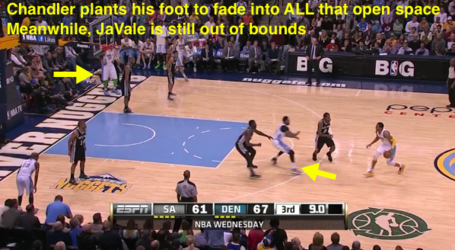 This is already a problem for the Spurs. DeJuan Blair is way too slow to guard Chandler and is already trailing the play. Chandler pauses here for a split second, then plants off the back foot to avoid crashing into Kawhi Leonard, guarding Iguodala. Blair compounds his lack of foot speed by inching towards Iguodala, and now he's toast. 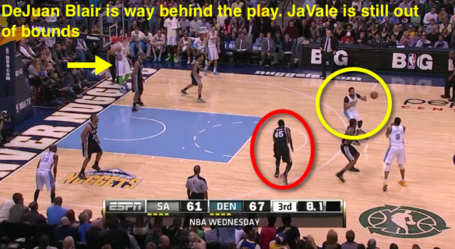 This is particularly egregious defense, but even if Blair was in slightly better position, the Nuggets are in good shape. Chandler is really good at changing direction off the dribble, so having him attack a closing-out power forward is advantageous for Denver. The presence of everyone on the baseline, including McGee out of bounds, is also vital because it pulls the help defenders back. Tim Duncan has more room to travel before he can step up and contest Chandler's drive.

The Spurs try to plug the lane by having Cory Joseph stunt towards Chandler, but it doesn't work. Joseph can't go any further because he'd leave his man wide open for a corner three, and Chandler rolls down the lane for the slam. 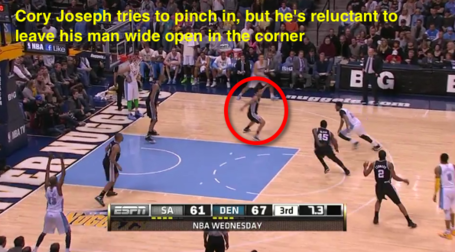 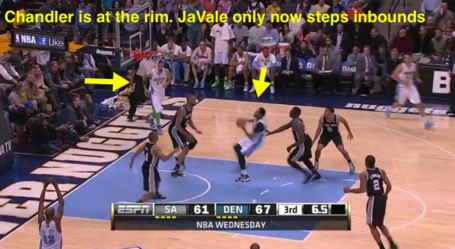 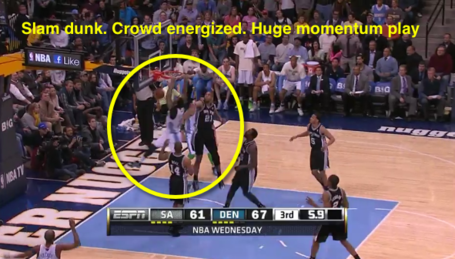 VARIATIONS: Chandler will sometimes sprint from the opposite wing, but he'll also sometimes come up from the elbow into a fade that more closely resembles a traditional pick and pop.

CAN IT BE DUPLICATED? As long as you're willing to play a guy like Chandler at power forward, yes.

HOW CAN IT BE DEFENDED? The defender has to assume that Chandler won't be setting the screen. Treat it like a cut across the top of the key and just follow him instead of trying to stop a hypothetical pick and roll that's not going to happen.

COUNTERS TO THAT DEFENSE: Iguodala, Lawson or any other ball-handler can drive to the basket himself if he sees the defense momentarily confused.