The Golden State Warriors have two of the league's best shooters in Stephen Curry and Klay Thompson. Here's a particularly creative way they get them open for threes.

The Golden State Warriors have the NBA's best shooter in Stephen Curry. After the season he put together, this is really not up for debate. They also have Klay Thompson, who is no slouch himself and would be the best shooter on many teams if he improved his shot selection a bit.

Getting those players a sliver of daylight to rise and fire is Mark Jackson's main priority on offense. Because both players are threats from anywhere, the Warriors' coach has a major luxury. He's turned both loose in so many fun ways, unleashing elaborate screen mazes that haven't been duplicated since ... well, ever? I could have picked about five pet plays just from all the screening action.

In the end, I chose "elevator doors" because it's the one the Warriors have used more often to close the season. "Elevator doors" made the rounds a few weeks ago, and it's brilliant because it's a variation of a much simpler down screen. Rather than run his man into a single pick at the elbow, the shooter, either Curry or Thompson, veers up the lane between two screeners. After he gets through the gap, the two screeners come together, trapping the shooter's man as if the door to the elevator is closing.

It's one of my favorite NBA plays, and it fits the Warriors perfectly.

ORIGINS: I'm sure something like this has been done before, but I can't remember it.

BREAKDOWN: This play comes from a game in late-February against the Pacers. It's at the 1:03 mark of this video.

The Warriors begin in a classic HORNS alignment, with the point guard up top, two big men at the elbows and two shooters in the corners. Jarrett Jack, playing point in this set, enters the ball to David Lee, then goes to Curry's side of the floor to set a quick screen. 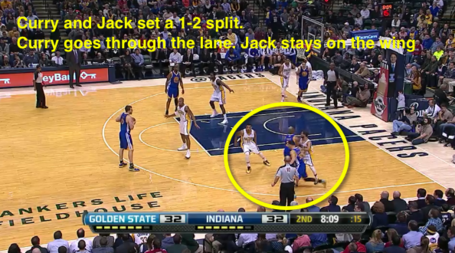 This split gives Curry a head start as he goes into the lane. The Pacers actually play this pretty well, switching D.J. Augustin and Orlando Johnson, but the action nevertheless serves it's purpose. Jack floats to the wing to catch the pass from Lee, and Curry is off and running.

The set normally calls for Curry to come off Carl Landry's left to the opposite wing. But Curry notices that Ian Mahinmi, guarding Landry, is overplaying him, trying to prevent him from getting a clean path. 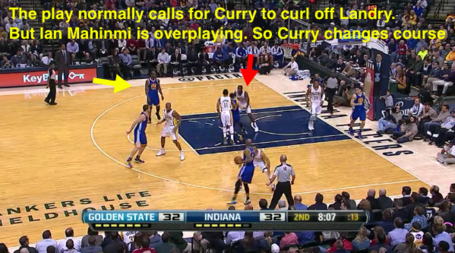 Selling the initial move is key here, and that's why Curry is one of the best. In this screenshot, Johnson is overplaying him to go to the top of the key. But as we roll forward, Curry fakes his normal move, slows down, plants and sprints up the lane beautifully, creating separation. (This is the part where a TV talking head will tell you "kids at home" to watch Curry closely). 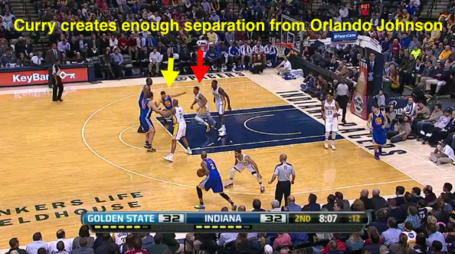 That separation is essential to the success of this play. If Curry cannot create it, the elevator doors will close incorrectly and it'll be an obvious offensive foul. But because that space exists, the Warriors are able to sneak Curry between Landry and Lee and then close the door on Johnson. 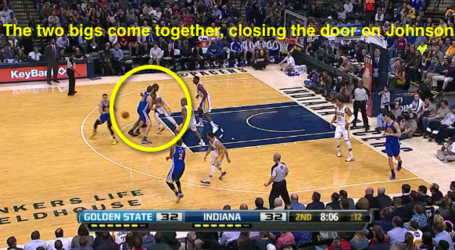 And that's how this happens. 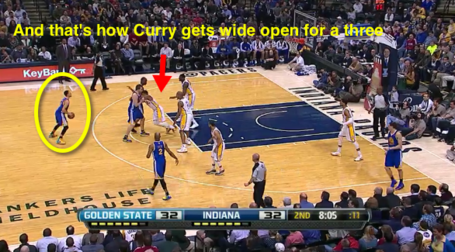 FREQUENCY: Infrequently by design. The Warriors can't run this play too often because so much of its success depends on the element of surprise.

VARIATIONS: Golden State has a version of this where the elevator doors are actually set on the baseline to free Curry or Thompson for a corner three. You normally see that in sideline out of bounds situations.

CAN IT BE DUPLICATED? Only if you have players as good at coming off screens as Curry and Thompson. If the guard doesn't sell the traditional curl, the play doesn't work.

HOW CAN IT BE DEFENDED? The only way is to stay connected to the shooter. If you can beat the doors closing, you can beat the play. You can also cheat over the pick one way and have a big man step out to contest the shot until the guard recovers.

COUNTERS TO THAT DEFENSE: This is the one issue with "Elevator Doors." Since it is by definition a counter to another play, it's hard to ad-lib if the doors don't close in time.