James Harden's ability to throw skip passes allows the Rockets to beat overloading defense even on isolation plays. Here is how the Rockets take advantage of Harden's passing.

The Houston Rockets, by their own admission, run a simple offense. They spread the floor with shooters, push the ball relentlessly, use Omer Asik's ability to screen and roll and let James Harden make plays. At some point, they'll need to add more plays to their arsenal, but for now, simple works. (That is, unless it's in the final few minutes of a close game, like we saw Wednesday against the Lakers).

Such a simple offense is normally prone to the overloading strong-side defenses we see in the NBA. But the Rockets do have an ace in the hole to counter that coverage: Harden himself.

The entire premise of an overloading strong-side defense is that giving up the skip pass crosscourt is a sacrifice worth making to contain the ball. This is because there are very few players who can throw that pass accurately. But as it turns out, the Rockets have one such player in Harden. His ability to see over the defense allows Houston to set flare screens for shooters to fade into the corner, thereby beating the strong-side zone.

This is the Rockets' pet play.

ORIGINS: The flare screen is something you learn as a kid, and isolation-heavy teams of the past have used it to give defenders something more to think about.

BREAKDOWN: This comes from a critical late-game possession in a mid-March game against the Timberwolves. You can see it at the 25-second mark of the video.

The play begins with Jeremy Lin dribbling to the wing as Harden curls up from the baseline. Lin is going to give Harden the ball at the top of the key and space out. 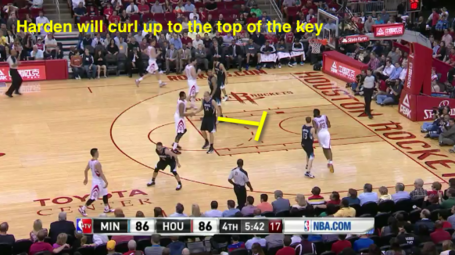 The Timberwolves muck up this screen nicely, slowing Harden's path, but he still manages to come to the ball. 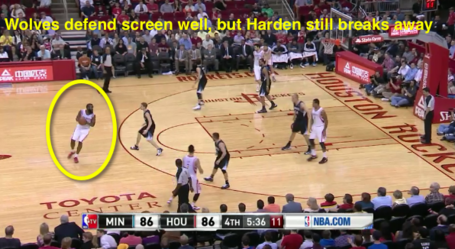 At this point, Harden holds the ball at the top of the key. Because nobody is moving, all five Timberwolves players lock in on him. 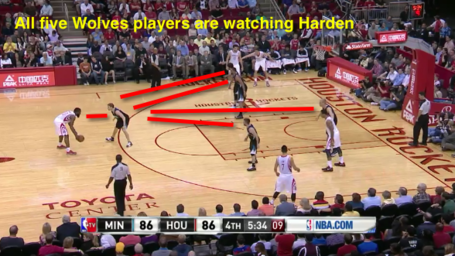 This is exactly what the Rockets want, because it allows Greg Smith to sneak in a flare screen on J.J. Barea to free Lin in the corner. It works beautifully because of how it's timed. Harden doesn't wait for Smith to set the screen; he throws the pass before Smith begins his motion. Smith will eventually set himself while the pass is in the air, flattening Barea and opening the shot up. 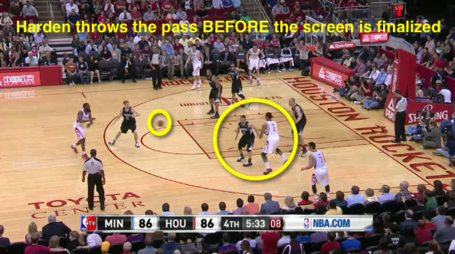 FREQUENCY: Probably once a game as a change-of-pace to the normal 1-4 flat sets.

VARIATIONS: That down screen to free Harden doesn't always happen. Houston will also invert the play by starting Harden on one side and having him lob a pass to the other.

CAN IT BE DUPLICATED? Yeah, anyone can do it.

HOW CAN IT BE DEFENDED? It's all about anticipating it before it happens. The flare screen works because you don't expect it. If you keep in mind that the Rockets like to do it, you can avoid being flattened by the screener.

COUNTERS TO THAT DEFENSE: Letting Harden go to work.

NBA Playoffs 2013, Thunder vs. Rockets: Oklahoma City closes it out in Game 6