Without Kobe Bryant, the Lakers will need to run more set offense than they did for most of the year. This backscreen play for Dwight Howard is an example of what's possible when that happens.

The Los Angeles Lakers' offense has been in flux all season. This is not a surprise, given the coaching instability, the roster changes and all the injuries. It's usually featured Kobe Bryant doing whatever he wants and everyone else trying to follow along.

But with Bryant now out for the entire postseason, the game changes for L.A. It's time to rely more on Pau Gasol and Dwight Howard, and it's time to show off a few of the set plays that have been run too infrequently all year.

Recently, the Lakers have experienced success using HORNS, a common alignment that places Gasol and Howard in the high post with shooters in the corners. The point guard often dumps the ball into Gasol at one elbow and flows from there. (Why it took so long for Mike D'Antoni to figure this out, I'll never know). L.A. has a number of set plays that work beautifully from this alignment, so it's tough for the defense to focus on one.

We're going to discuss my favorite of the bunch: the backdoor lob for Dwight Howard.

ORIGINS: HORNS is a common alignment that has become more popular around the league in recent years. The backdoor lob has also been around for a while and is used by teams with athletic big men.

BREAKDOWN: This play is from a mid-March game against the Pacers. It begins at the 32-second mark of the video.

As the play begins, Steve Nash enters the ball to Metta World Peace at one elbow. In this set, World Peace is playing the role Gasol will play in the postseason. 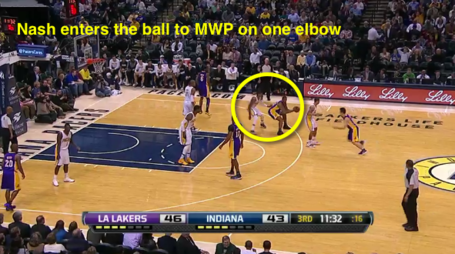 Nash will then curl around World Peace and set a screen for Jodie Meeks in the lane. This looks like the primary play, but it's actually a decoy that functions as a way to clear Meeks' defender away from where the Lakers want to throw the lob. 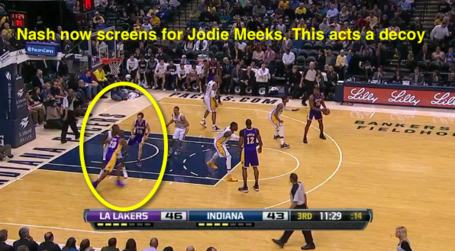 From here, Nash will set a backscreen on Dwight Howard's man. In this case, the pick works especially well because George Hill, Nash's man, is overplaying Nash to come back up to the top of the key. Nash therefore screens out two people at once, preventing Hill from disrupting the lob. 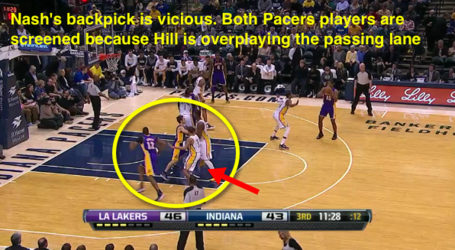 That's why Howard is wide open. 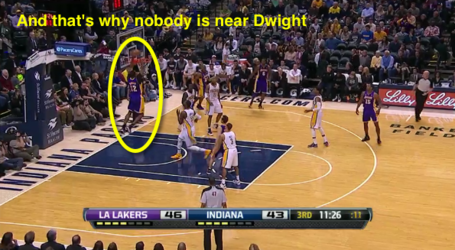 FREQUENCY: Not very often, because that would ruin the element of surprise.

VARIATIONS: The Lakers have a sideline out of bounds version of this play that you see a couple times in the video. They also disguise it well by having Nash pop out to the wing or come up for a dribble handoff instead of setting the backscreen.

CAN IT BE DUPLICATED? It's very tough because few teams have a big man that can pass like Gasol and an athletic freak like Howard.

HOW CAN IT BE DEFENDED? The point guard needs to bump Howard as he cuts. Doing that allows Howard's man to fight through the backpick and recover.

COUNTERS TO THAT DEFENSE: The longer the point guard bumps the big man, the easier it is for Nash, Steve Blake or whoever else to curl up to the top of the key. With such a head start, this opens up three-point opportunities or other actions.