Deron Williams was firmly in control in Game 1 of the Nets' playoff series against the Bulls. Here's a look at how he read the help defense beautifully and made plays for himself and others.

Deron Williams has been ballin' for a while now, so it's not a surprise that he was on top of his game in the Brooklyn Nets' 106-89 Game 1 victory over the Chicago Bulls Saturday. But I want to focus on one element of Williams' performance because it reveals a truism that's often forgotten by basketball fans.

As the game has become more sophisticated, so too have defenses. It's always been true that the back line has to be ready to help if someone gets beat off the dribble, but two things have happened to heighten the importance of help defenders.

All this is to say that the game returned to its purest form. As an old high school coach once told me, success is determined by which side of the ball is the actor, not the reactor. If the offense can exploit a hole in the entire defensive alignment before the defense notices, it will succeed. By contrast, if the defense forces the offense to the area of the floor it wants, it will triumph.

How does this relate to Deron Williams? In Game 1, he exploited holes in the Bulls' defense before they even noticed, and he did it not by reading his own man, but reading the man behind him.

Here's a play early in the first quarter. The Bulls have missed a shot and Williams is dribbling down the left wing. Kirk Hinrich, an excellent defender, is on Williams, but Williams isn't paying attention to him. Look at where his eyes are on this screenshot. 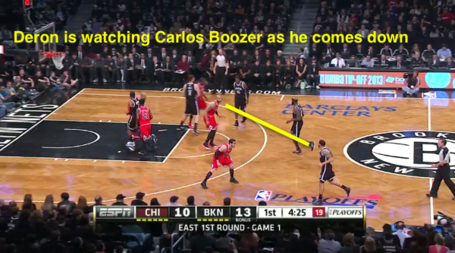 Williams is watching Boozer because he knows Boozer is Hinrich's primary help. It's Boozer, and not Hinrich, that would play the biggest role in thwarting a drive to the basket.

To test Boozer, the Nets run a double-screen curl for Gerald Wallace in transition, using Brook Lopez and Reggie Evans. As that's happening, Williams continues to watch Boozer. If Boozer reacts to the Nets' motion, Williams knows he has a chance to exploit a gap. And sure enough... 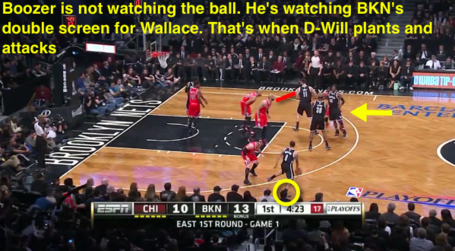 This is where Williams' health also comes in. Three months ago, his ankles would probably be in too much pain to make this quick move. Now, though, he doesn't even give second thought to the possibility that he can't beat Hinrich off the dribble. It's all about sneaking past Boozer if he turns his head.

As expected, Williams reads this right. A quick move gets by Hinrich, and Boozer slides over too late to contest the layup. 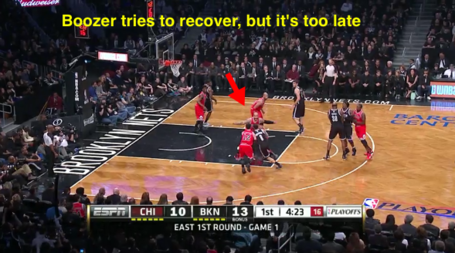 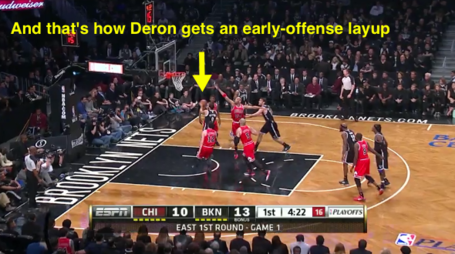 Here's another example of the same concept in the second quarter. Williams will dribble down the left side after a Bulls miss, and his first move is to lock eyes with Boozer to see what he's watching. 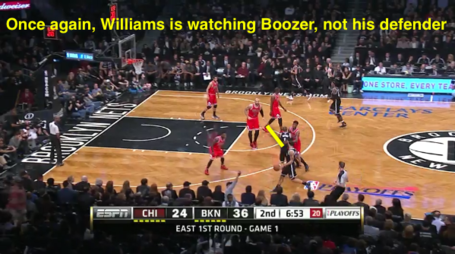 The Nets once again test Boozer by running some early offense. This time, they try what vaguely looks like a Pistol set, where the shooting guard will run from the corner up to the top of the key to force a switch. From there, the point guard either feeds the shooting guard or waits for a big man to come down to run a side pick and roll. (Mike D'Antoni ran these sets often with the Seven Seconds Or Less Suns).

But once again, Williams breaks off the play because he notices Boozer reacting to the action around him instead of keeping his eye exclusively on the ball. 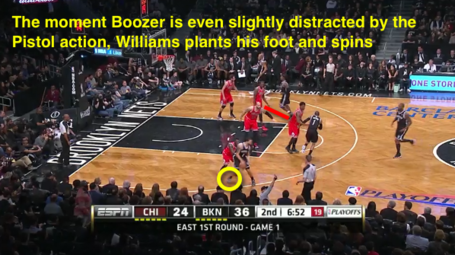 Once again, it's second-nature to Williams how his primary defender is playing him. No matter what, he's confident he can get by that guy. In this case, Williams plants his inside foot beautifully and spins away to the baseline, beating Nate Robinson and getting to the rim before Boozer can recover. 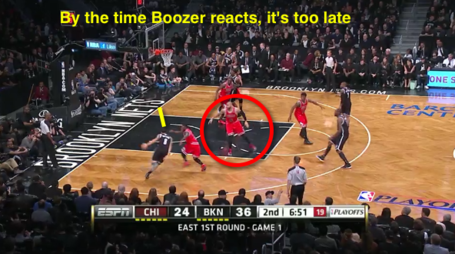 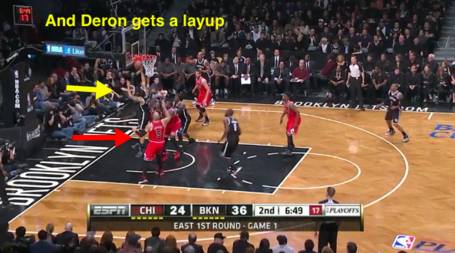 Finally, we'll see Williams pick on Boozer again, but this time, he'll do it with the pass. As we've seen in the previous two clips, Williams comes down one of the wings off a Bulls miss in an early-offense situation. This time, Williams advances up the right side of the floor. C.J. Watson once again cuts through, creating a switch. 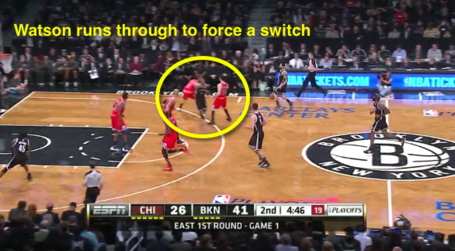 Marco Belinelli is now on Williams, but it really doesn't matter. As we've seen before, Williams' first instinct is to look at the defense behind Belinelli. In this case, Boozer and Nazr Mohammad are deep in the lane in an attempt to cut off Williams' early-offense driving. 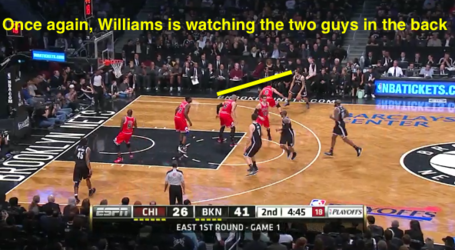 It's time for Brooklyn to throw in another diversion to see how those two help defenders react. Reggie Evans, the man at the very back of the previous screenshot, will cut down the lane. Watch how Boozer accounts for him as if he's the most dangerous cutter in NBA history. 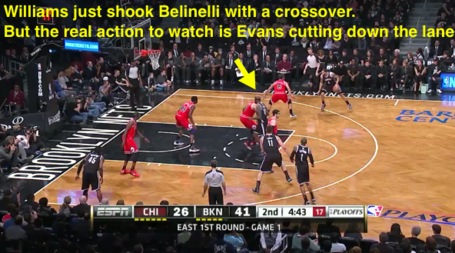 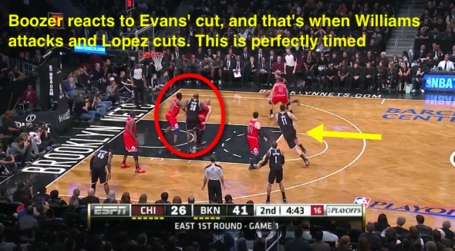 Once again, note the timing of Williams' move. He throws in a number of high dribbles and even crosses up Belinelli once, but he never has any intention of acting on those moves. All he's doing is offering a distraction until he sees how Boozer and Mohammad react to Evans' cut. Once he notices Boozer pick him up, Williams makes his move.

As Williams makes his move, Brook Lopez comes charging down the lane. Again: this is timed on purpose. Williams' decision to shoot or pass will be determined by how Mohammad reacts to his right-handed drive. And sure enough: 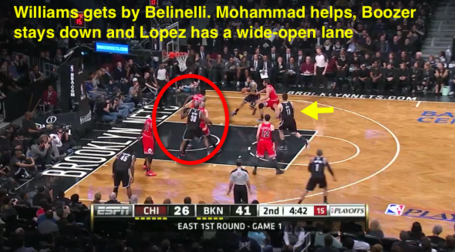 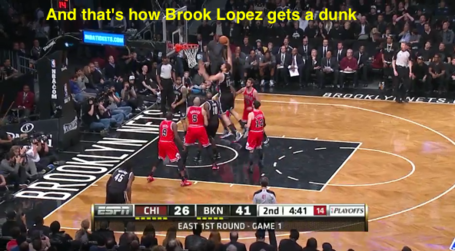 This is how Deron Williams picked the Bulls apart in secondary transition situations. Early in the year, his decision-making in these situations was uncharacteristically poor, given what we've seen from him throughout his career. But since undergoing plasma therapy on his ankles over the All-Star break, Williams' strength is his strength once again. It's a firm reminder that physical pain affects mental decision-making more than anything.

Now, it's on the Bulls to adjust. They can't overreact to all these decoy plays, because Williams is too good at attacking any gap before the defense is set.