While Stephen Curry and the Warriors deserve credit for dropping 131 points in a Game 2 victory over the Denver Nuggets, they were aided by some terrible defensive breakdowns.

Stephen Curry and the Golden State Warriors went off in Denver on Tuesday night. Curry dropped 30 points, Jarrett Jack had 26, Harrison Barnes had 24 and Klay Thompson had 21 in a 131-117 Game 2 victory over the Nuggets, the first by a visiting team in Denver since mid-January. It was a remarkable display of shooting and offensive execution.

It was also really bad defense by the Nuggets.

Denver's defensive strategy was a disaster, as they left shooters open everywhere. In Game 1, the Nuggets thrived by switching many of Golden State's screens and helping off Harrison Barnes and David Lee to plug dribble penetration. But with Lee out after his season-ending hip injury, the Warriors went to a small lineup, inserting Jarrett Jack into the starting five and sliding Barnes to power forward. That proved to be a masterful adjustment by Mark Jackson because it put more shooting on the floor, making it much more difficult for Denver to cheat off other players to plug the lane.

Even that, though, only explains some of Denver's defensive ineptitude. The Nuggets committed several fundamental breakdowns, on Curry in particular, that are unacceptable no matter the scheme. We're going to break down some of the plays you see in this video.

For one, the Nuggets' pick-and-roll defense was horrible. Everyone knows that Curry can shoot from anywhere on the floor, and yet the Nuggets consistently gave him too much room to rise and fire off basic high screens.

On this play, Kosta Koufos gets flattened by a simple screen-the-screener set from Golden State. The Warriors run Harrison Barnes into Koufos to slow him up and give Andrew Bogut space to set a pick for Curry. Notice how poorly Koufos deals with it. 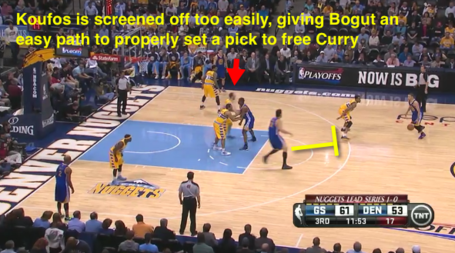 Sure enough, Koufos is in no position to help Andre Iguodala deal with the pick and roll. 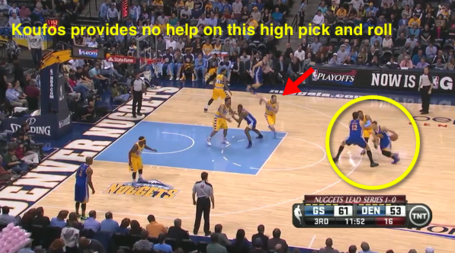 Because of that, Curry gets a wide-open shot that he predictably hits. 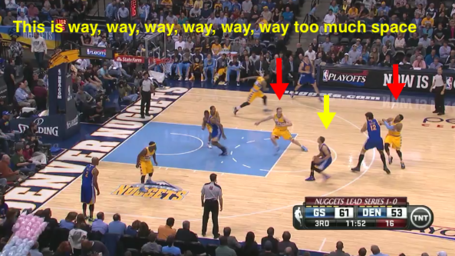 Koufos wasn't the only one to mess up this screen-the-screener coverage. Watch JaVale McGee make the same exact mistake a couple minutes later. 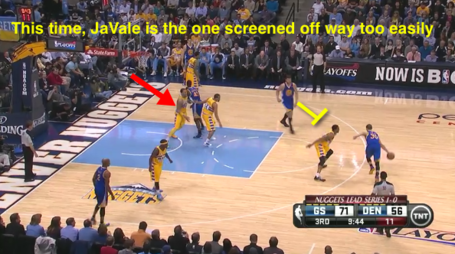 This time, Bogut is coming to Curry's right, and McGee is fighting over the screen down low by going to Curry's left. It's the same thing Koufos did, just on the opposite side. The same ultimate result occurs. 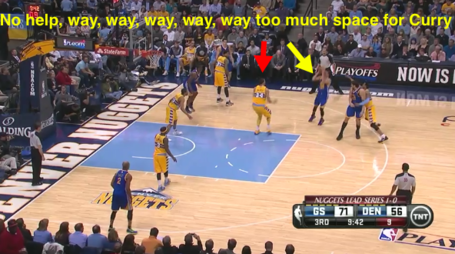 Denver's big men were slow even without being held off by a second Warriors screen. Notice how slowly Kenneth Faried reacts to this side pick and roll in the second quarter. 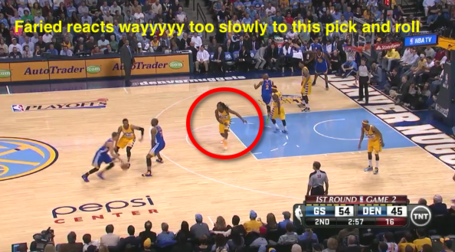 Faried's slow initial reaction ensures that Iguodala again has no help on Carl Landry's screen. Faried rushes to make up the gap, but in the process, he gets himself off-balanced, opening his stance and leaving himself vulnerable to a Curry crossover. 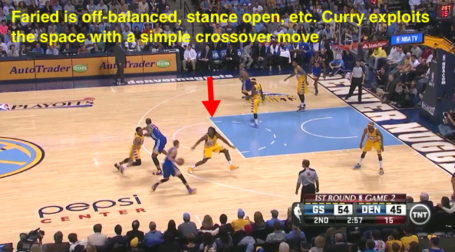 Sure enough, Curry makes his move, leaves Faried in the dust and creates room for an open jumper. 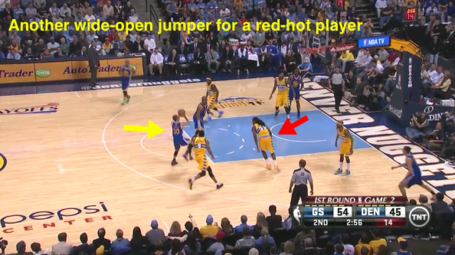 Many of Denver's problems were even more fundamental than this, though.

On this play, the Nuggets get caught with Faried guarding Curry on a switch. This isn't the worst thing in the world, but that's only if the Nuggets cheat off other players to shrink the floor and limit Curry's options. That's what Corey Brewer is supposed to be doing when he positions himself off Richard Jefferson and near Curry. 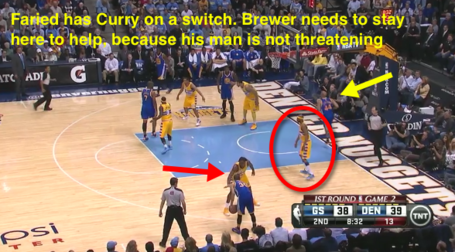 Jefferson is running harmlessly to the opposite corner, where there's already a lot of traffic. So, why does Brewer follow him and lose sight of the ball? 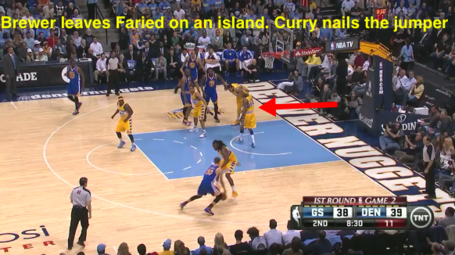 That gives Curry more space to work, and he uses the threat of the drive to cross up Faried and nail the jumper.

Here's another fundamental error by Denver. The Warriors try to milk the Harrison Barnes/Ty Lawson mismatch, but Lawson pushes Barnes far away from the hoop. Nevertheless, the Nuggets double-team Barnes, for some reason. 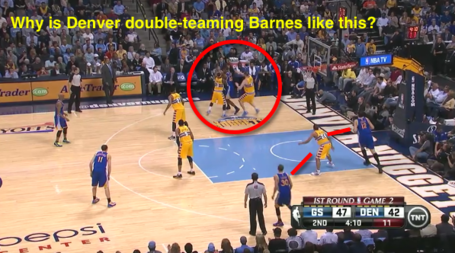 The Warriors react appropriately. Andrew Bogut cuts to the basket, forcing Andre Miller to leave Curry to stop a potential dunk. That, in turn, forces Iguodala into the impossible task of guarding both Curry and Klay Thompson beyond the arc. 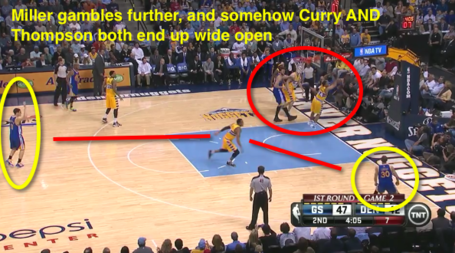 Barnes eventually beats the trap and finds Curry in the corner, and this is practically a layup for him. 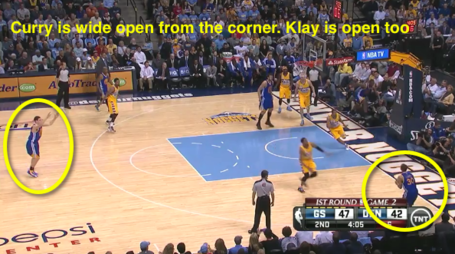 Finally, I'm really not sure how Lawson lost Curry in transition on this play, but that's obviously a major problem. 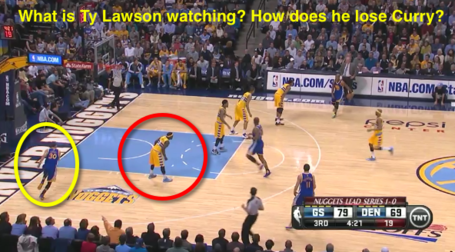 Curry sneaks along the baseline, and by the time Lawson recognizes what he's done, it's far too late. 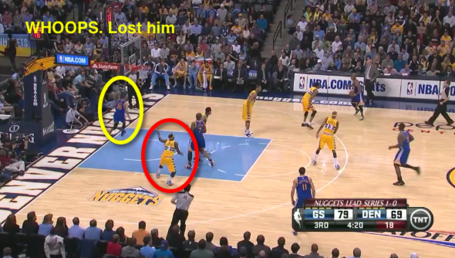 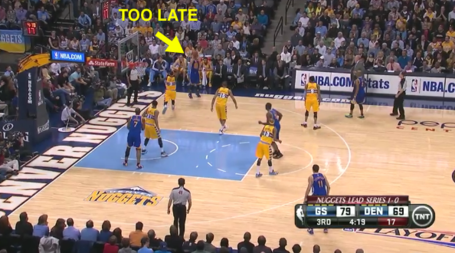 Why did all these breakdowns happen? There are a few theories one could throw out. With regard to strategy, the Warriors have rarely played small with Barnes at power forward, which makes it difficult to create a sound defensive gameplan in the short term. With regard to execution, perhaps the Nuggets, a young team in a high-pressure spot, got discouraged by Golden State's hot shooting early in the game and let it affect their play.

But the good news for Denver is that many of these fixes are simple. The Nuggets don't need to significantly change their approach to stop the Warriors at home and steal back control of the series. They just need to concentrate and avoid bad breakdowns like these.