The Giants haven't won any of the five games Matt Cain has started in 2013, and he's been hit hard. What's going on?

For years, Matt Cain tinkled on xFIP. He allowed far fewer home runs than you would expect for a pitcher who allowed as many fly balls as Cain did. And every year, he flummoxed analysts who were fond of xFIP-based analysis:

This incongruity led to someone at McCovey Chronicles to create Matt Cain's nemesis, xFIP Man:

It's all fun and games until xFIP Man catches you and eats the marrow from your femur while you're still awake.

Goodness. It's not a velocity thing, and all the other statistics for Cain are trending in the right direction:

Pitchers want the blue line to go up and the red line to go down. So far so good. The only thing different with Cain is that he's allowing twice as many home runs for every fly ball hit against him. Sounds like a case of small-sampleitis. I'll just get my things and …

Except, hold on a second. Just because samples are small, doesn't mean they're not trying to tell us something. Over his last 22⅔ innings, Cain has allowed 21 runs. Let's at least look at how.

Warning: There are a ton of pictures coming. Feel free to skip to the bottom if it gets monotonous.

Well, say, this one's going to take a while. There weren't any home runs in this game, but there were a lot of hits. The Cardinals should have two outs by now, but I haven't been to the park in a while. 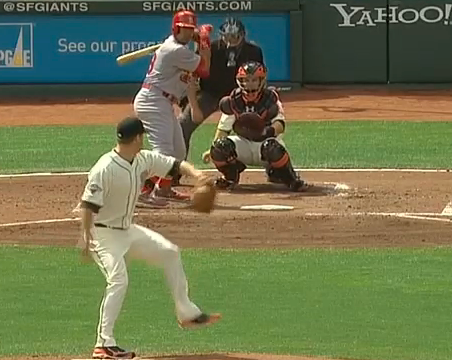 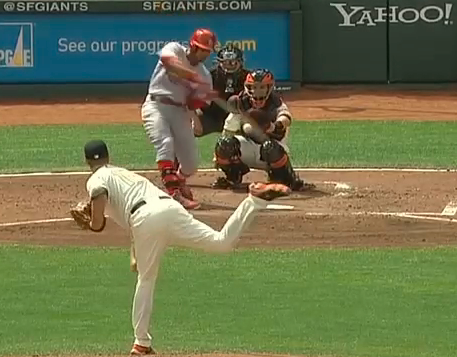 Looks like that's where the pitch was supposed to go on a 2-1 count. Jay put on a good swing. While Cain isn't a flamethrower, 89 is still on the low side for him. 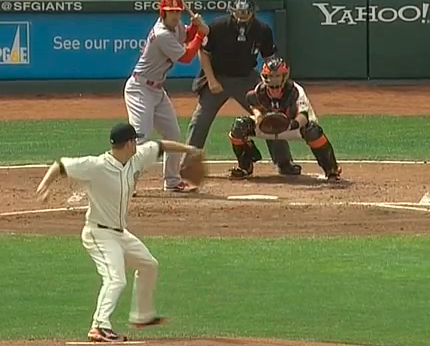 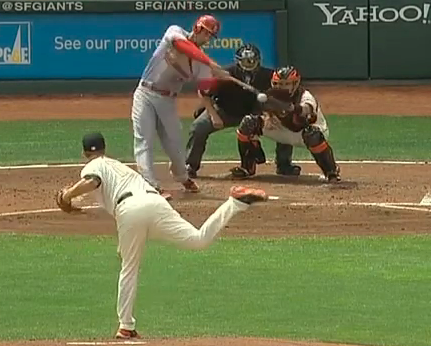 Leaked out a bit, but it was still pretty close to what Posey wanted. Again, the missing extra foot for that fastball is probably a part of the problem. 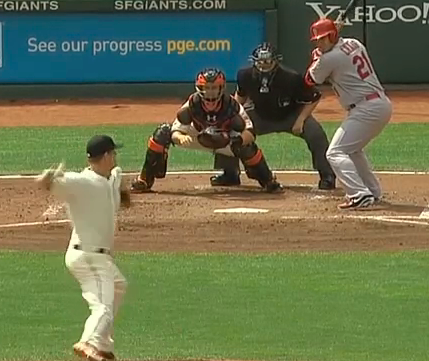 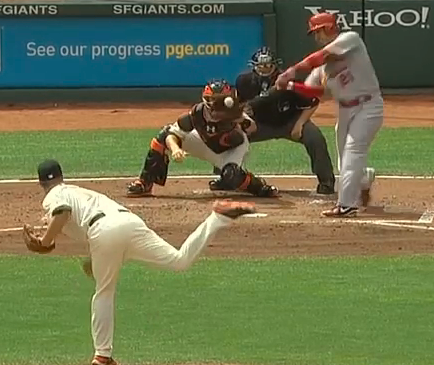 Don't even know if that was really a slider or if GameDay got crossed up. Whatever, it was probably the worst pitch of the inning, and Cain was lucky to get an out with it. 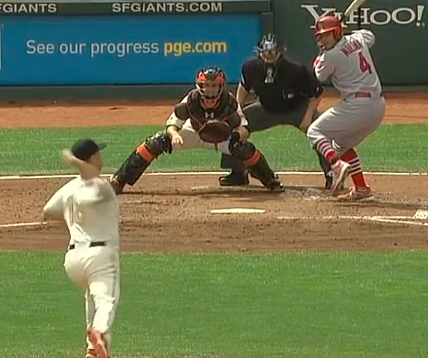 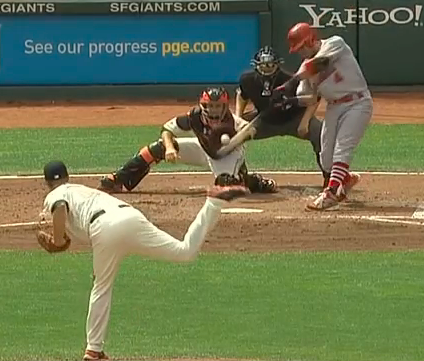 When Cain misses even by that much with a slider -- especially when his fastball is at 89 -- he's vulnerable. The ball found a hole, but Molina hit it hard.

After a walk to Carlos Beltran, up came… 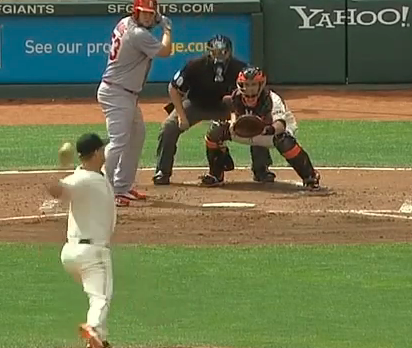 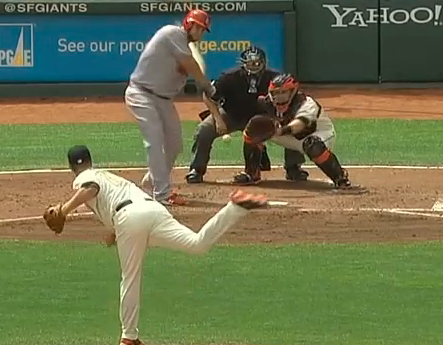 Whoops. It would have been a home run in 29 different ballparks, and it was the biggest location mistake of the day. It wasn't over the heart of the plate, though. 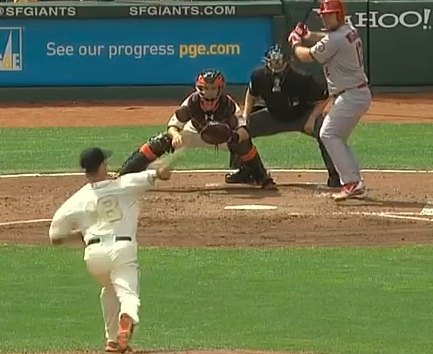 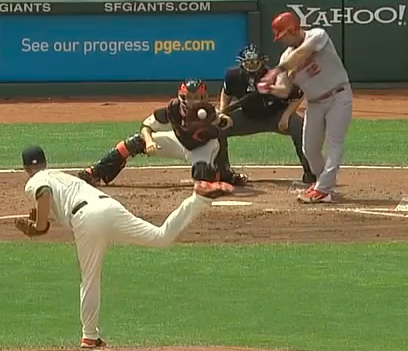 It's up. But it's at this point where Cain would have been justified in burying himself under the mound. One o' them days, man.

This was a bloop single that went 120 feet from home plate. No need for the pictures. One o' them days. 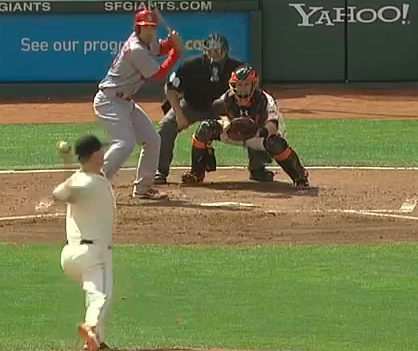 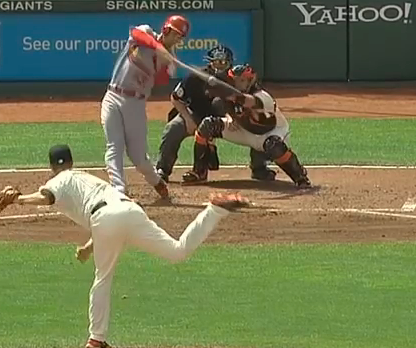 Sliders don't go there! That was the hit that chased Cain, and reliever Jose Mijares allowed two of the inherited runners to score. 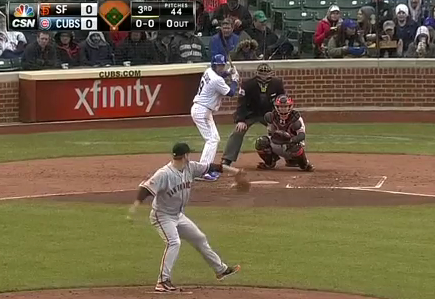 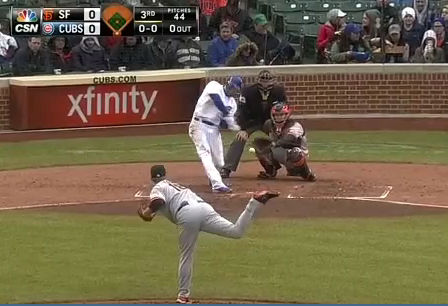 Completely missed, and Cain was punished. 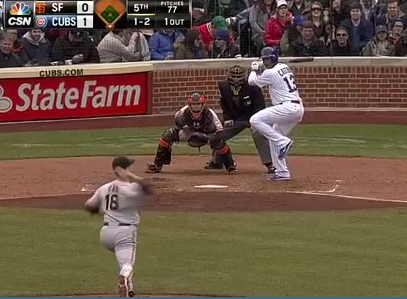 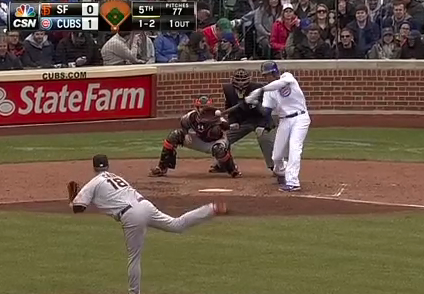 Good chance that this was one of the 25 worst sliders Cain has ever thrown in his life. Take a look. It's eating-a-wheel-of-cheese impressive.

Where Hector Sanchez sets up: 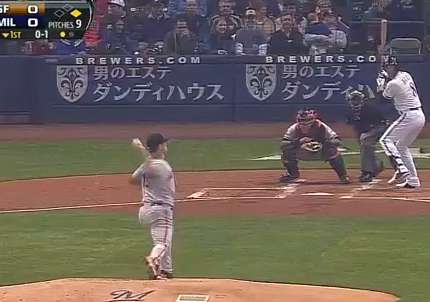 Point of order: I don't really know where Sanchez sets up because he doesn't set a target before the pitcher releases the ball. But that's a topic for another time! 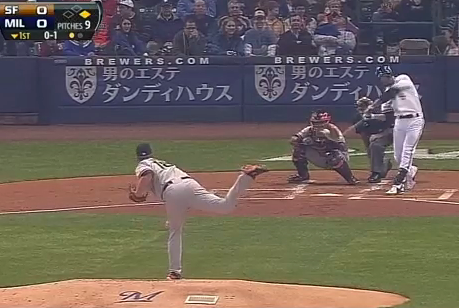 Seeing a trend. Those sliders aren't sliding, nor are they going where they're supposed to. The lowered velocity from the Cardinals game is gone, a trend that started with the Cubs game. But hanging a slider like that to Ryan Braun is -- gonna go on a limb here -- a bad idea.

Where Sanchez sets up: 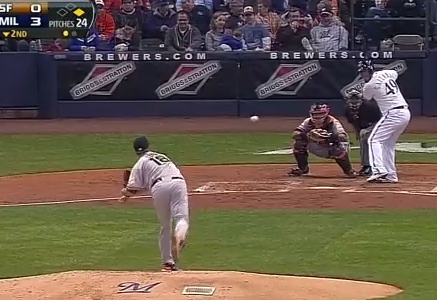 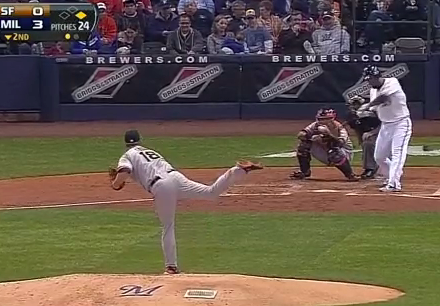 I can't ever complain about a get-it-in fastball to a pitcher, even if the pitcher hits as well as Gallardo. Walking a pitcher is a sin. Giving up a homer to a pitcher is the "Go to jail" space on a 240-square Monopoly board.

Where Sanchez sets up: 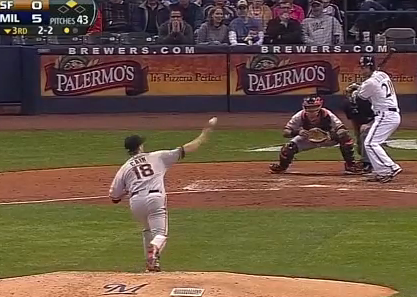 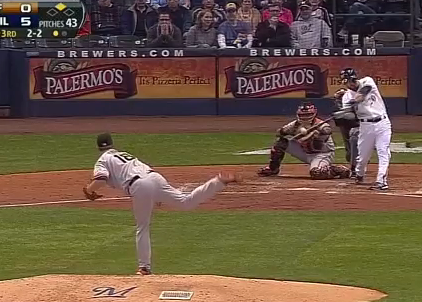 Another brutal hanger. Cain was as demonstrative as I've ever seen him, almost seizing in disgust because of that curveball. 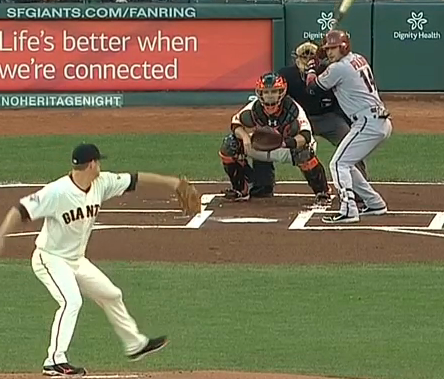 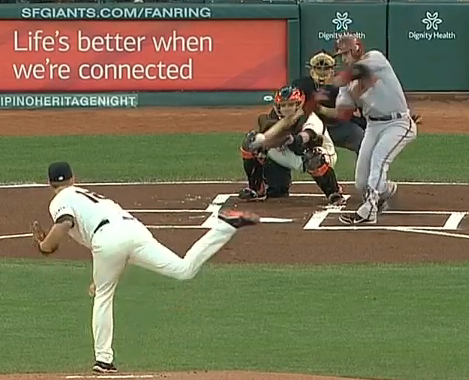 The first batter of the game reached on an error, and this was a first-pitch, get-it-in fastball to the next hitter. Should have had better location, but I don't think there was supposed to be a lot of mystery with this pitch. 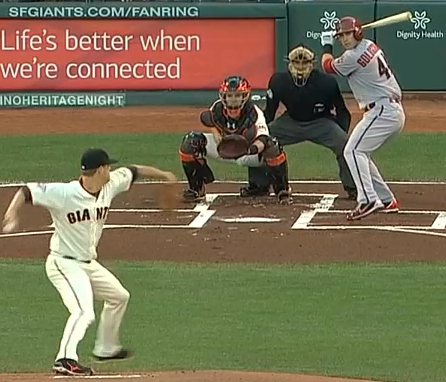 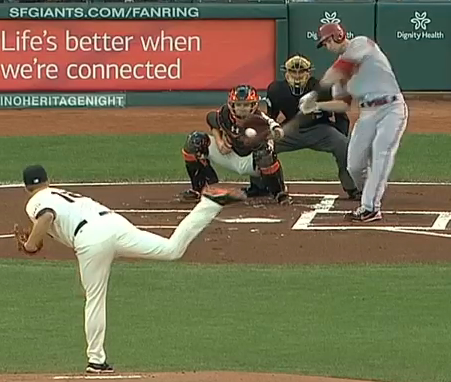 This jammed Goldschmidt, and the ball went 30 feet behind first, dropping right on the foul line. It was down the middle of the plate and away from the target. Still, 93 m.p.h. from Cain makes up for a lot, and if Hunter Pence wasn't playing in deep right-center, he probably would have caught it. 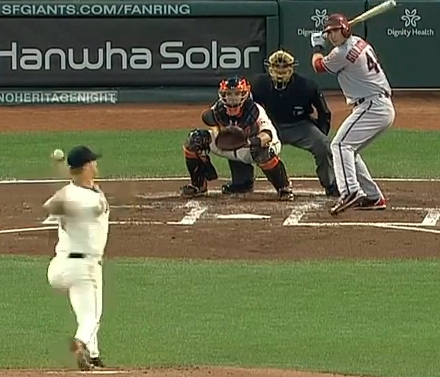 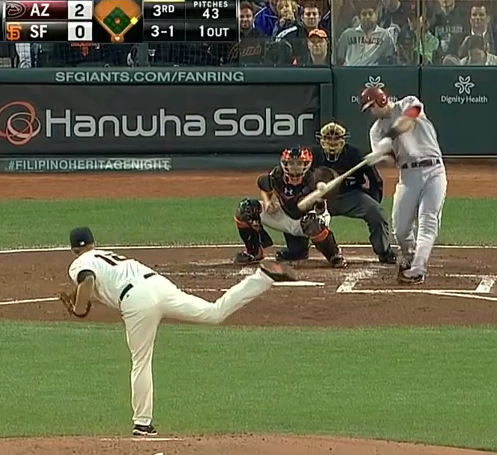 That was on a 3-1 count, with Goldschmidt likely sitting fastball. Good gravy.

Those are the runs allowed by Matt Cain this year. Now comes the part where we talk about what it means. Here goes:

As in, Cain has made a lot of bad pitches this year, and he's been punished for them. But in order to differentiate between "lucky" or "unlucky" -- or, at least "likely to continue" and "unlikely to continue" -- you would have to know how many bad pitches Cain got away with in the past. It's not like he made it from 2005 through 2012 without missing any spots or hanging any sliders. But it's not realistic to expect a "crappy pitches thrown" statistic. Maybe someday. Not now.

Moreover, it's not realistic to go back and look at every single pitch Cain has thrown this year to match up where the catcher sets up and where the pitch goes. These are the action plays, where something happened that eventually led to a run. But is Cain missing just as badly with the outs? Maybe he's been lucky.

The problem is easy to identify: command. Cain can throw strikes, so he has control, but he's missing badly in the strike zone, which means his command is off. My tentative conclusion is that Cain's been punished for his mistakes more than the typical pitcher should expect, and that the previous 1,537 innings are more instructive than the last 28.

But there's no question that, at least in the early part of the season, the ball isn't quite going where Cain wants it, and it's led to the worst month of his career so far. It isn't luck, at least in the way we think of it.