Brooklyn Nets must solve spacing issues to come back vs. Chicago Bulls

The Brooklyn Nets are down 2-1 in their series against the Chicago Bulls because they are consistently playing 3-on-5 offensively. It's time for P.J. Carlesimo to avoid playing Reggie Evans and Gerald Wallace at the same time.

Share All sharing options for: Brooklyn Nets must solve spacing issues to come back vs. Chicago Bulls

Coaches, no matter what year, what team and what series, are historically reluctant to make major rotation adjustments in the middle of an NBA Playoff series. It's understandable to some degree, especially for the team with the better record. You experienced a lot of regular-season success playing the guys you have in the way you've set it up, so why change that just because a little adversity strikes? Trying to alter too much at once can cause a lot of chaos.

But at the same time, we've seen rotation adjustments win series. The Dallas Mavericks wouldn't have defeated the Miami Heat in the 2011 NBA Finals unless Rick Carlisle inserted J.J. Barea into the starting lineup. The Golden State Warriors wouldn't have won Game 2 in Denver on Tuesday if it weren't for Mark Jackson's decision to ditch his team's normal style of play and start Harrison Barnes at power forward in a small lineup. Rotation adjustments often work more than many coaches think.

This is the predicament Brooklyn Nets coach P.J. Carlesimo is in following his team's 79-76 Game 3 loss to the Chicago Bulls. His team won lots of games playing Gerald Wallace and Reggie Evans at the same time, but it's just not working in this series. Their inability to produce offense is forcing Brooklyn to play 3-on-5 offensively. It's time for Carlesimo to adjust his rotation to add more offensive threats on the floor and split Wallace and Evans up as much as possible.

There are so many problems that result when you pair Evans with Wallace. Here are just a few examples from Game 3.

In Evans' case, he's incapable of doing anything but grab offensive rebounds -- and he isn't even doing that in this series. His screen-setting can be a strength against other teams, but with the way the Bulls are ignoring him, that's been rendered ineffective.

The Bulls delighted in Evans' presence on the floor because it allowed them to load up against Brooklyn's primary play. In this example, Carlos Boozer leaves Evans wide open underneath the hoop to prevent Brooklyn from easily isolating Joe Johnson on the left wing. 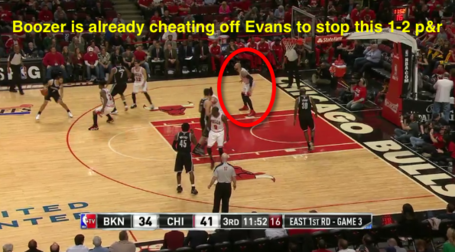 Evans tries to compensate by screening for Brook Lopez, but that makes things worse. Joakim Noah can now guard two people at once. 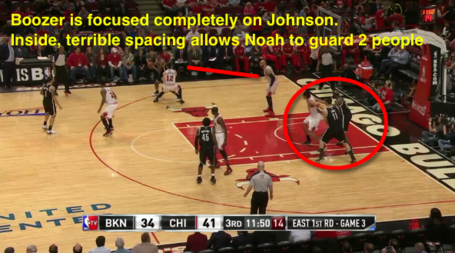 Eventually, Lopez breaks free in the middle for an instant, and as he catches the ball, four Bulls surround him. This is normally a good thing for a team! Evans is now wide open underneath the hoop! 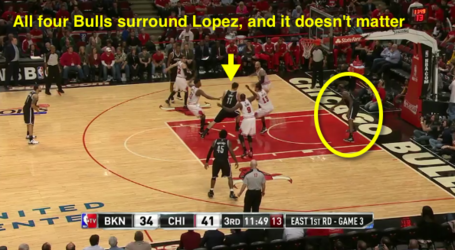 But ... the Bulls recover, Lopez doesn't think to pass it soon enough because it's Evans, and the Nets turn it over. 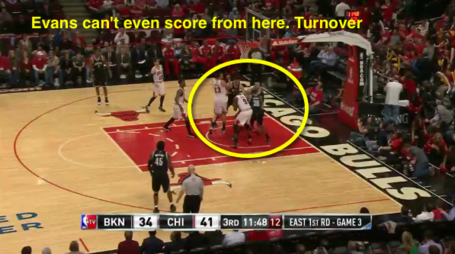 If Brooklyn can't score in this situation, why would anyone bother guarding Evans? Here's the play in real time.

Here's another situation where the Bulls pay Evans no mind underneath the basket. Chicago triple-teams Deron Williams coming off a screen, forcing him to give it up. Normally, someone's open when a player is being triple-teamed, and that is indeed the case here.

However, notice how Boozer has already started to rotate to Lopez, even though it would again leave Evans open underneath the basket. That's how little the Bulls respect Evans. 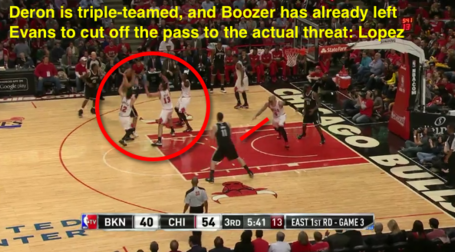 Evans ends up hurting the Nets' spacing by cutting too close to Lopez for a legitimate pass to be made, and Lopez misses a contested layup. 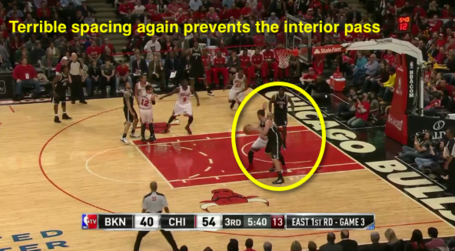 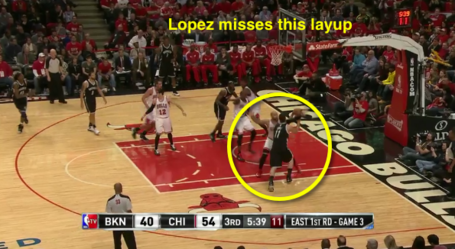 At this point, Wallace isn't much more of a threat than Evans. The Bulls have consistently left Wallace open from the perimeter since Game 1, and Wallace has not done anything to make them regret their decision.

This middle isolation is the best of several examples of Chicago's lack of respect for Wallace in Game 3. The Nets will get the ball to Johnson at the free-throw line against Jimmy Butler. Normally, this is an ideal spot for an isolation, because the man with the ball can pick out any open shooter he wants with an easy pass. But in the Nets' case, Wallace is not respected as a "shooter," allowing Luol Deng to cheat and cut off the lane. 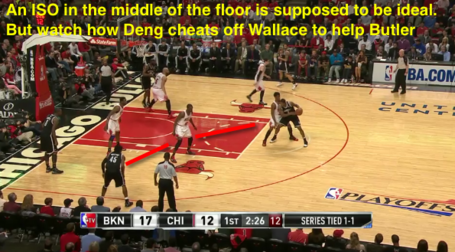 As Johnson pushes Butler deeper into the paint, Deng helps further off Wallace. Making matters worse, Andray Blatche is situated on the same side as Wallace, allowing Nazr Mohammed to guard two players by himself. 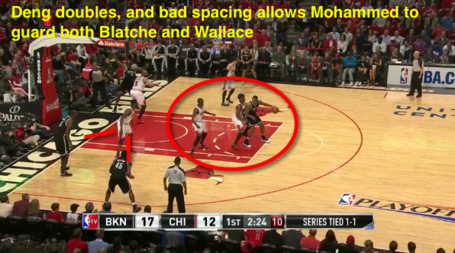 Eventually, Johnson will turn to his right in an attempt to shoot over Butler. As that happens, Deng decides to leave Wallace open completely to bother Johnson's move. 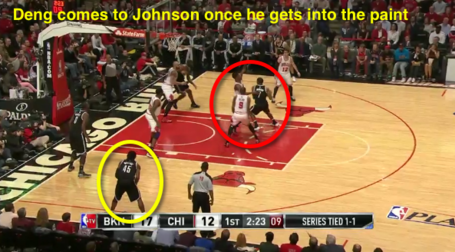 Johnson has no choice but to pass to Wallace and hope for the best. The best does not come, as Wallace bricks another open three. 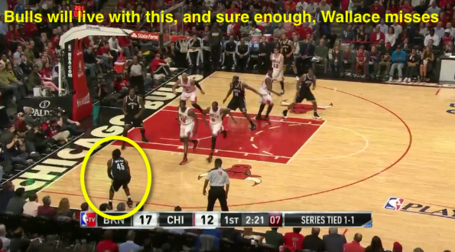 Consider how little respect the Bulls paid to Wallace and Evans individually. Now, consider what happens when little attention is paid to both of them on the same possession.

For example, here's a play where a Williams isolation is swallowed up by the overloading Bulls' defense. 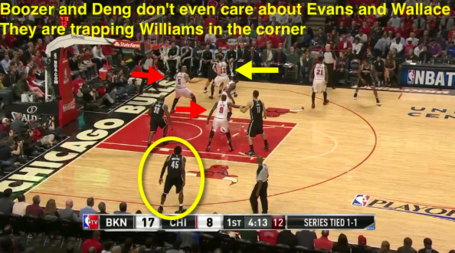 The Bulls bring Boozer (Evans' man) to trap Williams aggressively, Deng (Wallace's man) to cut off Lopez and Mohammed to guard a zone. They again leave Evans open underneath the basket and don't bother to defend Wallace at all on the opposite side.

As we roll forward, Evans, determined to do anything possible to avoid being involved in the play, runs in front of Lopez's path, further messing up the spacing. 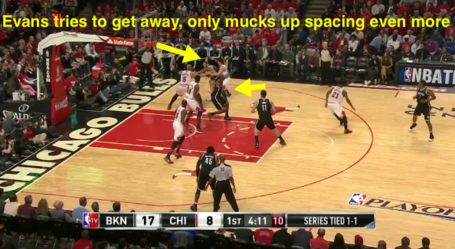 Lopez cuts to the basket, but this only sets up the next round of Bulls rotations. This time, Boozer traps Williams even more aggressively, Mohammed remains in his zone, Butler half-heartedly deals with whatever the threat of Evans is while also guarding Johnson, and Deng leaves Wallace all alone to help on Lopez. 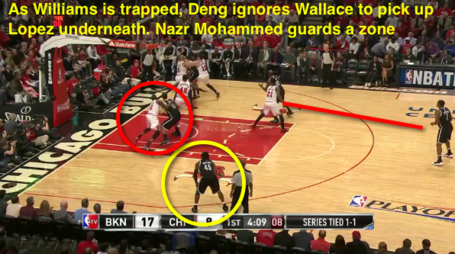 Williams' only pass is to Evans away from the basket, and with so little time on the shot clock, Evans has to do this. 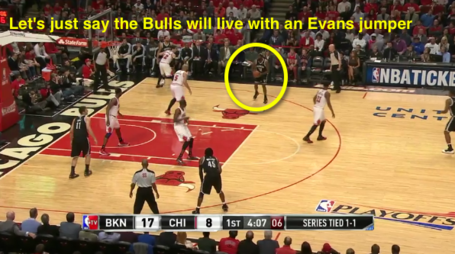 You'll never believe this, but Evans missed the jumper. Here's the play in real time.

Here's one final example where the presence of Wallace and Evans together forces Williams into a difficult shot. The Nets are running a post play for Lopez, and Evans is supposed to set it up with a strong cross-screen like in many of these plays. But because Evans is not an offensive threat, Boozer pays no attention to the screen and simply stands in the passing lane the Nets are hoping to create. 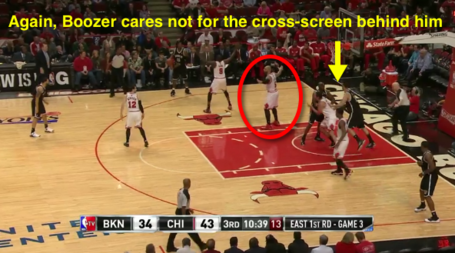 Boozer ends up fronting Lopez in the post, which works because Evans is right next to Lopez, pulling Noah in to protect against the lob. 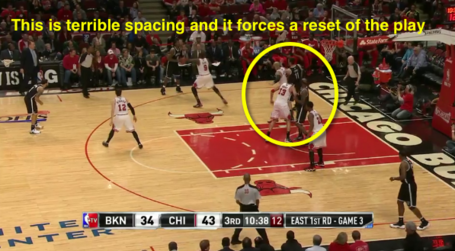 The ball eventually gets thrown out to Williams, who will try to make a one-on-one move on Kirk Hinrich. His efforts are thwarted, though, because Deng will cheat off Wallace on the left wing to plug dribble penetration. 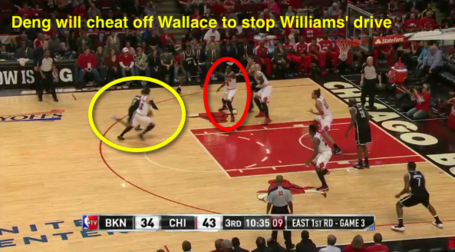 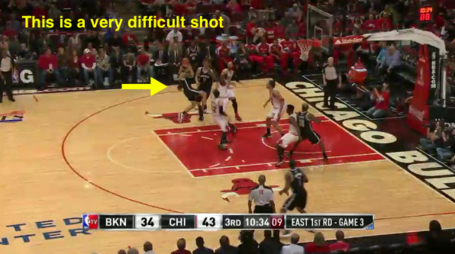 The Nets don't have the deepest bench in the world, but they simply cannot keep playing Wallace and Evans together anymore. One solution: start C.J. Watson over either Wallace (in a three-guard lineup) or Evans (moving Wallace to power forward). Another is to play MarShon Brooks more, especially after he helped bring the Nets to the brink of a comeback in Game 3. Keith Bogans could also merit more minutes because he can at least hit an open three, unlike Wallace or Evans.

But something has to change if the Nets are to come back in this series. Carlesimo may be reluctant to give up size on the defensive end, but his offense is in such bad shape that the tradeoff is necessary. If I were Carlesimo, I wouldn't play Evans and Wallace together for another minute this series.