David Kahn is reportedly on his way out, and the Wolves can get down to business

David Kahn is reportedly out in Minnesota, with Flip Saunders taking over the general manager job. We explain why now is the perfect time for the Timberwolves to move on from the Kahn era.

Share All sharing options for: David Kahn is reportedly on his way out, and the Wolves can get down to business

If you were going to handpick a listless franchise to take over for the 2013-14 season, you couldn't do much better than the Timberwolves. Despite winning just 31 games and continuing a nine-year postseason drought, Minnesota is well-positioned to make a big leap next season, much like they were positioned to do this season until injuries wrecked their plans.

Health is almost always the key factor when a team disappoints on a level like the Wolves did in 2012-13. Basketball Prospectus projected 56 wins for Minnesota, and considering Kevin Love's development into an elite player, that wasn't that surprising.

But Love played in just 18 games due to hand and knee injuries and Ricky Rubio appeared in only 57 after undergoing knee surgery. In addition to their two young stars, Andrei Kirilenko and Nikola Pekovic missed 38 games between them and Chase Budinger suited up in only 23 contests.

Considering all their health issues, it was something of an accomplishment that Rick Adelman managed to coax those 31 wins out of a habitually depleted roster. While the offense was painful to watch, the Wolves made an appreciable leap defensively, moving from 25th to 13th in points allowed per 100 possessions.

Kahn out, Saunders in 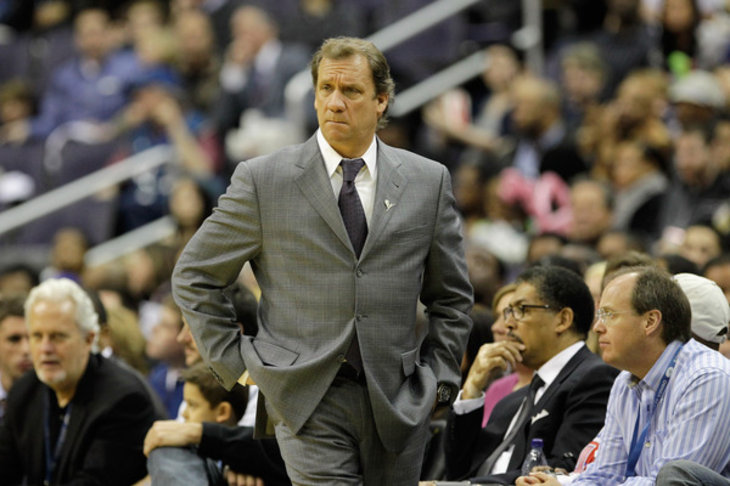 Canis Hoopus reacts to the news.

For all the weird things David Kahn did as GM, he did increase the talent level in Minnesota by drafting Rubio and adding Kirilenko and Alexey Shved. But Kahn had far more misses than hits. He famously drafted Jonny Flynn over Stephen Curry in the 2009 NBA Draft and followed that up by tabbing Wesley Johnson ahead of DeMarcus Cousins in 2010 and Derrick Williams over Jonas Valanciunas in 2011.

He also gave out $5 million/year contracts for Darko Milicic -- later amnestied -- and Brandon Roy, who sadly, but unsurprisingly barely played because of chronic knee injuries. He traded Al Jefferson for nickels on the dollar and dumped Corey Brewer and Kosta Koufos for nothing.

Perhaps the oddest series of Kahn moves involved trading the draft rights of Ty Lawson and the draft rights of Luke Babbitt for Martell Webster, whom he waived to make a run a Nicolas Batum. Lawson has become a very good point guard, Batum never left Portland after the Blazers matched the restricted free agent offer sheet and Webster went on to have a bounceback season for the Wizards after dealing with injury problems.

Now, it appears that Kahn's run is over, per NBA.com's Steve Aschburner. Former coach Flip Saunders will reportedly be brought back into the organization and Kahn will be out. Saunders had a strong run as coach during the Kevin Garnett days, but he's thin on front-office experience.

There are decisions to be made on Pekovic, who can be a restricted free agent, as well as Williams, who made incremental progress in his second season but has yet to fully grasp a defined role in the NBA. The Wolves will be right around the salary cap depending on whether Kirilenko exercises his opt out, and the roster is not quite finished.

As much as the Wolves need sharp drafting and canny free agent maneuvers, more than anything, they need a unifier. Adelman's season ended with his 1,000th career victory and doubts about whether he'd be back because of his wife's serious health issues. His input on personnel decisions and stabilizing influence is credited with helping restore Minnesota's credibility. Whether he returns is every bit as important as whoever is running the front office.

Whether [Adelman] returns is every bit as important as whoever is running the front office.

Love spent the season battling injuries and alienating fans after an interview with Yahoo's Adrian Wojnarowski where he let off steam about his four-year contract extension. Yet for all that, there's still plenty of time for Love's relationship with the franchise to be repaired.

For all the behind-the-scenes drama, the Wolves are still in decent shape. Making health assumptions is risky, but they will almost certainly be better next season. If Love and Rubio can play 75 games apiece they should be in contention for a playoff spot. If this seems like an inappropriately sunny take on the Wolves future, the great Britt Robson has some dark clouds in his forecast.

Whether Saunders is the man for the job will be left to history, but if Kahn is indeed out, then Minnesota can finally go about its business without the annoying personality distractions and cataclysmic blunders that marked so much of his tenure. That, in and of itself, is a good thing.

David Kahn out, Flip Saunders in as Minnesota Timberwolves' GM