Stephen Curry put on a show in Game 4 of the Warriors' series against the Nuggets. How much can we blame Denver's defense? A lot, actually.

Stephen Curry and the Golden State Warriors have put on an incredible shooting display to take a 3-1 lead on the Denver Nuggets. Game 4 was punctuated by a 22-point third quarter for the Warriors star, as he dazzled the Oracle Arena crowd with three after three after three.

The Warriors have certainly shot the lights out in this series. Curry has now hit 18 of his 38 threes and is shooting 50 percent overall. Harrison Barnes is hitting nearly 44 percent of his threes and 50 percent overall. Jarrett Jack is shooting 62 percent in the series. Draymond Green, who shot 33 percent from the field and 20 percent from downtown in the regular season, has hit 9-of-14 from the field and 4-of-8 from three-point range in this series. Some of this is just hot shooting. Curry in particular won't hit this shot every night. 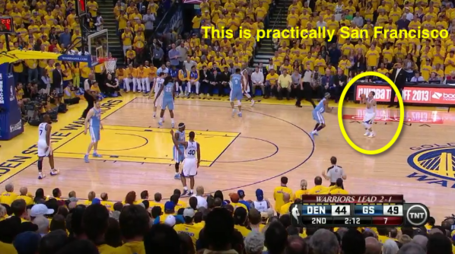 But a lot of it is also bad Denver defense.

We've already talked about the terrible breakdowns that took place in Game 2, and things haven't improved a lot since then. The Nuggets used a hard trap to get the ball out of Curry's hands in Games 3 and 4. This occasionally worked, but was eventually solved in the first half of Game 4 when Andrew Bogut realized he would be wide open if he just slipped every ball screen. Denver's first-half defensive performance in Game 4 was pretty terrible.

The one thing Denver could hang their hat on: the above screenshot was Curry's only first-half field goal. As the Nuggets rallied in the third quarter, Curry still had been stymied.

But those terrible breakdowns soon returned, as the Nuggets allowed Curry to get hot and sink any chance they had at tying up the series.

We pick things up with the Nuggets down by just four midway through the quarter. A pull-up jumper by Ty Lawson punctuated an 18-7 run to get Denver back into it. George Karl stuck Corey Brewer on Curry, and to this point, Brewer had done his job. But that was before a terrible gamble got Curry going.

The Warriors run a pick and roll between Jarrett Jack and Carl Landry, with Curry spotting up on the opposite side. 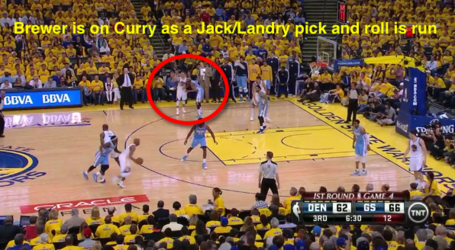 The Nuggets trap Jack, as they have done all game, and Landry will end up being open at the top of the key. An 18-foot jump shot, in the grand scheme of things, isn't the most efficient attempt in the world, even though Landry is one of the league's best at hitting it. You'd rather have Landry taking 18-footers than anyone taking a three, much less Curry.

So why is Brewer doing this? 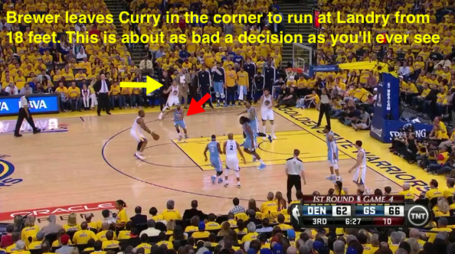 This is one of the worst decisions a help defender can possibly make. Instead of staying with Curry or even stunting (i.e. faking a rotation to mess up a shooter's rhythm), Brewer dashes head-on to Landry while leaving the most dangerous shooter in the NBA wide open.

Predictably, Brewer doesn't get a steal, and he even overruns Landry. Meanwhile, nobody on the Nuggets rotates fast enough to Curry because they aren't prepared for Brewer's gamble. 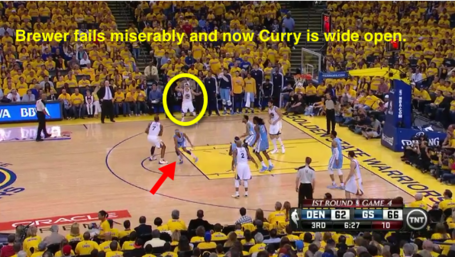 Curry pump-fakes to get a rotating Wilson Chandler in the air and ultimately sticks the three. 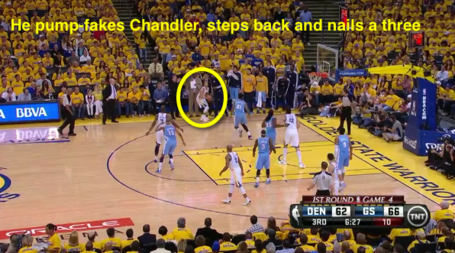 That play by Brewer was bad, but the mistake he makes on the next possession may be even worse. After a missed shot, Jack rebounds the ball and dribbles up the right wing. Andre Iguodala is on him and the play is contained ... and yet, Brewer still feels the need to attempt to trap Jack while again leaving the most dangerous shooter in basketball unguarded. 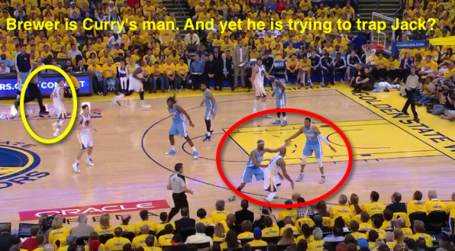 Iguodala seems confused too. If this was a designed trap, Iguodala would be right in Jack's face like Brewer is. The fact that he isn't shows me that Brewer is going rogue.

As we roll the play forward, Jack manages to dribble to the corner. As that happens, the other Warriors cut to the basket, leaving Curry open. 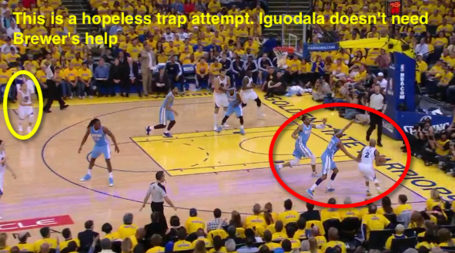 Again: if this was a coordinated trap, Iguodala would be pressuring Jack too. He isn't, and that allows Jack to whip the pass out to a wide-open Curry for three. Brewer could not be further away from the play. 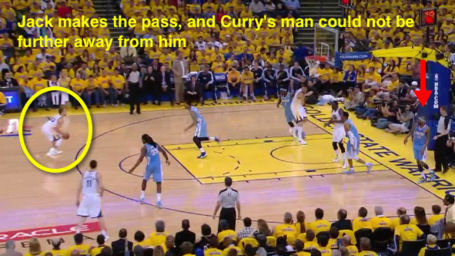 Brewer's gambling convinced Karl that he wasn't fit to guard him, so the coach made a switch. But rather than put Lawson (a conventional matchup even despite Lawson's defensive issues) or Iguodala (one of the league's best perimeter defenders) on Curry, Karl chose 37-year-old Andre Miller. This was a laughable decision. Miller is too slow to guard most guards, much less ones as deadly as Curry.

Curry proceeded to go to work on Miller. On one play, he used his quick release to catch Miller napping on a wing three. On another, he crossed Miller up, put him too off-balanced to contest and drained a mid-range shot. And then there's this play, where Curry made Miller look silly for guarding him so far away from the basket. 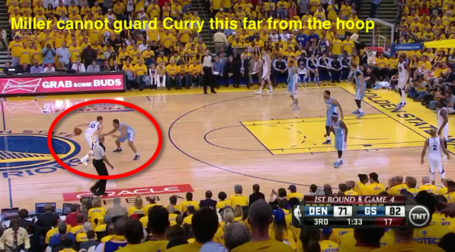 Curry easily got by him and was able to get to the hoop for a finger roll and the foul. The blow-by happened very high on the floor. 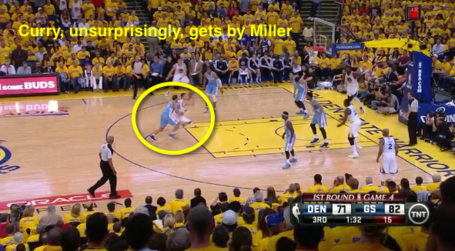 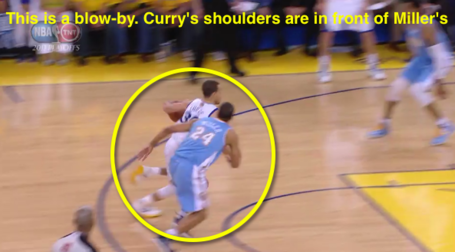 It happened so fast that the Nuggets' help defenders were too slow to react. While Curry ultimately makes a difficult floater, he had a clean look at the rim at the time of the release. 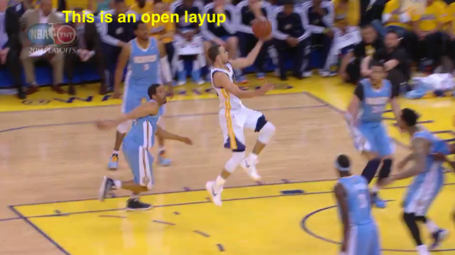 All this convinced Karl to put Brewer back on Curry later on ... which led to one of the more amusing defensive breakdowns you'll ever see. Curry begins this play by bringing the ball up and throwing a behind-the-back pass out to Jack. From there, Brewer loses Curry again. 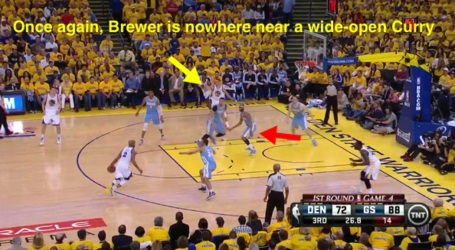 This is where things get especially hilarious. You'll notice that there's another player -- Green -- open in the opposite corner. Rather than chase out to Curry, Brewer and JaVale McGee run into each other chasing Green. 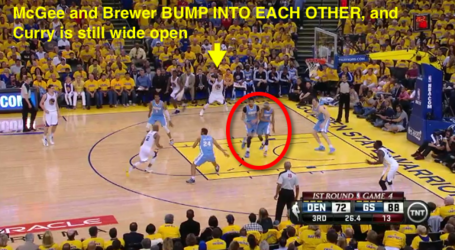 That, of course, leaves Curry open for the last of his third-quarter daggers. 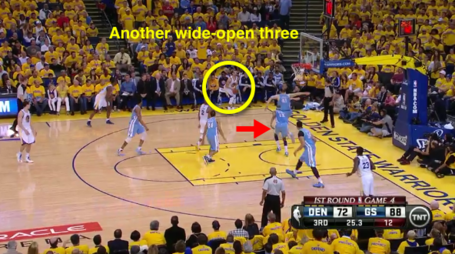 Here's this play in real time.

Did Curry and the Warriors hit some difficult shots as well? Of course. But these are inexcusable breakdowns that only serve to give a player like Curry confidence to keep raining threes.

Otherwise, they will be gone fishin' on Tuesday.

• Flannery: No brooms in Boston

• The best GIFs from Sunday night