Lon Babby's greatest hits: should Suns have kept him in power?

The Suns extended Lon Babby. Bad move, or fair decision to allow Babby to implement his vision? The Hook considers both sides.

Share All sharing options for: Lon Babby's greatest hits: should Suns have kept him in power?

The Phoenix Suns announced an extension for Lon Babby on Tuesday. The fact that there's a real possibility the Suns used the distraction of the Arizona Cardinals trading for Carson Palmer as cover to make the announcement tells you all you need to know about how Phoenicians feel about the team right now. Babby took over during the 2010 offseason. This is what has happened to the Suns since then. 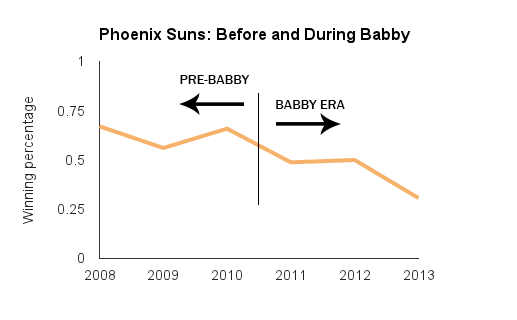 In fairness to Babby, this transition was always coming, because Steve Nash's career was winding down. But the problem is that Phoenix is really quite awful but with few (if any) stars in the pipeline. The Suns' top pick in the 2013 NBA Draft -- which could be anywhere from No. 1 to No. 6 -- will be the team's best asset by a large margin. If Babby has tried to set up a post-Nash, post-Stoudemire rebuild, he's done a pretty poor job of it. As of last month, the Suns had a weighted age of 27, right at league average. The third worst team in the league should be one of the youngest. It's not the case here, because it appears Babby either did not embrace a rebuild or just did a poor job of it.

More: Year 1 or Year 3 of Phoenix's rebuild? More from Bright Side of the Sun

With the extension, Suns owner Robert Sarver is basically giving Babby a total of five years to establish and implement a plan. We're three years in, and the Suns are literally as bad as they have ever been. That doesn't exactly bode well. The team's best players are Goran Dragic (age 26), Jared Dudley (27) and Marcin Gortat (28). Its best player under the age of 25 is Markieff Morris. For comparison's sake, the Kings (third worst in the West) have four players under 25 better than Morris. And no one's really expecting the Kings to be on top of the world by 2015, which is when Babby's contract now expires.

That said, I generally support giving a general manager plenty of time to implement his vision. Personnel revamps come slowly in the NBA due to trade rules and relatively long guaranteed contracts. It's a tricky balance: by extending someone like Babby, are you dropping good resources after bad, or are you allowing a plan to be fully implemented? It has to be judged on a case by case basis. My preference is to look at all of the best moves and the worst moves and assess whether the guy seems to have a plan, whether it's a good plan and whether he's implementing it well.

And I'm honestly not sure Babby had a real plan until the Suns got off to a bad start this season.

* He offered Eric Gordon -- young, but coming off of a bad injury -- a max contract. New Orleans matched. Chasing young stars is a good strategy, but it's typically fruitless. And Babby's back-up plan -- sign Michael Beasley -- was seriously unfortunate.

* He basically let Steve Nash walk away. When the legend picked the Lakers over the Knicks and Raptors, the Suns participated in a sign-and-trade that netted what could be the No. 14 pick, which is a nice asset. But had Nash chosen one of the other teams, the Suns would have gotten nothing. Babby didn't seem to have a plan to turn Nash into an asset. A team with a plan might have considered trading Nash in the 2011 offseason or at the 2012 deadline. But he picked up a pick nonetheless.

* He traded Robin Lopez and Hakim Warrick for Wesley Johnson and what will end up being the Grizzlies' pick in the mid-20s. Again, nice work picking up a draft pick. Johnson is roster chaff. Lopez is the best player in the deal. But picks (even low firsts) are more valuable than back-up centers for a bad team. Jermaine O'Neal has been a fine replacement in terms of on-court value.

* He signed Goran Dragic. Dragic is the Suns' best player. The contract isn't too onerous. Good move! Dragic is also the youngest of the Suns' good players.

* He drafted Kendall Marshall. That doesn't exactly look like a good pick at this point, but you have to give rookies time.

* He picked up Luis Scola off of waivers. Scola has been pretty darn good. He is also 32 going on 47.

Then, during the season, Babby fired Alvin Gentry and replaced him not with one of his assistant coaches (who are all pretty well-respected), but with one of his front office guys, Lindsey Hunter. And now Hunter is drawing fire for scratching a healthy Dragic to give Marshall some more playing time and, one can only surmise, help the Suns' clinch the league's third worst record. This all fits with the plan pursued in the offseason: get younger. Bolster those picks. Develop the youth. This is all standard rebuild stuff.

The problem is how long it took Babby to get here. The Suns' first move after hiring Babby was to trade for Hedo Turkoglu's spectacularly bad contract. Babby happened to be Hedo's agent before switching to the team side. Welp. Hedo was obviously a disaster, and the Suns had to lose Jason Richardson (one of the team's better players) to lose Turkoglu, taking back Mickael Pietrus' onerous contract along with Gortat. The Suns also pulled a sign-and-trade for Josh Childress ... a player they would use the amnesty waiver on within two years.

Of course, much of that happened as Babby was arriving -- Sarver could have made those calls, for all we know. But they all delayed the rebuild Phoenix sorely needed, and they all count on Babby's ledger. And now the issue is that it's extremely unlikely the Suns will be anywhere near the playoff picture two years from now. Will Sarver continue to stick with Babby's plan? Or at that point will Sarver look to have someone else take the reins? Those are the sorts of questions this extension raises.

All in all, the Suns' plight just reaffirms that teams really need to understand when it's time to start that rebuild. Phoenix under Babby held on to being a decent non-contender for too long, and it's costing them now. Fortunately for him, it won't cost Babby his job. For now.

• Ziller: Expansion is the only fair solution

• Can you dig it? Shaq's jersey retired