2013 Final Four: The 5 things that will decide Louisville-Wichita State

Louisville is the obvious favorite in Saturday's first Final Four game, but Wichita State can hang around if it hangs tight in a few specific categories.

Share All sharing options for: 2013 Final Four: The 5 things that will decide Louisville-Wichita State

Louisville is an 11-point betting favorite against Wichita State in the Final Four's first game on Saturday. The Cardinals are the overwhelming favorites to win the national title, the No. 1 overall seed in the tournament and bring all sorts of big-game experience to the table. But Wichita State has already beaten two or three elite teams to get to Atlanta and has handled the ever-growing spotlight with aplomb thus far. Here are the five factors that will most likely decide who plays the Syracuse-Michigan winner Monday night for the title.

The Cardinals are unique and terrifying, and they take advantage of every mistake.

Wichita State has played eight games against NCAA Tournament teams this year -- VCU, Pittsburgh, Gonzaga, La Salle, Ohio State and Creighton three times -- but only one ranked particularly high when it comes to forcing turnovers. However, that one team was Shaka Smart's VCU Rams, the only team better at turning teams over than Louisville. In that game, the Shockers turned the ball over just 13 times (a 21 percent turnover rate that was quite a bit lower than VCU's season average). Granted, they also couldn't hit a three-pointer to save their lives and barely won. But aside from a few shaky moments, they withstood the pressure VCU brought to the table, just as they did in the Elite Eight versus Ohio State. They briefly stumbled late, but they rebounded and won.

Louisville's pressure, like that of VCU, grinds away at you. The Cardinals' goal is not to play some up-tempo, Nolan Richardson-style system; they play at an average pace but make you work to complete every pass, clutter up the passing lanes and use their length and athleticism to their utmost advantage. They are unique and terrifying, and they take advantage of every mistake. Can WSU handle this pressure without a couple of two-minute glitches (and the 8-0 runs that come with them), especially considering their best assist men (Malcolm Armstead, Fred VanVleet) are also their most turnover-prone players?

WSU needs to be three-mendous 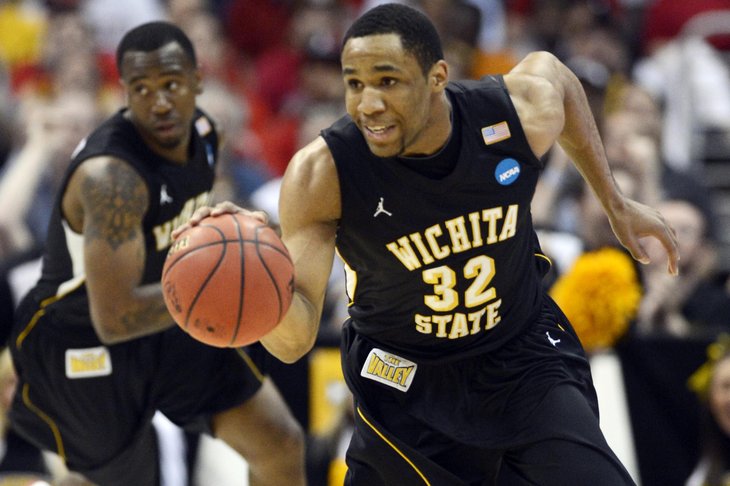 Mid-Major Madness explains that while Wichita State's main game is playing tough defense, the Shockers have a clutch weapon in their three-point shooting to create havoc on offense.

On average, Louisville neither takes, nor makes, many three-pointers. The Cardinals rank 268th in three-point attempts per FG attempt and 223rd in three-point percentage at 32.8 percent. (That number is actually lower when you remove Kevin Ware from the equation -- he made 41 percent of his threes, though he only took about one per game.) Meanwhile, WSU allows you to take a lot of three-pointers overall. The Shockers limit your good looks inside and force you outside. Louisville has four players who shoot a few threes per game, but they only have one (Luke Hancock) who makes them at a better-than-average rate (37 percent). The Cardinals will likely attempt more threes than usual on Saturday evening; if they miss those shots, Wichita State will be able to hang around for quite a while.

Louisville makes up for being an only average shooting team by grabbing a lot of offensive rebounds and getting to the line a decent amount. Wichita State, meanwhile, is not only one of the more foul-prone teams in the country, but it tends to foul players who can make their free throws (i.e. guards). The Shockers have reasonable guard depth -- Armstead, Demetric Williams, Ron Baker, Tekele Cotton, VanVleet -- but the ball-handling could suffer if the they get into foul trouble. And while the Cardinals as a whole are only decent from the line, their primary guards are outstanding. Peyton Siva makes 86 percent of his freebies, Russ Smith 82 percent.

(On the flipside, Louisville is now down a guard after Kevin Ware's awful injury; can Smith and Siva avoid foul trouble of their own to make sure that the Cardinals' best passers and ball thieves stay on the court?)

In four NCAA Tournament games, Wichita State has been good to great on the offensive glass in every game and has dominated the defensive glass in three of four (Gonzaga did quite well in that regard). The Shockers couldn't buy a bucket inside the three-point line against Ohio State and still won, in part, because they won the rebounding battle (and because the Buckeyes missed 80 percent their three-pointers).

WSU is a top-20 team in terms of both offensive and defensive rebounding, and while Louisville hits the offensive glass hard, it doesn't necessarily clean up on the other end. You can overcome some occasional turnover issues if you are buying enough second-chance opportunities, and Louisville's offense can dry up if you keep the Cardinals off the glass. One has to figure the bar is set pretty high here for WSU -- the Shockers probably need an offensive rebound rate of 36 percent or better and a defensive rebound rate of at least 70 percent or so to have a shot of pulling the upset -- but the Shockers are long and athletic and good enough on the glass to perhaps reach those goals.

Wichita State is not a Cinderella team. On paper, the Shockers are a legitimate top-20 team, one that overcame a bad seed and beat three other top-20 teams (Pomeroy rankings for their victims: No. 4 Gonzaga, No. 6 Ohio State, No. 11 Pitt, No. 51 La Salle) to make the Final Four. There is nothing particularly fluky about their run.

Still, this is the Shockers' second Final Four ever; it's Louisville's second Final Four in two years. The "play angry" mantra has looked good on Wichita State, but can the Shockers muster up the same level of anger after a week of celebration and congratulations? One has to assume that Louisville will be both level-headed and impressive; if Wichita State plays its best game, the Shockers can compete. Anything less, however, probably won't be enough.