Who belongs in NBA MVP conversation?

LeBron James is a lock to be named the 2013 NBA MVP. But the ballot is five-deep. Who else belongs in the conversation?

Share All sharing options for: Who belongs in NBA MVP conversation?

The NBA MVP award is a weird thing this year, because the choice for MVP is so obvious and clear-cut that all of the debate becomes about who else should fill out the ballot. In a way, that's fun: you can hear some really interesting cases for non-traditional choices at No. 4 and No. 5 without risking that he who deserves the award won't receive it. In other words: give Marc Gasol that No. 4 spot on the ballot, and it won't cost the rightful MVP his throne.

The problem is that MVP voting remains anonymous, so when David Lee gets a No. 5 nod, we'll have to guess who offered it up. (Totally Tim Kawakami. It's all been a ruse.) With transparency, sure, we'd spend a lot of time laughing about x writer giving y player a vote that the data and common sense indicates is absurd. But we'd also, perhaps, get to see more writers explaining their picks, making those cases. That's one of the benefits of new media, I think: the lack of space restrictions allows basketball writers of all strains flesh out their opinions. This is one of those areas where loquaciousness is warranted. I want to hear the effusive case for James Harden!

With all of that said, here is what my ballot would look like had a real ballot.

This is one of the picks that doesn't really need to be explained, as LeBron is having one of the greatest seasons in NBA history. The numbers: 27 points, eight rebounds and seven assists, 56 percent shooting from the floor, 40 percent on threes, a ridiculous .636 True Shooting mark, the second-longest winning streak in NBA history, one of the league's best records, stellar defense, some massive self-led comebacks ... the case is not negotiable. He's the best player in the league by far.

LeBron has won 19 of the past 32 Eastern Conference Player of the Month awards. Seems low.

Durant, meanwhile, is going to win his fourth consecutive scoring title. He's 24 years old and a more efficient scorer than even LeBron. To me, he's the only guy who can break LeBron's MVP streak (soon to be two and counting). Like LeBron, Durant plays for a spectacular team and has had some jawdropping nights. But also like LeBron, he's totally consistent. Durant's worst night is still pretty good. That's the mark of a truly valuable player. Inefficient high scorers (Russell Westbrook, for example) can lose you a game when they are off. Being so efficient makes those nights really rare, and means the worst that can happen is just a low volume of scoring here or there.

Durant also has the best assist rate of his career, has maintained solid rebounding and is locked in on defense (though without the impact on that end of a LeBron). Were it not for LeBron, we'd be talking about Durant as an MVP lock. Alas ...

I'm coming to terms with the fact that CP3 is never going to win an MVP despite being the most dominant point guard of the new point guard era. (Derrick Rose, who does have an MVP, could surpass him. So could Kyrie Irving or Greivis Vasquez. Maybe even John Wall or Norris Cole.) It's easy to say that CP3 is the best in the league at making the game easier for teammates -- LeBron and KD do that impeccably as well. But CP3 does it in a variety of ways, and I think that in particular is what creates so much value.

CP3 has the league's No. 2 assist rate behind Rajon Rondo, No. 2 offensive rating behind Tyson Chandler, No. 3 PER behind LeBron and KD and he's an impeccably efficient scorer (17 points per game on .596 True Shooting). On a team that struggles defensively, he's a muckraker, No. 2 in the league in steal rate (behind Ricky Rubio) and solid in the halfcourt. If only he could make his teammates a lot better on that end, the Clippers would be up there with the Thunder and Spurs atop the West.

Without LeBron or KD respectively, the Heat and Thunder would still be in the playoffs. I don't think you can say that about the Clippers without CP3. 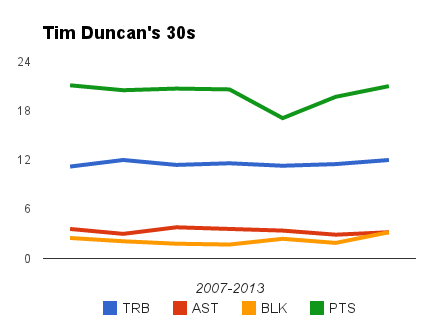 Needless to say, that's not normal. What's normal is the dip in scoring in 2011. Big Fun really dipped into the background, and it began to look like late 90s David Robinson was taking over Duncan's body. But last season Duncan bounced back -- thank the lockout? -- and this season he has legitimately been the NBA's best big man. He turns 37 in May. This is unbelievable.

Seeing Duncan and Kawhi Leonard run the team lately has been something else. This is the third generation of the Spurs youth that Duncan is anchoring. He's No. 4 in PER, an All-Defense candidate, one of the top rebounders and shotblockers in the league and also he's TIM DUNCAN. He deserves to be on first team All-NBA. At age 36. Amazing.

Speaking of old men, my No. 5 nod goes to Kobe. First, let's talk about the reason not to give Kobe the ballot spot: his defense. It's been ridiculously bad much of the year. While he can still get up and challenge opponents one on one, he has been among the Lakers' biggest defensive problems in terms of team resistance. He constantly leaves his man open to drift toward the ball, and that's a problem.

That said, he's still an extremely high volume shooter who is stunningly as efficient than he has ever been (.569 True Shooting) and is in the middle of his best assist rate performance ever. With injuries to Pau Gasol and Steve Nash and rampant offensive ineffectiveness by Dwight Howard, the offense has been primarily Kobe. And the offense is top-10 in the NBA. That's not nothing.

To pick Kobe I had to leave off a couple of guys it's worth mentioning. One is Carmelo Anthony. The Knicks are totally awesome, and 'Melo is playing better than ever. But here's the issue. Some folks thought he was top-10 before this season, and he wasn't, so they argue because he's improved he's got to be in the top-5 conversation. But if he was like borderline top-25 and he's improved -- and lots of other guys have improved or maintained too -- he doesn't necessarily need to be even top-10. I think he's around No. 7-8 on my extended non-existent ballot. He's been incredible. Other guys have been more incredible.

Tony Parker was the most difficult snub for me. At 20 points per game on efficient scoring and one of the best assist rates in the game, he's right behind CP3 on the point guard rankings. If Kobe hadn't had all of these 10-assist games, I probably would have put Parker in that spot. (Yep, two Spurs!) But alas.

I wouldn't seriously consider James Harden or Stephen Curry for the top five because of defense, but they are pretty clearly worthy of discussion. Brook Lopez is worth All-NBA consideration in my book, as is Al Horford. Roy Hibbert's disastrous few months on offense preclude consideration on the MVP ballot, but he might be an option at Defensive Player of the Year. Marc Gasol, however, is the top big man not in my top-5. He occupies the No. 7-8 spot that 'Melo does not. Russell Westbrook is in the mix for the top 10, as well.

And sorry, Bulls fans. No Derrick Rose for me this year either.