The New York Knicks have rediscovered themselves

Why have the Knicks won 12 in a row? Because they've finally rediscovered the style of play that made them so successful early in the season.

Share All sharing options for: The New York Knicks have rediscovered themselves

The New York Knicks have now won 12 games in a row after Sunday's surprising 125-120 triumph in Oklahoma City. Carmelo Anthony has become the talk of the league after yet another dominant scoring performance, and the vague optimism that the Knicks could go on a 2011 Mavericks-like surprise run through the playoffs has been rekindled.

We can discuss whether this run is sustainable later. The more operative question is why. Why have the Knicks become a juggernaut again? Why are they playing their best ball at the right time?

The simple answer: Anthony and J.R. Smith have been unbelievable recently. Anthony is averaging nearly 33 points a game with a true shooting percentage of 59 percent in his last 11 games, surging ahead of Kevin Durant in the race for the scoring title. Smith, meanwhile, is averaging nearly 24 points a game during the 12-game streak, showing his renewed aggression by getting to the line over seven and a half times a contest. When you have two players faring that well, it's easy to win.

But a more fundamental answer can be found as well. During this stretch, the Knicks have rediscovered their style.

Early in the season, the Knicks flummoxed offenses by playing a small lineup primarily featuring Anthony at power forward, spreading the floor and forcing teams to pick their poison. Using the scoring ability of Anthony, the pick-and-roll prowess of Tyson Chandler and proficient outside shooting, the Knicks made it impossible for teams to stop everything. Their offense thrived and they shot to the top of the league.

There have been a lot of speed bumps since. The reintegration of Amar'e Stoudemire set them back a bit, because his game was an awkward fit into this new style. Bringing Iman Shumpert back from injury also didn't pay immediate dividends because he was slow to get back to being himself. Raymond Felton's strong early play gave way to an injured finger that took a while to get over. Other injuries to backup big men slowed things as well, not to mention the issues with Anthony's knee. Through it all, the Knicks lost themselves, playing more conventionally and seeing their patchwork roster exposed.

But now, they're back to where they were in November. Stoudemire's injury, while unfortunate, removed the dilemma of having to find ways to fit him in. Felton is healthy and playing well. Anthony is healthy and playing spectacularly. Jason Kidd is rested after going through a nightmare shooting slump. Even Chris Copeland has emerged as a competent backup (more on this later).

The Knicks now play with at least four perimeter players at all times, and the results show. New York has scored an average of 118 points per 100 possessions during this 12-game run, a figure that would lead the league by 7.5 points/100 possessions if it held up all season. The small lineup allows the Knicks to have pristine spacing on all sets. There's almost no way to stop everything when the Knicks surround the perimeter the way they do.

You see this whenever the Knicks run pick and roll. On this play against Miami on Tuesday, Felton and Chandler run the play with Anthony spotting up on the same side. 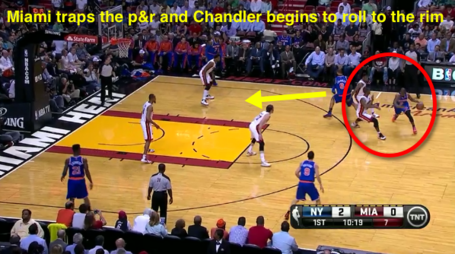 Miami, like many teams, traps the ball-handler to prevent him from getting into the lane, something Felton has done increasingly over this stretch. By doing that, though, the Heat put Udonis Haslem in a tough spot. Chandler rolls to the rim, and Haslem's natural instinct is to help off his man to prevent Felton from throwing the pass to Chandler for the dunk.

The problem? Haslem's man is the Knicks' best player and one of the few guys in the league that you should never leave open. 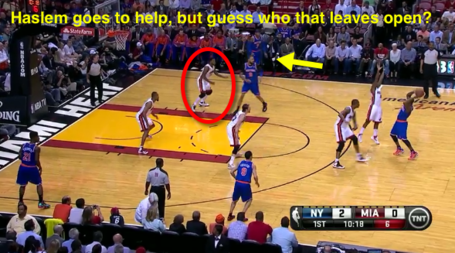 Haslem's not making a bad play, but this is the dilemma the Knicks' small lineup creates for defenses. All Felton has to do is hit the man Haslem doesn't guard. If Haslem stays with Anthony, Felton finds Chandler for the dunk. If Haslem helps to guard Chandler, as he does here, Felton has an easy pass to Anthony for three. 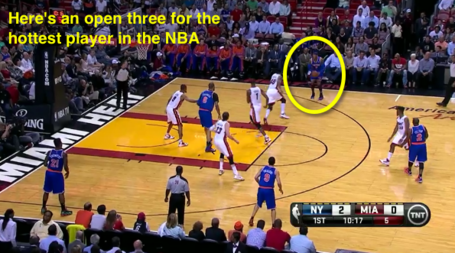 The same dilemma occurs on this set play against the Thunder. New York will run a dribble handoff for Felton, a play initiated when Pablo Prigioni screens Felton's man as Felton comes around. The Thunder elect to switch that screen, and Russell Westbrook actually anticipates the resulting pick and roll between Felton and Chandler relatively well at first. 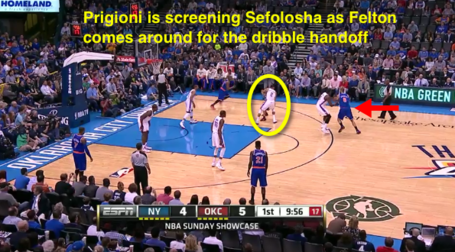 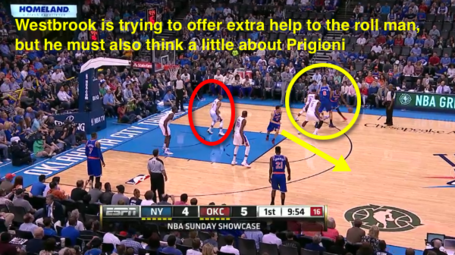 But while Westbrook is trying to cut off Chandler's roll to the basket, he still has to worry a little bit about Prigioni, a 38-percent shooter from distance despite his reluctant approach. Even if Prigioni doesn't shoot the open three he'd be given if Westbrook stayed put, his capabilities as a ball-handler and passer are dangerous enough, especially with Shumpert and Anthony perfectly spaced along the perimeter on the opposite side.

That little bit of concern is all the Knicks need. The instant Westbrook takes a step towards Prigioni, Felton whips the pass to Chandler for the dunk. 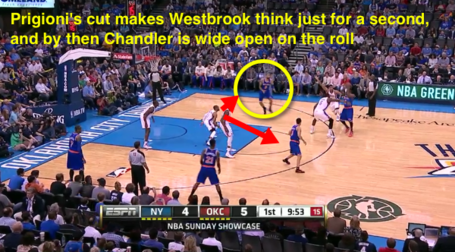 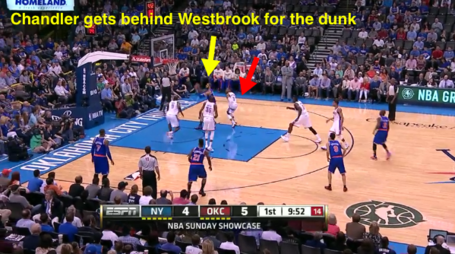 The Knicks have become so good at manipulating their spacing advantage that they can react to the smallest difference in a help defender's positioning. Take these two plays in the third quarter of Sunday's win. On the first play, Thabo Sefolosha will try to help plug Felton's dribble penetration while not straying too far from Smith on the opposite side. 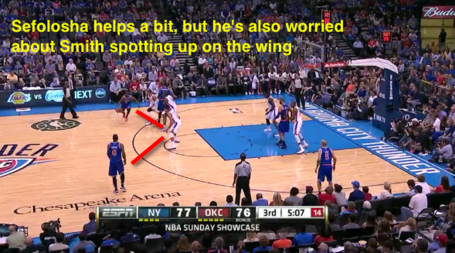 Sefolosha is right at the foul line, trying to guard two people at once. If a worse shooter were on the opposite side, he'd drift more towards Felton. As is, though, Felton reads the play and gets by Sefolosha going left for a floater. 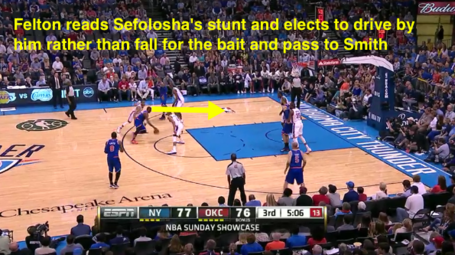 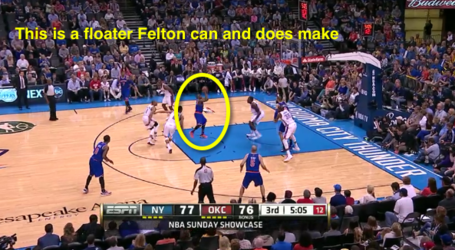 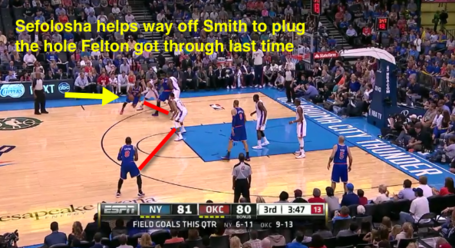 Watch how quickly the Knicks exploit that. 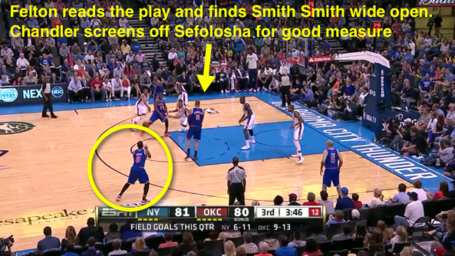 Felton simply drives and kicks, and Chandler screens off Sefolosha as he tries to recover, giving Smith an open three. All this because Sefolosha took just one more step over towards Felton than the previous possession. 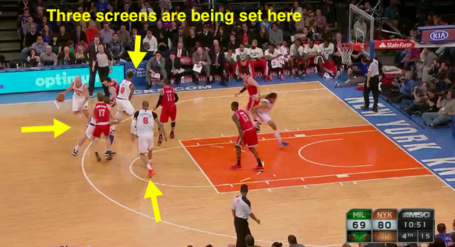 As the play develops, watch Ersan Ilyasova. He's tasked with being the last line of defense to prevent Chandler from rolling to the rim for a dunk, but he also has to worry about Copeland in the right corner. By positioning Copeland there, the Knicks force Ilyasova to choose between two bad situations. If he stays in the lane, he yields an open three to Copeland, who shoots 41 percent from beyond the arc. If he stands too close to Copeland, he risks opening the lane for Chandler to get a dunk. 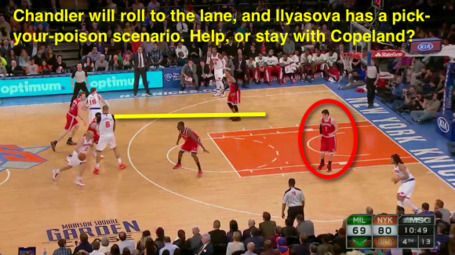 Ilyasova ultimately stays with Copeland. This is what results. 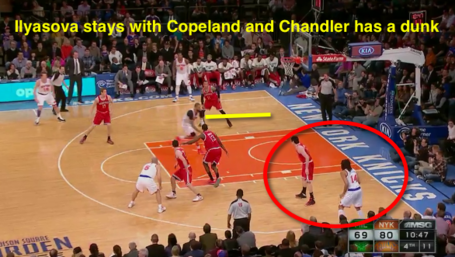 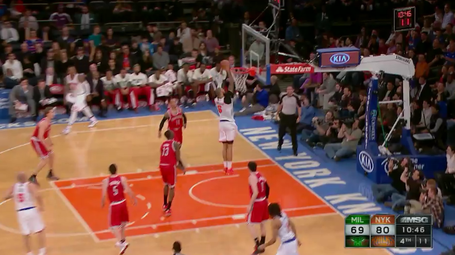 Here's that play in real time.

Here's another example on a HORNS set (more on what a HORNS set is here) from Sunday. Look at how open the paint is as Anthony catches the ball one step from the rim at the left elbow. 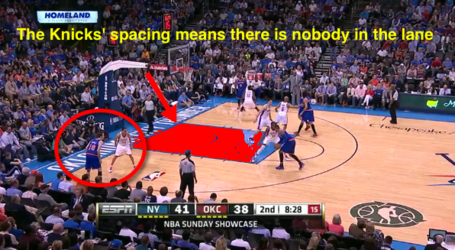 On one side, Kevin Martin is so concerned about leaving the deadly Steve Novak that he doesn't even bother to help. On the other side, the Knicks confuse Oklahoma City by pretending to run a double screen for the dangerous Smith. As all this is happening, Anthony takes one step to his left to get by Kevin Durant for the dunk. 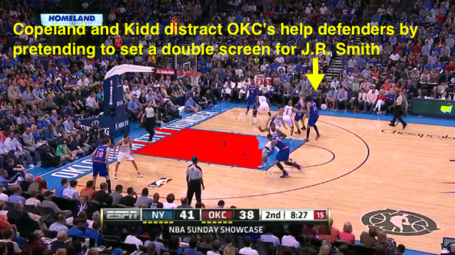 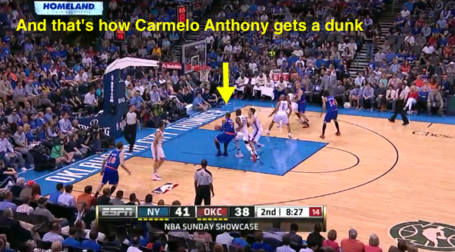 One last development to watch: the insertion of Copeland as the second-unit center in a five-man perimeter unit. While these lineups give up a lot defensively, they are even more impossible to guard because any one of the five players on the court can hit a three.

For example, what is Shavlik Randolph to do on this play? Against a normal lineup, Randolph's work shutting off the initial pick and roll would be enough. 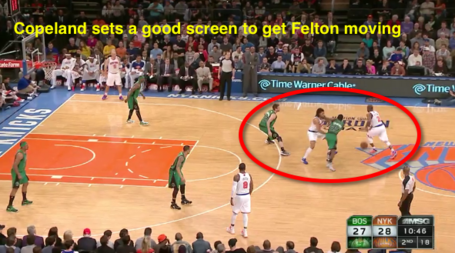 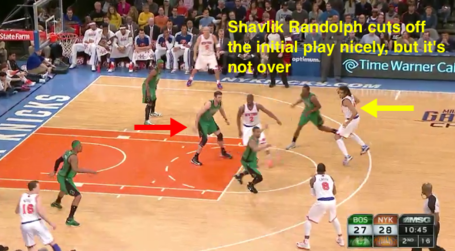 But because he's guarding Copeland, his work isn't over. Rather than go to the basket like most big men, Copeland sees Randolph trapped in the lane, steps back and receives the pass from Smith for a wide-open three.

There's also the flip side: the threat of Copeland freeing someone else up. On this play against the Bucks, Luc Richard Mbah a Moute is so worried about Copeland being open on a pick and pop that he leaves Smith, the man with the ball, way too early. 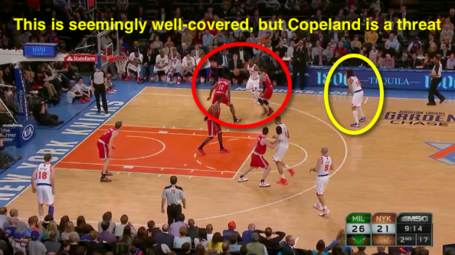 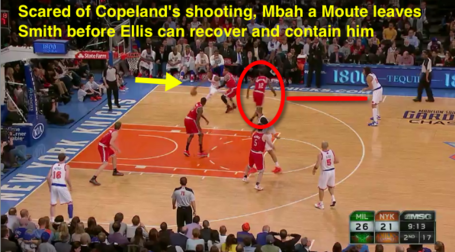 Smith gets a three-point play out of this, all thanks to the threat of Copeland. 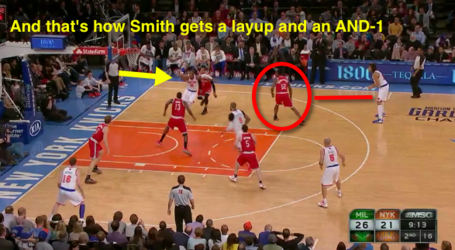 Whether Mike Woodson continues to give Copeland minutes remains to be seen, but it would be smart if he wants the Knicks to continue being themselves.

It's probably a longshot that the Knicks win a championship this way. Anthony and Smith will probably cool off at some point, and the Knicks may not have enough in reserve defensively to compensate.

But it's clear the Knicks are at their best when they play Anthony at power forward, downsize everywhere else and spread the floor with shooters. It may not be enough of an adjustment to get by Miami, but it's the only way the Knicks even have a chance.

That's why it's a huge development that the Knicks have rediscovered the style that was so successful early in the season. This might be the only way the Eastern Conference playoffs turn into something other than the Heat's warm-up exhibition before the NBA Finals.