The rise and fall of strikeout-to-walk ratios

Used to be there were numbers that used to mean something, consarnit. So here are a list of complaints.

Share All sharing options for: The rise and fall of strikeout-to-walk ratios

Jeff Samardzija struck out eight out of the first 11 Braves he faced on Sunday. Seven of the eight strikeouts were swinging. In the bottom of the second, he struck out Dan Uggla on a slider, Juan Francisco on a splitter, and Chris Johnson on a fastball. On a day when Stephen Strasburg, David Price, and Justin Verlander also pitched, it was Samardzija who had the best stuff of the day.

Which isn't to say that the strikeouts were why he lost. But it's a good way to point out the Braves' philosophy this year is that strikeouts aren't a big deal, and that's the kind of game that can convince you they're right. Jeff Sullivan looked into the correlation between strikeouts and runs, and didn't find much. Alex Remington points out that things might be different because we're in uncharted territory when it comes to the massive strikeout totals, but until the Braves show they're a historically freaky team, we'll just assume their strikeouts aren't that big of a deal when it comes to scoring runs.

There's an argument to be made that the increasing homer and strikeout levels are something of a blight on baseball (or that they will be if the trends keep up). Rob Neyer wrote about it last year, concluding thusly:

But what makes baseball so interesting is the variety of things that might happen. For every strikeout you add, you subtract something from that wide variety. And I think we might wind up missing those somethings, if we're not careful.

Lee Panas at Tiger Tales added to the discussion with a post of his own, including some nifty graphs. And, yep, strikeouts are sure going up. If these trends continue, every hitter in 2040 is going to be a variation on the same Rob Deer-inspired theme.

One graph that I'll add is the history of league batting averages since 1901: 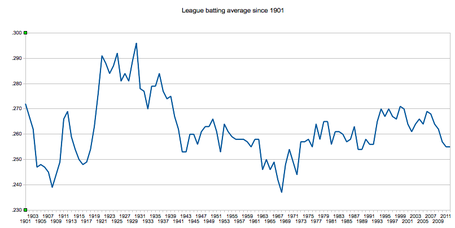 More hitters are swinging and missing. More hitters are hitting home runs. But the swing-from-the-heels approach isn't necessarily leading to a low-average, high-slugging league. Players are still getting their hits, at least in a manner that's consistent with the game's post-1968 history. The hits tend to go farther, but it's not like the league is Mark Reynolds now, and Mark Reynolds is the league.

I don't have an aesthetic argument against the trend. Not yet. I don't watch baseball and get antsy when a pitcher has a high-strikeout game. And I still enjoy a tater or three, even if my personal preferences favor the pitcher's duel. But here's my problem with the increase in strikeouts, and it's a purely selfish one: I don't know how to evaluate pitchers like Samardzija anymore. More specifically, I don't know how to evaluate pitchers anymore.

See, I'm not a big stats guy. I appreciate their importance, and I'm grateful that other people are smart enough to do the heavy lifting for me. But I don't have a math brain. Every time I attempt to bring statistical analysis into an article, I'm terrified I'm making a fool of myself. But there was always one beautiful fallback when it came to pitchers. Don't worry about the FIP, the xFIP, or the PITCHf/x, I'd tell myself. Just worry about the strikeout-to-walk ratio. It was my favorite state. Elegant, descriptive, predictive … and easy enough for a silly person like me to understand.

It's not an irrelevant stat yet, but it's not a magic number anymore, dang it.

It used to be. Certainly in the old days. Between 1914 and 1956, there wasn't a single starting pitcher who a) struck out three batters for every walk he issued, and b) had an adjusted ERA below the league average. There were a handful of them in the '60s, peaking with three pitchers doing it in 1968. But there wasn't anyone who did it in the '70s, and the '80s saw just six.

Now it's a regular thing. Just under half of the seasons from pitchers with an ERA+ under 100 and a strikeout-to-walk ratio over three have happened since 2000. There are about four every year, now. Joe Blanton's strikeout-to-walk ratio in 2012 was the highest for a pitcher with an adjusted ERA under the league average since Cy Young in 1906. It used to be that non-statheads could take a season like that and assumed Blanton was supremely unlucky. Now it's not that simple. A pitcher with a gaudy K/BB ratios isn't necessarily anything other than a sign of the times.

And that's just with the outliers. What about the pitchers with a respectable strikeout rate? I used to know how to eyeball the guys with seven strikeouts per nine innings, especially if their walk rate was low, too. Now, I have no idea.

Dan Straily struck out 11 Astros on Saturday. Should I be impressed? Will Dan Haren be alright, or are his strikeout and walk totals obscuring a larger truth? Tim Lincecum was fourth in the National League in strikeouts per nine innings last year. Does that augur well for his future? Seems like that should be a sign that he still has good, hard-to-hit stuff, but now I'm not so sure.

Maybe. Maybe not. Maybe Jeff Samardzija is the best Cubs pitcher since Kerry Wood, and he's about to break out. Or maybe hitters don't care so much when they miss his pitches by six feet.

So swing away, Dan Uggla. Assume that it's 1860 and the slide-ball isn't in regular use, Justin Upton. Do your thing and do it well. Just know that you've taken away a baseball writer's favorite statistical crutch. I'm not sure if I'll get over this one soon.

Also, I don't know how, but it feels like this is Yusmerio Petit's fault.