The day I met Jackie Robinson

Share All sharing options for: The day I met Jackie Robinson

The essay below comes to Baseball Nation via Dr. Raphael K. Levine ...

In the winter of 1951, when I was still a young fellow, my parents rewarded me and my younger sister, Ruth, with a vacation in Miami, and we drove to Florida from our home in New York. En route to Miami, my father acceded to my urgings and agreed to stop in Vero Beach, Florida, spring-training home of the Brooklyn Dodgers. The previous fall, the Dodgers had lost the National League pennant on the last day of the season; the next fall, they would again lose the pennant on the last day of the season.

Back in '51, spring training wasn't anything like it's become, so we had no difficulty in driving right into Dodgertown and moving about without any restrictions at all. There were players walking around, many of whom I recognized as Dodger stars. But none seemed willing to stop for a moment and sign an autograph, or engage in conversation. Still, I was thrilled to be there, and my parents indulged my wishes to romp about the grounds. 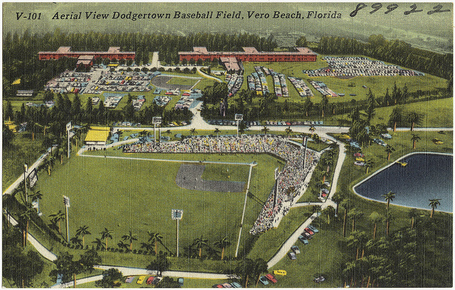 I will never forget the moment when I spotted Jackie Robinson, dressed in street clothes and making his way toward one of the camp's buildings. As I had done with the other players, I ran over to him, shaking and nervous, just hoping for a smile and maybe an autograph. To my amazement, Jackie stopped in his tracks, asked my name and where I was from, and asked me to introduce him to my sister and parents.

With those pleasantries concluded, Jackie took our hands and walked me and Ruth inside a room that I immediately realized must be the Dodgers' clubhouse. There, I readily identified Preacher Roe, Don Newcombe, Pee Wee Reese and other Dodger players sitting and talking, some of them playing cards. We spent a moment or two with each, shyly introducing ourselves. We even had the courage -- with Jackie's encouragement -- to joke a bit with Cal Abrams about his unfortunate experience in that last game of the previous season.

Finally we left the clubhouse ... but Jackie wasn't finished with us. Still holding our hands, he led us on a personal tour of the training grounds, with Jackie telling us about the different fields, how the games and practices were scheduled, and where the players were housed and fed. I can still feel the delight I experienced when Jackie brought us to a juice machine -- usually used to keep the players hydrated in the Florida heat -- and poured me and Ruth each a cup of orange juice.

We spent nearly an hour with Jackie, and he seemed as interested in our lives as we were in his. When I told him I wanted to be a sportscaster when I grew up, he gently advised me to keep my options open, because I might someday find greater fulfillment in directions other than sports. When it was time to leave, Jackie suggested that we all get together for a picture. He seemed genuinely sorry that we had to go, and we felt we'd made a dear and sincere friend.

I have never forgotten Jackie's goodness, his grace, and his respect for my family. I was then too young to appreciate the personal tribulations that he'd gone through just a few years earlier. As time has gone by, my respect and admiration for that man have only deepened. This photo of Jackie flanked by me and Ruthie, as clear as ever, remains one of my most prized possessions ... 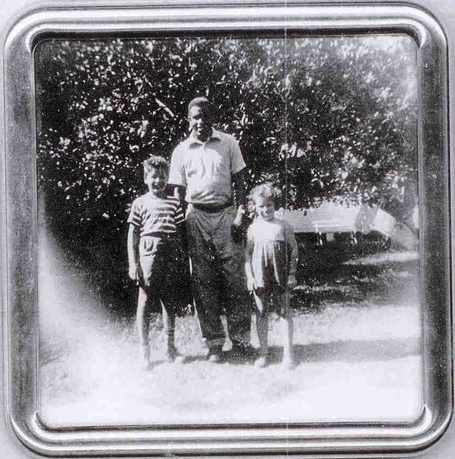 After graduating from Jefferson Medical College in Philadelphia and completing an internship at Beth Israel Hospital in New York City, Dr. Raphael K. Levine served in the U.S. Navy for three years during the Vietnam War as a medical officer. He left the Navy as a Lieutenant Commander and went on to an orthopedic-surgery residency at Columbia-Presbyterian in New York, where he remained on the medical-school faculty for 15 years while practicing orthopedics privately in Westwood, New Jersey. Dr. Levine continues to practice in Westwood. He and his wife, Letha, live in Englewood, N.J. and are blessed with five children and multiple grandchildren.

Our sincerest thanks to Dr. Levine, and to Joshua Prager for connecting us with Dr. Levine.