Kevin Ware and Louisville Cardinals cut down the nets

Louisville won the national championship and now they get to cut down the nets. Check out the Cardinals putting the finishing touches on the NCAA title.

Share All sharing options for: Kevin Ware and Louisville Cardinals cut down the nets

The Louisville Cardinals took down the Michigan Wolverines to win the NCAA National Championship on Tuesday night. And of course, the final tradition of winning the title is cutting down the nets. 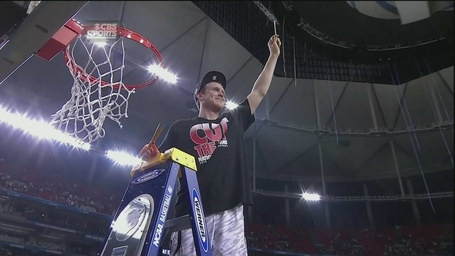 After all of the Louisville players cut down their portion of the nets, the NCAA lowered down the hoop for Kevin Ware to participate in the post game ceremony. Ware suffered a horrific leg injury earlier in the tournament in Louisville's win against the Duke Blue Devils but provided inspiration and motivation for his teammates as they cruised towards a national title.

This really is a heartwarming scene. After all of the insane basketball highlights and intensity are gone, there is still just plain human emotion. And that's a big part of why we love sports so much. You have to respect the poise that Louisville maintained as one of their players went down with a terrible injury. Everything about this story is great. 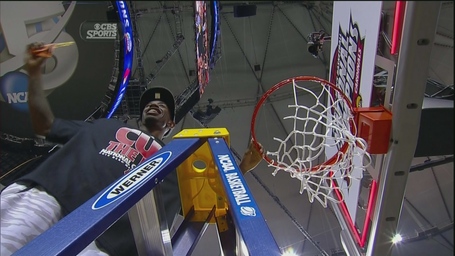