In the olden times, you were sort of stuck watching just one game, and if something happened in a different game, you could just hope to see the highlight later on SportsCenter.

Like I said, that was the olden times. Now, thanks to Twitter, as long as you've got an eye on Twitter you know everything that happens, within about five seconds after it happens. Monday night, Joe Nathan earned his 300th career save. Which wouldn't actually have been big news, except for maybe in the Metroplex. What made it big news -- on the Twitter machine, anyway -- was how he got his 300th save ...

#Rays lose on a horribly called strike 3 on a shocked Zobrist. Maddon has been arguing vehemently after the fact as field cleared

Tom Grieve is desperately trying to say that pitch was "close" or "borderline." It wasn't.One of the worst called strike calls you'll see.

Eric Gregg would be embarrassed with that third strike call on Zobrist.

What made this all the more entertaining, of course, is that Ben Zobrist's manager is one of the very few managers -- actually, I think now he's the only manager -- who occasionally favors us with a tweet.

That can't happen in a major league game.

Okay, so far this doesn't look real good for plate-umpire Marty Foster. But what did the pitch actually look like? Here's the palest representation, from MLB.com's GameDay: 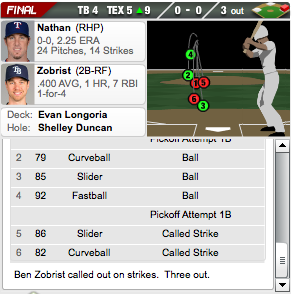 It looks like the third pitch could have been called a strike, but wasn't, and that the fifth pitch might have been called a ball, but wasn't. You'll notice, too, that Joe Nathan didn't throw anything near the heart of the strike zone. Major-league pitchers do make mistakes. But not many, and that goes double for the best pitchers.

Anyway, that sixth pitch is the one everybody's so upset about, and it sure looks a few inches outside here. You have to figure that GameDay's got a margin of error of a few inches, though, right? And remember that just about everything you're going to see on the Web is essentially two-dimensional, when the actual strike zone is highly three-dimensional.

You want to see what it looked like on TV, though? Here you go ... and hey, that's nowhere close to Eric Gregg's worst.

Now, I know you guys are going to think I'm just being a contrarian asshole again, but I gotta say ... I can imagine that pitch clipping the very corner of the strike zone. I mean, sometimes a pitcher just throws a perfect pitch, even if nobody but the umpire and the catcher can believe it.

And if so, great job Mr. Umpire!

HP ump Marty Foster on call to end #Rays game: "Had I had a chance to do it again I wouldn't call that pitch a strike.''

Oh. They used to teach umpires to sell the call, and then stick with it as long as possible. I will argue that nobody was going to find any great evidence that Foster absolutely blew this one. Now that he's admitted it, though? Hell, bring on the damn robots.

For more about the Rays and their favorite umpire, please visit SB Nation's DRaysBay.