The Rays, Marty Foster, and the human element

Marty Foster made a career-defining call on Monday, and 97 percent of baseball fans are giddier for it.

Share All sharing options for: The Rays, Marty Foster, and the human element

So a baseball writer walks into a bar, and there are two patrons, a bartender, and a TV playing SportsCenter. At the bottom of the screen, these are the first words that crawl across:

"Had I had the chance to do it again, I wouldn't call that pitch a strike."

Just a quote. No context. This really happened to me -- this surreal moment of "Whoa. Guess someone really screwed up." You know it's big when an umpire admits he's wrong. The immediate parallel is the James Joyce/Armando Galarraga game. Joyce knew he messed up, and he asked for forgiveness. Anything less than that, and umpires don't cop to anything.

So it had to be a monumental mistake. A Jeffrey Maier situation influencing a four-homer game. A batter asking for time six seconds before the last pitch and not getting it. A falcon prying the bat from a batter's hands and pecking him until the batter screams, "Please, stop the game. Please halt the action of the game. This needs to be addressed."

It was even worse. A GIF of the call:

And here's what GameDay has to say: 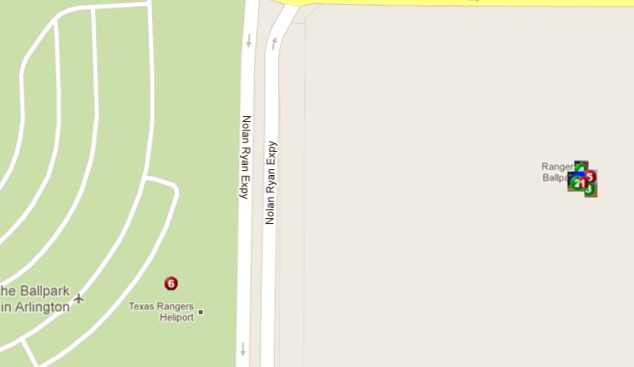 Or, if you want to see the real call:

Here's what can compete with the Joyce/Galarraga call: It either has to be something of equal significance, or one of the worst calls you'll ever see. We made fun of Angel Hernandez for a bad call in the ninth inning of a WBC game; this is magnitudes worse. It was the last pitch of the game, and this wasn't the Astros and Cubs. There's a good chance these two teams will be fighting for the same playoff spot in the fall. And it was the worst strike call you might ever see.

To be fair, it wasn't that egregious when it crossed the plate: 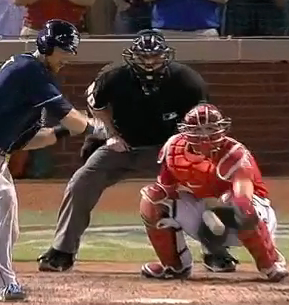 But it wasn't especially close. And in that still, you'll notice an umpire with his head pointed down, staring directly at the center of the plate as a baseball sails around it.

Here's the thing, though. I've typed 400 words, and I've watched the video six times, calling my wife over to watch the bad man make a bad call. And I don't remember the last time I had this much fun watching a baseball highlight. The Will Middlebrooks homers last weekend? Say, that was neat. But I forgot about them by the time Mad Men was on.

If you're a Rays fan, please, accept my sympathies because that is one of the worst calls I've seen in years, if ever. Even if the odds are good that the Rangers were still going to win the game -- first and second with two outs still favors the team with the lead -- that's a horrible way to lose a game.

For anyone who isn't a Rays fan, though, this is a total blast. Look at how bad that call was! Listen to the announcers all react as if it's ball four! See Joe Maddon freak out! It's April 9, and this might be the funniest story of the year.

It's almost like we're all playing credit-card roulette with 29 other people and a gigantic dinner tab. Someone's going to lose. And it's going to suuuuuck. But the other 29 people are going to have a good chuckle at the loser's misfortune. The odds are eventually going to even out. Just not right now.

It's at this point that I realize that I'm rooting for The Human Element -- an unpopular stance among the Internet types. I would miss bad calls if they went away, dang it. Clearly the Cardinals fans have a right to spit and make the sign of the cross when they hear Don Denkinger's name. But doesn't that add to the story? For instance, here's the shorthand of being a Cardinals fan: Jeff Weaver pitching his brains out, Game 6 and David Freese, Don Denkinger blowing a call, Stan the Man, and Ozzie Smith doing backflips out to the infield.

If you take Denkinger out, it still means something. That's the argument against The Human Element. And it's an excellent argument. The game would thrive without blown calls. Instead of credit-card roulette, everyone would split the bill like a bunch of danged adults.

When you see a call like this, though, isn't it amazing? I can't pin down exactly what makes it so fun. Nor can I explain the evolutionary advantage an ape gained seven million years ago by watching someone do something terrible at his job. But blown calls can be kind of fun. I'm in. So long as it isn't my team. Which is the point. This is baseball, and you're entertained. That's all you ever asked.