Did the Denver Nuggets commit 'dirty' plays on Stephen Curry? A complete analysis

Do Mark Jackson's claims that the Denver Nuggets "tried to send hit men" to attack Stephen Curry in Tuesday's Game 5 have any validity. We go to the tape to find out.

Share All sharing options for: Did the Denver Nuggets commit 'dirty' plays on Stephen Curry? A complete analysis

Mark Jackson's declaration that the Denver Nuggets "tried to send hit men" on Stephen Curry was both accurate and questionable. These are not contradictions. In order to judge Jackson's comments, we must answer two fundamental questions:

1. Did the Nuggets do anything out of the ordinary with Curry?

2. If so, how do we classify those actions? Are they in any way justifiable? Is Jackson's own team engaging in similar behavior, as the Nuggets allege?

OK, so that's four questions. (There's also a fifth: was this the appropriate tone and timing for such comments, especially the ones where Jackson implied there was a mole telling him of the Nuggets' plans). But in order to even get to Part II, we must first answer Part I.

Are Jackson's comments coming from a legitimate place, or is he concocting them out of thin air?

I re-watched the entire game late Tuesday night, focusing only on Curry. From the opening tip, it was clear: the Nuggets were doing something coordinated, beyond normal defensive maneuvers, to throw Curry off his rhythm. That something could go anywhere on the spectrum between "physical" and "dirty" play, but we must accept that it belongs in the first place. And the effort most definitely centered around Kenneth Faried.

MORE ON THE GAME: Golden State of Mind Denver Stiffs

This video contains seven plays in the first half of the game where I think one can at least discuss whether Faried is doing something deliberately to target Curry.

Here's a closer look at those seven plays: 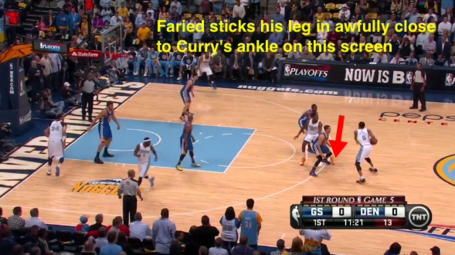 This is the second play of the game. The Nuggets have Faried screen Curry, and on his screen, Faried plants his foot near Curry's left angle before slipping the pick. He doesn't quite make contact with Curry's ankle, but the foot positioning is enough to be a bit suspicious. It's worth noting that proper positioning calls for one to plant like Faried and push off, so perhaps this is a coincidence. 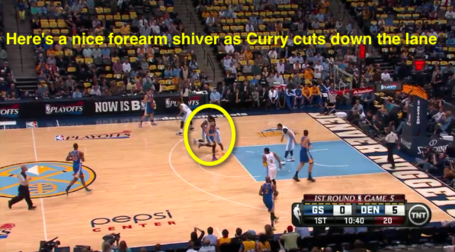 This was definitely a message-sender. Come down the lane, and you will be punished. Whether this play is "dirty" or just the kind of physical play you see in the playoffs depends on your perspective, but it was definitely deliberate. 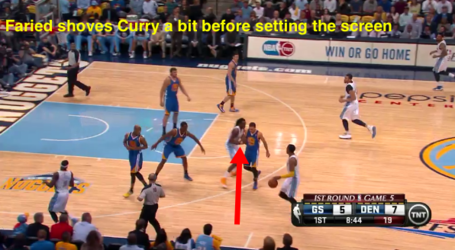 This is pretty minor to me. Before setting a legal screen, Faried gave Curry a two-handed shove up top. I don't think this is anything worth complaining about. 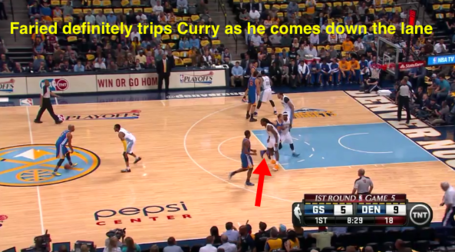 This is the play that Mark Jackson referred to specifically in his postgame press conference:

"I'm not going to get into specifics. You can take a look at the game. The screen on Curry by the foul line on a shot at his ankle clearly. That can't be debated," Jackson said.

Looking at the tape, I agree with Jackson. Curry is making another cut down the lane, but rather than shove him using his body, Faried sneakily sticks his right leg out and trips Curry successfully. A foul is called, but that doesn't excuse the action. Of all the seven plays noted in that video, this one comes closest to being "dirty." 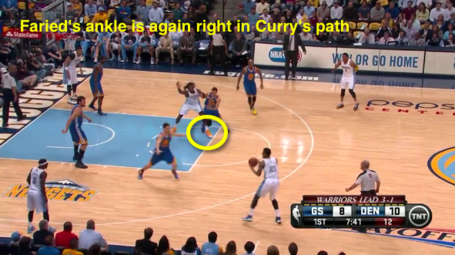 As Curry is in the middle of a zone, Faried tries to create separation by sticking his foot in Curry's path, then giving him a bit of a shove. Curry, annoyed by being bumped around all game, eventually responds by shoving Faried and being called for a foul.

I don't think this one's much of anything. Faried's trying to carve out position, and you want to plant your foot near a defender's to shield him off. 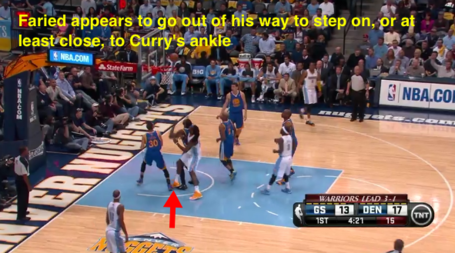 Here's an example of Faried rushing in for a rebound, stopping for a beat, then sticking his right foot out between Curry and Festus Ezeli. It's one of those tricky things to classify because Faried does it so fluidly. Is he trying to plant for ideal rebounding positioning, or is he trying to step on one of their ankles? This one's probably too close to call for me. 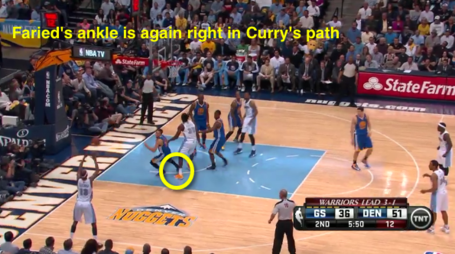 This is a similar play to the one above it. Faried is going in for an offensive rebound, and as part of that move, he slides just a little bit into Curry trying to close out on Corey Brewer. I'd say this play is more benign than the previous one, but both are too close to cal.

1. How do we classify those actions?

Your adjective probably depends on your point of view. Me? I'd call these "deliberate message-senders." Whether condoned by the Nuggets coaching staff or not, they fit into a larger gameplan: go at Curry whenever possible, play him physically and tire him out so that he doesn't have the energy to rain three-pointers. In accordance with this plan, the Nuggets attacked him when they had the ball. They played lineups that forced Curry to guard Andre Iguodala in the post, and they then went right at that mismatch. They made sure the specific cutter they sent through to initiate many sets was Curry's man. They had others, including Iguodala and Kosta Koufos, bump Curry whenever possible. Etc.

These series of plays are the logical extension of that. Were they dirty? I'd say the ankle trip that Jackson referred to probably is, while the rest are somewhere between coincidental and on purpose. They definitely don't compare to the "physical" play of past eras of the league, which was pointed out repeatedly by TNT's analysts. But then again, nothing does. By this era's standard, it's enough to at least make Jackson's comments come from a reasonable place.

2. Are they in any way justifiable?

Here, I'd defer to the overall gameplan. The Nuggets knew they could not let Curry get as comfortable as he did in Games 3 and 4, and they hoped that physical play would throw him off his rhythm. In the grand scheme of things, they succeeded. Curry had 15 points on 19 shots and went just 1-7 from downtown. Whether they could have done that without some of the extracurricular activities shown above is an open question.

We must also consider that it's in Jackson's best long-term interest for the Nuggets' actions to be seen as dirty. His comments come from a reasonable place, but they were also calculated as heck. It is wrong for us to accept them at face value without considering the obvious benefit they have for his team. Those words will plant doubt in the official's mind and help ensure that Curry won't have to deal with physical play that clearly throws him off.

That's why I'd use the phrase "deliberate message-senders" rather than "dirty plays." The former constitutes a blurry line. The latter suggests the line was crossed.

3. Did the Warriors do this stuff too?

It depends on what "this stuff" is. We know they were physical in Game 5 because Andrew Bogut and Draymond Green were called for justifiable flagrant fouls in the game. Here's the Bogut one, which was clearly a deliberate shove.

Those were actions that were caught, but was ere there anything the Warriors did earlier in the series that wasn't? Faried said yes:

"They play dirty every night," he said. "They have targeted me."

Does he have a point? It depends on semantics, but it is absolutely true that the Warriors have tried to keep him off the offensive glass by shoving him in ways that probably aren't legal. Here are just a few examples from the first four minutes of Game 4. 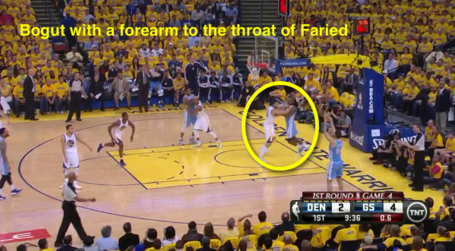 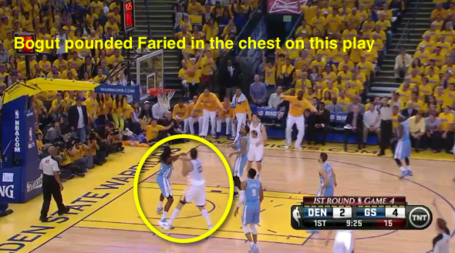 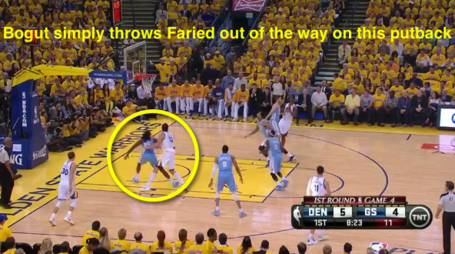 You may feel that there's a difference between attempting to trip a guard repeatedly and being physical in ways that blur the line to keep an elite offensive rebounder off the glass. I'm not sure I agree, but I'll concede that it's an arguable point. Regardless, Faried's comments are coming from just as legitimate of a place as Jackson's.

I suppose this is a long-winded way of saying that the definition of whatever the Nuggets did depends on your worldview. But I think two things are clear:

In other words: these are things that happen often in playoff series. Game 6 should be interesting.