The rise of the four-strikeout inning

Share All sharing options for: The rise of the four-strikeout inning

That screen shot is the poster for Padres: The Movie, which will gross three dollars on opening weekend. The scoring-a-run part is super-rare, but don't sleep on just how rare it is to strike out four hitters in one inning, either. The feat has been accomplished just 66 times in major-league history -- about once for every 3,100 games.

But there's something of an asterisk with those numbers. Behold the rise of the four-strikeout inning: 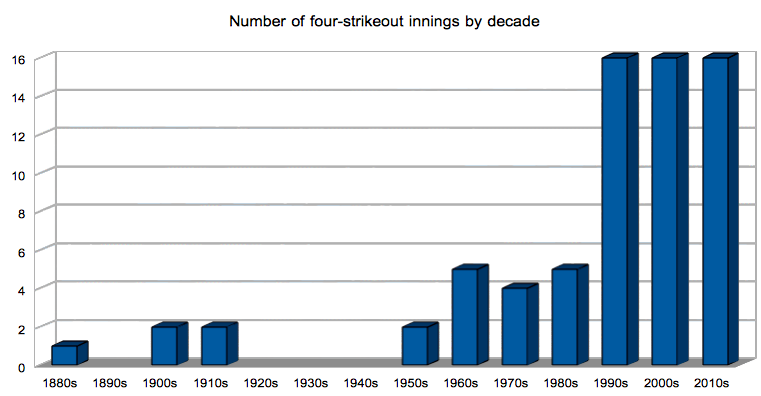 The reason for the increase? Could be anything. Not going to pretend like it's the definitive answer, but if you put that chart up there against the rise in global temperatures, it matches up pretty well. Enough to make you think!

Or maybe it has to do with the rising strikeout rate.

It's probably the rising strikeout rate.

Whereas once it was typical for teams to average two our three strikeouts per game, now they're averaging at least seven or eight, and the trend isn't slowing down. One of the effects, then, is a preponderance of four-strikeout innings. What was once a once-a-decade event is now something that happens at least a couple of times every year.

It appears that we're in the middle of some unintended consequences. The real effect of the rising strikeout rate isn't just some aesthetic shift in how the game is played. There have already been more 10-strikeout/no-walk performances in 2013 than there were in 1993, for example.

To which the response might be, "So?" It makes it harder to recognize which young flamethrowers are the real heirs apparent to, say, Dwight Gooden (whose K/9 in his iconic 1985 season was lower than Bud Norris's last year), but other than historical comparisons and quirky things like the rise of the four-strikeout inning, it shouldn't make that much of a difference, right?

I'm not so convinced. You all know about this one: 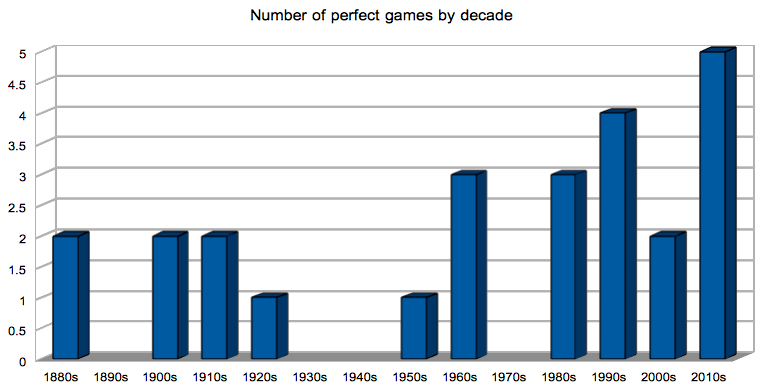 And while it might just be confirmation bias, it seems like there's a new threat every weekend. Shelby Miller allowed one baserunner on Friday, and Adam Wainwright didn't allow another one until the fifth inning in the next game. The Rockies went 15 innings without a hit. Yu Darvish was an out away from a perfect game in April, Chris Sale took a perfect game into the seventh over the weekend ... again, maybe the perfect games and near misses are a statistical fluke. But they probably have to do with balls that aren't put into play.

Baseball is a delicate ecosystem, and strikeouts are getting it on and multiplying like cane toads. Changes are a-comin' if the rates don't slow down. The changes are probably already here.

Unlike Rob, I don't think there's a huge aesthetic difference when it comes to a high-strikeout league and its low-strikeout predecessors. More strikeouts aren't better or worse; they just are. With them, though, there will be Easter eggs we weren't expecting. The rise of the four-strikeout inning is one of them.

And considering how much fun four-strikeout innings are -- and how much fun we have when pitchers go nuts with strikeouts in general -- I think the world can handle more of them. Just a reminder, though, that if hitters don't stop striking out, there will be more unintended consequences. We won't know what they are until they get here.

• The worst baseball writing of the month