How many coaches have the guts to sit a top-10 player of all time in a tight stretch of the fourth quarter of a closeout playoff game on the road? Gregg Popovich and ... well, who else?

We know Popovich treats everyone the same on his roster, but his decision to plant Tim Duncan on the bench with four and a half minutes to go in Thursday's 94-82 win over the Golden State Warriors was gutsy even by his standards. It was so surprising that ESPN's Mike Breen and Jeff Van Gundy initially speculated that Duncan was merely getting a quick rest. But Duncan never returned to the game, and the Spurs flicked off Golden State's final push with a 17-7 closing spurt to win the series.

Afterwards, Popovich would not elaborate on his reasoning, simply saying "I made that choice" when asked. But there was definitely something to it, and rewatching the tape of critical fourth-quarter possessions puts it on full display. What follows is our best attempt to crawl into the mind of Popovich and explain why the Spurs were so much more successful in the fourth quarter with Duncan on the sidelines.

First, it's worth noting that Popovich's decision was made easier by Tiago Splitter's splendid play earlier in the game. The Spurs' other big man finished with 14 points on eight shots, along with excellent pick-and-roll defense. The Spurs' prior best stretch of the game came when Duncan was sitting in the late-first and early-second quarters, when lineups featuring Splitter, three guards and either Boris Diaw or Matt Bonner outscored the Warriors by seven points in about eight and a half minutes. A similar lineup with Splitter in and Duncan sitting early in the fourth quarter also held its own as the Warriors began to rally. This was as much about Splitter's success as Duncan's failures.

Nevertheless, there were issues with Duncan once he returned to the game with just over nine minutes to go. His lack of mobility stepping out to contest and rotate the pick-and-roll -- a shortcoming the Warriors exposed often during the series -- was on full display, allowing the Warriors to get good looks from the perimeter.

Duncan failed to properly position himself repeatedly in that fourth quarter. The Spurs started the quarter by trapping the ball, but Duncan was slow making the second rotation to contest the roll man's jumper. David Lee missed both of these shots, but he had far too much room. 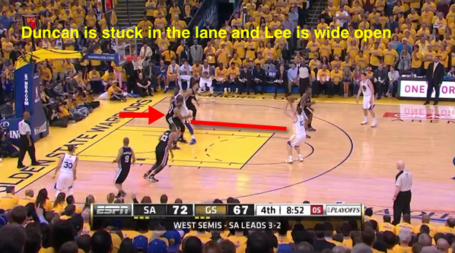 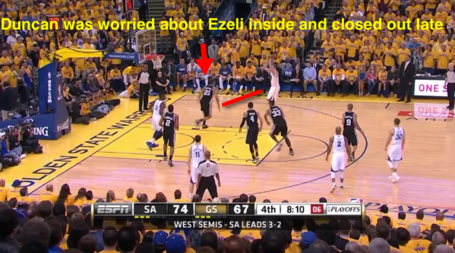 Contrast that to Splitter's contest from earlier in the fourth quarter when Duncan was getting a breather. 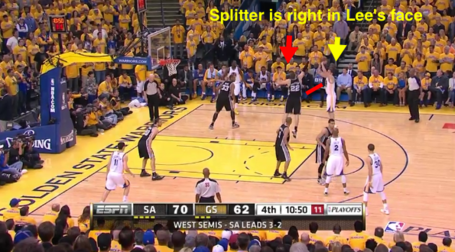 Lee made the shot against Splitter and missed both against Duncan, but Popovich probably looked at process over results. Lee's jumper over Splitter was properly contested. Lee's jumpers over Duncan weren't.

More importantly, Duncan had issues as the primary big man defender in pick-and-roll situations. Sometimes, he hung too far back in the lane, yielding open jumpers for the Warriors' sharp-shooting guards. Look at how far back he was on this Jarrett Jack jumper. 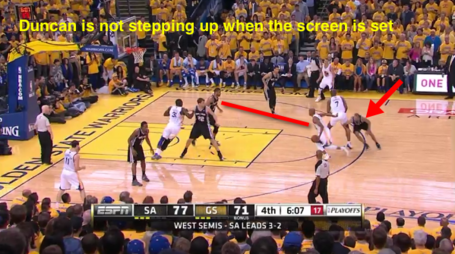 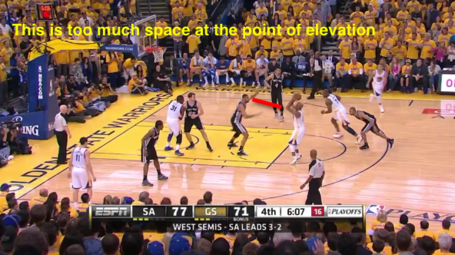 Jack missed, but you're playing with fire if you let him get that good a look from his mid-range sweet spot. Again: Popovich probably noted process over results.

When Duncan wasn't hanging too far back, he was coming out too far and getting beat off the dribble. Here, he lunges off-balanced at Stephen Curry, allowing Curry to sneak around him and set up Lee for a critical three-point play. Notice how upright his stance is as he comes out high to account for Curry's shooting ability. 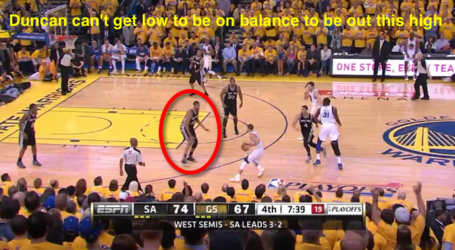 This allows Curry to freeze Duncan with a hesitation dribble to get into the lane. 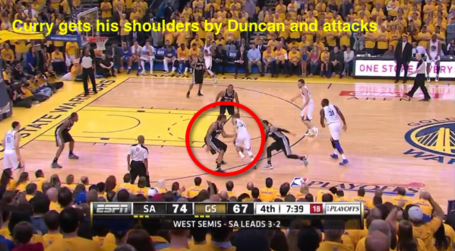 Curry eventually draws Boris Diaw and dumps it off to Lee, Diaw's man, for a three-point play. All this happened because of Duncan's lack of mobility. 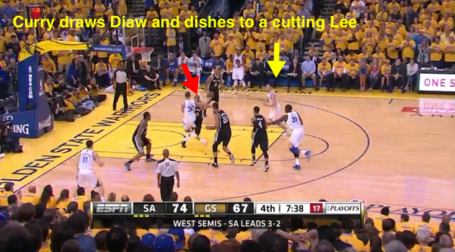 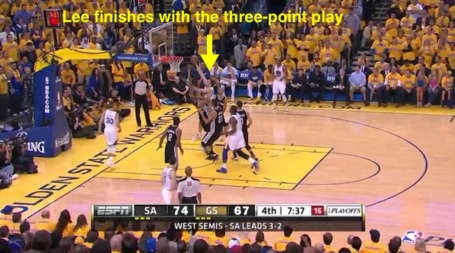 Here's video of the sequence.

Duncan also got caught on this play involving Jack and Carl Landry. While Duncan helped contain the initial threat, he was too slow to recover to cut off Landry's roll to the basket once Parker recovered. 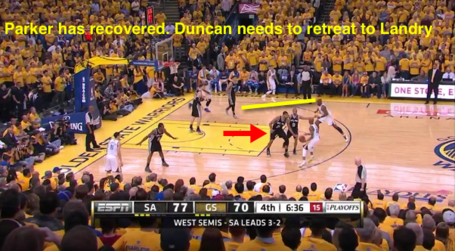 Landry therefore gets a free lane to the rim and draws a foul on Splitter. 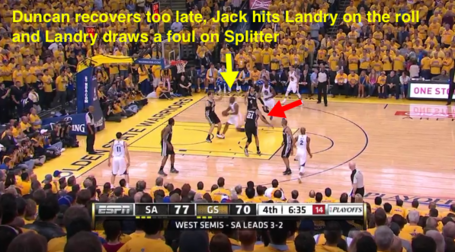 Here's that play in real time.

The straw that broke Popovich's back, though, was Duncan's late hedge on Curry as he came off a screen for an open 18-foot jumper. Here, we're talking a matter of inches. Duncan was juuuuust a bit slow, and that allowed Curry to get his shot off with enough room to spare. 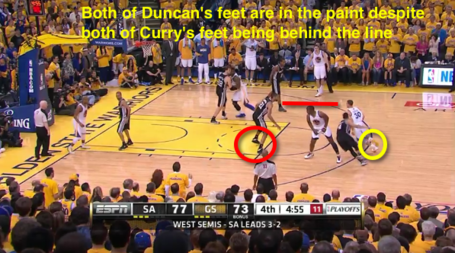 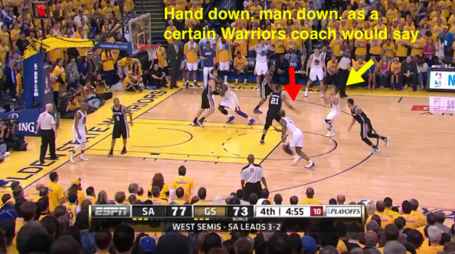 This pulled the Warriors within two and was the last possession of Duncan's game. Here's video of the sequence.

To the naked eye, this looks like a great shot by Curry, but it was aided by Duncan being just a touch out of position. Popovich noticed that and sat Duncan so the Warriors would stop targeting him in pick-and-rolls. Golden State had no choice but to run plays at Splitter and hope he, too, was a step late.

As it turned out, though, Splitter wasn't. Notice the slight difference in positioning between Splitter and Duncan when the Warriors ran the exact same play for Curry on the next possession. 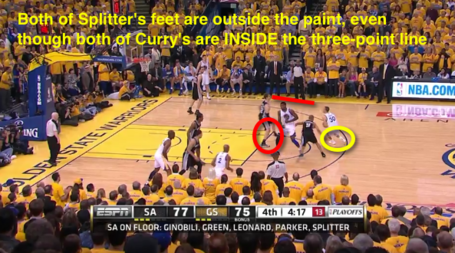 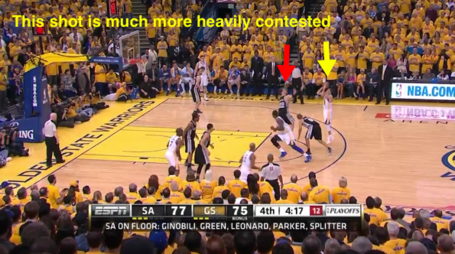 That small adjustment in positioning makes all the difference. Here's the play in real time.

On the next play, Splitter steps up high on an off-ball screen to prevent Curry from pulling up, forcing an isolation that doesn't end well for the Warriors' star. 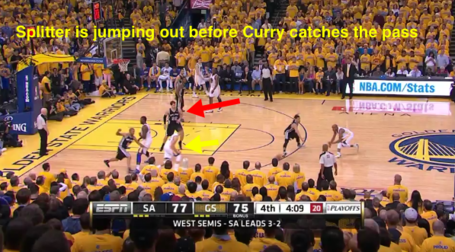 Duncan was too slow to do his work early like Splitter does here. The effect: Curry is trapped, and while Splitter's man, Festus Ezeli, is open on the roll for a split second, the length of Splitter prevents Curry from making an easy pass. 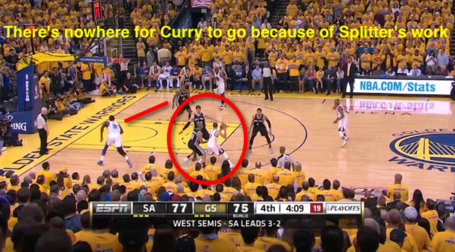 Most importantly, Splitter does what Duncan didn't do earlier: retreat to his own man once Parker recovered. This forces Curry into an isolation that ends with a missed contested jumper. 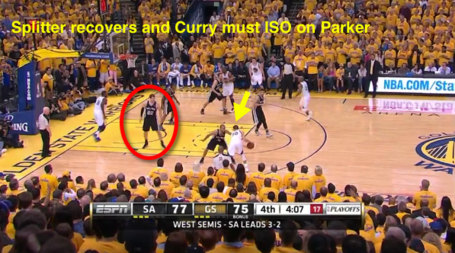 Splitter also was big for the Spurs' offense down the stretch. The Spurs scored just once in six possessions when Splitter and Duncan shared the floor from the 7:36 mark of the fourth until Duncan was benched at the 4:28 mark, and that was on a set curl play for Danny Green. Otherwise, the Spurs' pick-and-roll game was neutralized because of spacing issues. Once Duncan was taken out in favor of a small lineup with Kawhi Leonard at power forward, the spacing dramatically improved. Hence, 17 Spurs points in the final 4:28.

Here, Splitter's hard roll to the rim draws the entire Warriors' defense, creating a wide-open three for Parker in the opposite corner. 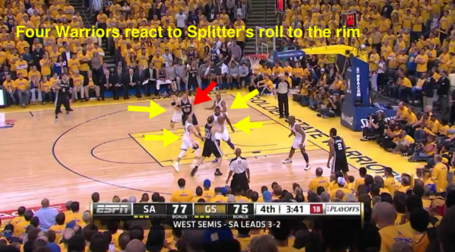 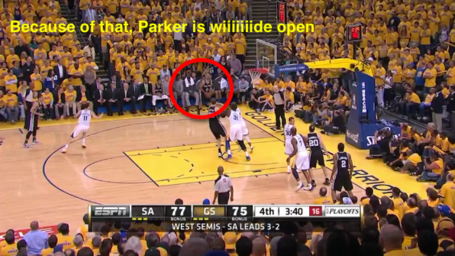 A minute and a half later, Splitter springs Ginobili free on a stretch pick-and-roll 35 feet from the hoop. Ginobili eventually attacks the Warriors' big man (Ezeli) with a full head of steam before kicking out to Leonard for a huge corner three. 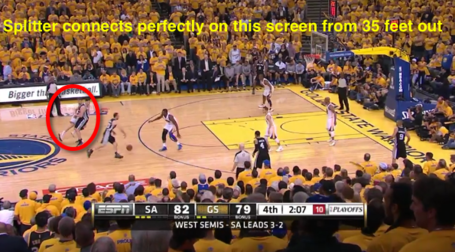 Duncan is a great player still, but he lacks the mobility to properly execute that stretch pick-and-roll play. Splitter, though, has that mobility.

Duncan is obviously an extremely valuable player to the Spurs, and under normal circumstances, he'd be the one to carry them home. However, Game 6 against the Warriors specifically called for better quickness contesting the Warriors' jump-shooters and more spacing to attack offensively. In that specific situation, Duncan was a liability.

Rather than stubbornly ride his star in a risk-averse move, Popovich showed backbone and played the five-man unit that was better suited to getting this specific job done. It worked, and it's why he's the best coach the NBA has today.

• Flannery: What's next for OKC Thunder?