Nike opts for clean & classic with their first England kit

Share All sharing options for: Nike opts for clean & classic with their first England kit

Nike's sponsorship of England was announced in September of last year. The sportswear giant had made a decision to divest of Umbro, who had sponsored the Three Lions for the better part of 60 years. As part of the divestment process, Nike held onto some of Umbro's most important sponsorship properties, including, but not limited to, England. Umbro's influence would run its course before Nike took over this spring.

The England and Nike era has now officially begun with the two parties officially unveiling England's brand new home kit. The look was first shown off by Arsenal and England midfielder Jack Wilshere with a tweet this morning. The midfielder went back to the Priory School in Hitchin, Hertfordshire, his former school (wearing the new shirt) and picked out student Jason Kelly to reveal the shirt to the world. Kelly posed for a photograph that would later go out on Twitter for all to see.

"This is where my dream of playing for England started and it's great to be back here to see a new generation playing with the same passion," Wilshere said. "I gave Jason the shirt because his commitment and work-rate really impressed me today, he showed that it's what you do on the pitch that matters - from your first match as a nine year-old all the way up to the international stage."

Like this kid, my England dream began here, so he was first in #theshirt – England’s new kit from @nikefootball twitter.com/JackWilshere/s…

Much like the Centennial shirt that Nike crafted for the United States Men's and Women's National Teams, the look for England is very much clean and classic. The look follows Three Lions tradition with an all-white body and navy blue accents around the collar and bears the iconic Three Lions crest, specially rebranded for the FA's 150th anniversary.

The navy blue is the same color that England donned on their very first kits, a century-and-a-half ago. The shirt will be paired with dark blue shorts and mainly-white socks that bear a thin blue band.

Like other Nike kits of the past few years, the emphasis is on style and technology here. The polyester in the shirt is created from recycled plastic bottles, which Nike says reduces energy consumption by 30% (compared to manufacturing virgin polyester). The shirt weighs 150 grams, 23% lighter than similar shirts that came before Nike's current generation. It also features the Dri-FIT technology as well as ventilation zones to keep fans and players alike cool. 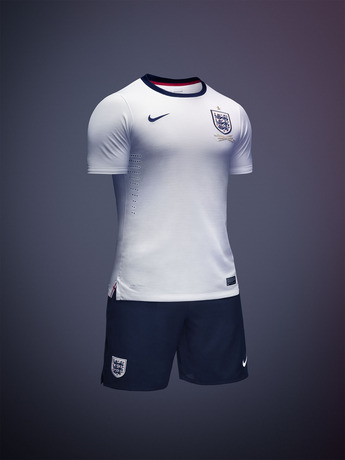 Where Umbro was famous for its tailored look, Nike too has embarked on a mission to get the perfect fit for its athletes. According to Nike, the company "embarked on an innovative programme of 3D body scans of some of the world's leading players to produce a more athletic fit tailored to footballers' physiques."

The shirt should see its on-field debut later this month when England take on the Republic of Ireland at Wembley before facing Brazil the following weekend.