Last week over at ESPN.com, Jim Caple and Paul Lukas put together a Battle of the Uniforms, with every team getting a seed. I suppose the Orioles winning was a huge upset, since they started the tournament as a No. 13 seed; on the other hand, it's hard to figure why they were a No. 13 seed, except that Caple hates "those home caps with the white-panel front."

The truth is that most of today's teams look pretty damned good out there. Not that anybody's perfect. I've got a friend who would like to change literally every uniform in the majors. Those classic Dodger jerseys? The red number on the front is too large. Those classic Tiger jerseys? That (supposedly) olde English D? Not bad, except it's in the wrong spot. The Yankees' jerseys? Great, except for the trim around the sleeve.

And now that I'm looking, I think my friend is right! But most of us don't have his eye for detail, so I'm going to stick to the low-hanging fruit, and there's really not much of that because -- leaving aside some of the alternate liveries out there -- today's uniforms are generally quite attractive, at least when they're not wearing dark jerseys with white pants (which never looks good) or camouflage (ditto).

There are exceptions, though. When I think of the Padres' current uniforms, I think ... nothing. Or as Paul Lukas describes San Diego's livery, "a design program that has completely lost its way." And this becomes all the more obvious a couple of times every month, when the Padres don one of their throwback uniforms.

Do you want to see these every day, though? 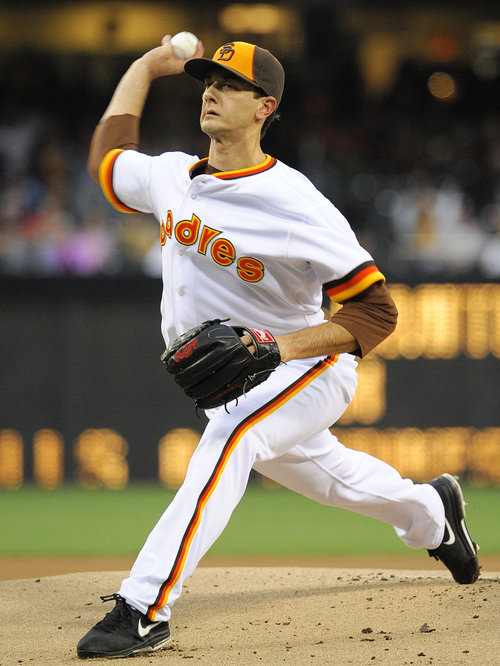 Granted, we don't want to see that uniform every day -- too much striping! -- and I suspect that most of you don't share my affection for wall-to-wall mustard. But for their first 22 seasons, the Padres were unique, the only major-league club that embraced browns and oranges and yellows. And in 1991 they shifted to blue and it's just been downhill for these last seasons. Well, it's time to be unique again. I hate hate hate the Padres' camouflage uniforms, but at least they're different and I'd rather see them wearing those every day than these blue uniforms they're sporting now. Well, actually that's not true. I actually can't watch the Padres when they're wearing the camo. My eyes, they burn. But the Padres should embrace their Padreness, and those things they're wearing now embrace nothing but blasé.

Moving along ... Black liveries have their place, but I will argue that baseball's not that place. If George Carlin added color to his classic routine, he would have limited black to football. Because it just doesn't look real good on a baseball field. Now, I love the 1983 throwbacks the White Sox are wearing this season. But Sunday home games is plenty; like those Padres throwbacks above or the Astros' rainbow jerseys from the 1970s, a little 1970s/early-'80s gaudiness goes a long way. But the White Sox have been around forever and they've worn some pretty uniforms. I'm a fan of the early-'70s livery, with red pinstripes at home and those baby-blue road outfits. But if you don't like those, there are plenty of other options. And again, I'm not suggesting that the current club should revert to old uniforms, but rather take those some of those old uniforms for inspiration.

Now, about the Cleveland Indians ... I'm not even getting into the whole Chief Wahoo thing. That's not what this is about, because I'm also offended -- esthetically, I mean -- by the "Indians" script on the chest of the standard home jerseys. The big loopy I and the angular swoosh beneath it all ... it's just not a clean or classic look. Of course, the Indians do have a clean, classic, and beautiful look ... but they wear it only for selected home games (weekends, mostly). Which is a lot better than nothing. But it's hard to figure why they don't adopt those jerseys for full-time use, since they're obviously so much more attractive. If that's just not an option, the Indians could make a slight tweak and keep the cursive look, but with skinnier letters and without the underlining swoosh. Just like what Al Rosen wore in the 1950s. Again, there's nothing wrong with elegance.

I don't know what it is about the American League Central, but the Twins have almost exactly the same problem as the Indians: fat cursive on the home jersey, with the angular swoosh. And like the Indians, the Twins have a beautiful alternate home jersey that should be their main jersey. Now, the Twins have always had a swoosh. And they've always had roughly the same lettering style they use now. But (again) just like the Indians, the Twins have enlarged the lettering and the swoosh to the point of gaudiness. If they want to keep those beautiful alternates as alternates, they could simply go back to their inaugural (1962) jerseys. Except without the pinstripes. I should, before leaving, give the Twins huge kudos for reviving the interlocking T-C logo on their caps. That was huge.

On the list of horrible things about the Miami Marlins, I suppose their uniforms are pretty far down. But man, their uniforms sure are horrible. I don't mind the colors; the Marlins should have distinctive colors. But it's just ridiculous to feature not one, nor two, but three giant "M" logos on the livery: one on the cap, one on the chest, and one on the sleeve. The Marlins could solve a lot of their esthetic problems by simply subtracting one of the M's on the jersey and shrinking the M on the cap. But they could also go minor-league classic (including shoulder patch); Satchel Paige wore that one!

And finally, the Brewers. Sheesh. Their cursive script is unique and not unattractive, but otherwise they're just the Padres East (or Central, if you're into your divisions). I much prefer the cleaner look of the early 1970s. But if those won't do, the Brewers can always hearken back to the city's minor-league days for one classic look or another.

I'm sure that plenty of Brewers fans love what the club's wearing now. Some fans love everything their team does (except losing, usually). But teams should do better than that. Every team has no excuse for not wearing uniforms that we all can love. Or at least those of us with exceptional taste. Scientifically speaking, I mean.