Rafael Soriano is a dingus

And other assorted thoughts.

Share All sharing options for: Rafael Soriano is a dingus

Bryce Harper's non-play in right field was interesting enough for a little morning post. And then Rafael Soriano opened his big mouth, and it became absolutely compelling.

That was a two-strike, two-out triple to tie the game in the ninth; the Giants eventually won in the 10th. Harper admits his collision with a fence last week played a part in his inability to catch the ball. That's a take-one-for-the-team answer from the 20-year-old. When I was 20, I spent my nights trying to crack whippits open with a desk drawer, so anything more than that always impresses me. But I'm not sure if Harper was that close to the play. Here's where he started his leap: 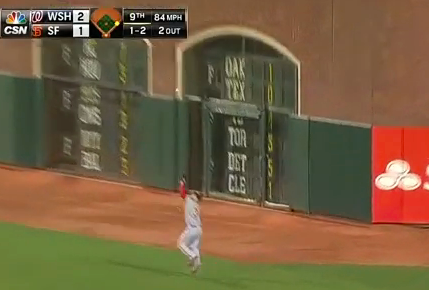 And here's where the ball landed: 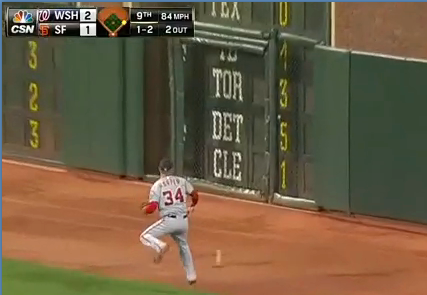 Close, and maybe if Harper ran back at a full sprint he would have gotten there. The video will probably tell you more than the screenshots, but it was going to be a tough play no matter how Harper played it. Blanco crushed it.

(An aside on how the Dodgers' season is going: The Dodgers lost the game in which Harper collided with the wall, and it still might have led to a Giants win a week later. It's impressive how many different ways that team can get hosed in the early part of the season. Probably Mattingly's fault.)

For some reason, Rafael Soriano opened his big dingus mouth. This is really, really amazing:

"It may not have been a catch-able ball, but if we're positioned the right way, there might have been a different outcome. With two outs, I could tell my four-year-old son, 'You know where you need to play,' and he would have positioned himself better. It's not an excuse, and I'm not speaking badly about anybody, but I think that's how you play the game.

Here's where Harper was when the cameras cut to the outfield: 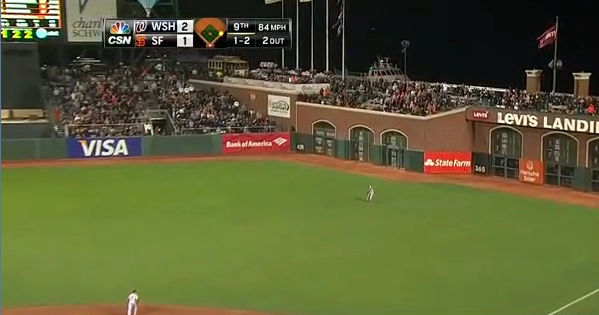 Not pictured: Denard Span. Which is important. If Span is shading Blanco to go the other way, perhaps Harper should have been over toward center more. That's sort of a traditional late-inning defense at AT&T Park. Except, here's Gregor Blanco's hit chart:

Blanco doesn't hit a lot of fly balls into the right-center gap. He's not completely punchless, and occasionally he'll get into one, but in the past year, there would have been three or four hits that might have been taken away if the right fielder was playing way, way off the right-field line. With Andres Torres at first and Harper basically playing in center field, those green squares toward the right-field line could have been just as damaging. With Torres's speed, anything that gets to the wall has a chance to score him. Blanco was much more likely to pull a line drive down the line than drive one to the deepest part of the yard.

So Soriano probably shouldn't have opened his yapper. The Nationals were positioned correctly, and the guy who didn't make the play is a star who plays like he's forever in danger of getting released. If he had Tyrannosaurus arms on the play, it's because he literally ran into a fence at full speed last week. Context, man, context. That's how Bump Bailey died, you know. How many pitchers would even think to nitpick that guy? 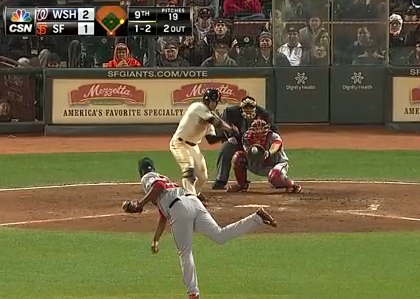 Cool two-strike slider, Rafael Soriano. He'll never look for it there. But by all means, spend your time after the game talking about your four-year-old son's brilliant positioning.

Bryce Harper is beating himself up over something he shouldn't. The Giants had no business winning that game, but most of the blame should be put on Soriano for making a bad pitch at the wrong time. Blanco has serious trouble with back-foot sliders. Thigh-high sliders? Not so much.

And that has nothing to do with running into fences. Soriano will apologize soon. That's how these things work. Of course, these things usually don't happen because pitchers know when to bite their tongues. Of all the times to let loose on a teammate, this was certainly one of the strangest in recent memory.