Arkansas made a hell of a statement by stealing annual Rose Bowl coach Bret Bielema away from Wisconsin and the Big Ten. But Bielema inherits a relatively thin roster, and it might take him a little while to navigate through the zero-sum SEC West.

Share All sharing options for: 2013 Arkansas football's 10 things to know: A lower bar and a hell of a hire

We hear a lot about how amazing the SEC is. The chatter goes above and beyond a lot, which both serves as a detriment to the argument (bad) and as a prompt for coaches of non-SEC programs to shoot their mouth off at times (good). But whether you come down on the "Pssh, the SEC isn't that great" side of the argument or the "I, for one, welcome our SEC overlords" side, you have to admit one thing: It was one hell of a statement for the conference to bring in the reigning Big Ten (Bret Bielema), Big East* (Butch Jones), and Sun Belt (Gus Malzahn) champion coaches in a single offseason. That, to me, was a more impressive statement than the "seven straight national titles" thing.

* Yes, Jones' Cincinnati squad was the co-champion of the Big East with Louisville (and lost the tie-breaker), and yes, that ever so slightly dings the argument. And if you wanted to further ding it, you could point out that Wisconsin only got to win the Big Ten in 2012 because Ohio State was banned from the postseason. But still. We're talking about aesthetics here, not technical details. The technical details start below.

That Bret Bielema, who brought Wisconsin to three consecutive Rose Bowls from 2010-12, not only jumped ship for an SEC program, but one that has never actually won the SEC, was the biggest statement of all. Bielema was not only at the helm of a pretty consistently strong Wisconsin program, but he was one of the more pro-B1G coaches on the conference roster. A former Iowa nose tackle, under Hayden Fry, Bielema fired away at Urban Meyer's SEC-esque recruiting tendencies in 2012. And now he's SEC, too.

2. Worse without Petrino … to an extent

I was both right and wrong about Arkansas in 2012. I struggled greatly with the top-10 hype; I saw too many close wins, too many warning signs, and too much defensive mediocrity in 2011 to believe that things would not only all come together in 2012, but all come together without head coach Bobby Petrino. Still, I didn't expect such uniform regression either. Arkansas sank from 11th to 43rd in Off. F/+, from ninth to 97th in Special Teams F/+, and, despite staff changes and experience, from 45th to 72nd in Def. F/+. Throw in a change of close-game fortunes -- Arkansas was 3-0 in one-possession games in 2011, 1-3 in 2012 -- and you've got a recipe for a seven-game turnaround in wins. The Hogs fell from 11-2 to 4-8, and the one-year John L. Smith experiment ended quietly.

Arkansas' regression was both uniform and stark, and that leads me to believe that something similar would have happened even if Bobby Petrino hadn't fallen from both a motorcycle and whatever grace he had found in Fayetteville. Petrino just hadn't recruited well enough on the defensive side of the ball to create a truly elite team, and as we saw, Arkansas was just one key injury away from falling apart offensively.

Regardless, the cupboard isn't exactly bare for Bielema heading into 2013.

3. Why did Tyler Wilson fall in the draft?

It was an odd experience, watching the 2013 NFL Draft, with just one quarterback taken in the first 38 picks, and realizing midway through the fourth round that Tyler Wilson had not yet been selected. Projected as a potential first-rounder a year earlier, Wilson's draft stock was muddied, evidently, by the disappointing product Arkansas put on the field in 2012, even though he really didn't have much to do with that disappointment. After completing 63 percent of his passes and averaging 7.5 yards per pass attempt in 2011, Wilson lost his top two targets, dealt with an early-season injury, and finished 2012 with a 62 percent completion rate and 7.9 yards per pass attempt. Yes, his interception rate went up, from 1.4 percent to 3.2 percent; but he was also facing a tougher slate of defenses, and he was facing a lot more "You're behind, and the defense knows you're going to pass all the time" situations. That, and 1.4 percent was almost unsustainably low.

Wilson really shouldn't have taken much, if any, blame for Arkansas' 2012 struggles. The Hogs' greatest struggles, actually, came with him on the sideline.

Wilson was hurt late in the first half against UL-Monroe and missed the Alabama game; so he basically missed the six most atrocious offensive quarters of the season. The Oakland Raiders may have gotten a complete steal landing him in the fourth round of the draft. 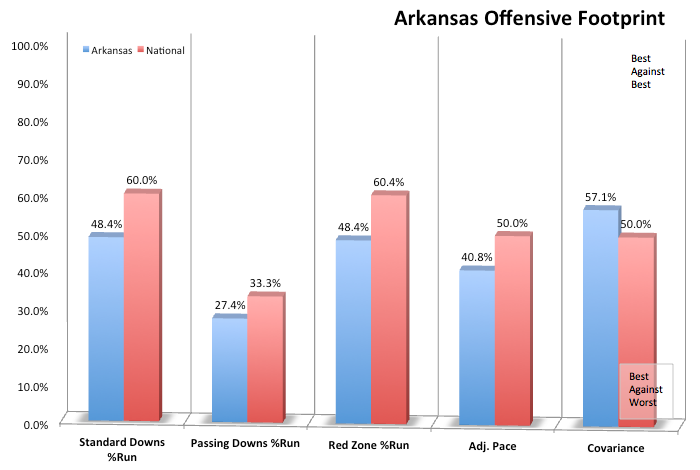 There are no more Petrinos on staff, and Wilson is gone. So let's talk about this year's Arkansas team. With no WIlson, Knile Davis, or Cobi Hamilton, the Hogs are lacking in proven stars, especially at the quarterback position, where Brandon Allen was in no way ready to hint at four-star potential last fall. Bielema will encounter quite a few issues with experience and offensive depth, but if he can figure out how to finish drives, he will have at least solved 2012's biggest issue.

5. Jonathan Williams will rush for 1,000 yards this year

The Arkansas offensive line really did struggle in short-yardage and power situations last year, but it was a strong line down-to-down. And in returning three-year starting center Travis Swanson, tackle David Hurd, and three other players with starting experience, it should be good enough to make sophomore Jonathan Williams look, at times, like a reasonable Montee Ball facsimile. Bielema and Wisconsin remained tactically interesting through the years despite turnover in the offensive coordinator chair, and to be sure, this offense will feature more than just "running back off right tackle" and "running back off left tackle." Still, Ball did average 23.7 carries per game in 2011-12, and Williams and his fellow backs will get plenty of opportunities to prove themselves. It would shock me if a healthy No. 1 Arkansas back didn't gain 1,000 yards in 2013.

In losing Jarius Wright, Joe Adams, and Greg Childs, Arkansas faced having to replace 47 percent of its targets following 2011. And in losing Cobi Hamilton, Brandon Mitchell, Chris Gragg, and Dennis Johnson, Arkansas now faces having to replace 57 percent. Two years of extreme turnover can severely deplete a receiving corps, and while Petrino certainly recruited plenty of interesting receivers during his tenure, there are almost no proven weapons here.

Mekale McKay had an interesting freshman season as an all-or-nothing guy (15.1 yards per catch with barely a 50 percent catch rate in 3.3 targets per game), and players like Javontee Herndon and Julian Horton have certainly waited for their turn atop the depth chart. But there is very little proven talent here, and the offense will need the threat of the play-action to keep defenses on their toes. (Plus, new coordinator Jim Chaney is far from averse to the forward pass; his Tennessee passing game last year was top-notch.) Maybe McKay thrives in that role, but if he doesn't, then who steps up? 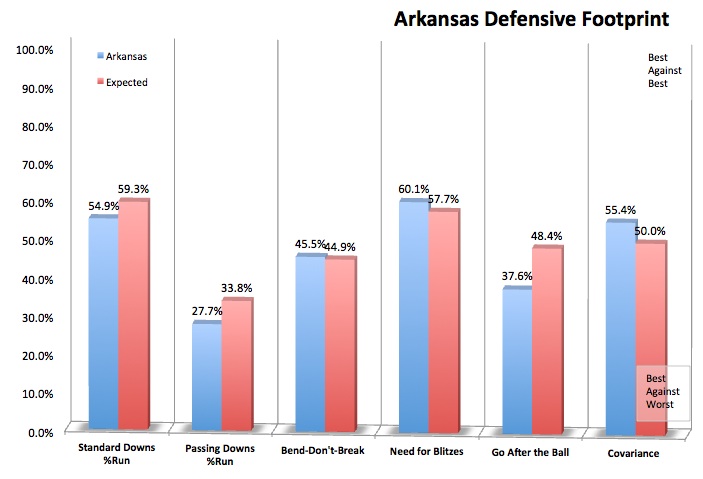 Arkansas plays in the SEC West, which, as you know, features run-first teams like Alabama, LSU, and Auburn. Yes, the Hogs also faced pass-happy teams like Texas A&M and the Mississippi schools, but it is still a bit jarring to see that opponents passed quite a bit more frequently than the national average against Arkansas. Then again, opponents aren't stupid: They knew they could pass on Arkansas, so they did.

The Hogs didn't have much of a pass rush beyond a stellar pair of defensive ends, and the secondary was both young and incredibly passive. No DB defensed more than five passes, and despite a Top 50 pass rush, Arkansas ranked an awful 101st in Passing S&P+. Wisconsin's secondary in 2012 was aggressive and successful under coordinator Chris Ash (who came to Fayetteville with Bielema), and while it is probably too much to ask for an immediate turnaround, any sort of improvement in the secondary would be welcomed.

The struggles in pass defense and the overall defensive regression distracted us from the fact that Arkansas really did have a damn strong run defense in 2012, one that could potentially hold up this fall despite massive turnover at linebacker. The defensive end duo of Chris Smith and Trey Flowers was strong in rushing the passer but also held up against the run, and two key members of a five-man tackle rotation (Byran Jones and Robert Thomas) return. The depth on the line is not nearly as strong as it was last fall, and that could be an issue with any injuries whatsoever. But the starting front four, as currently constituted, is one of the better lines in the SEC. And that's saying a lot.

If the answer is yes, that says some positive things about this year's Arkansas secondary, which has a lot more experience than it did nine months ago, when freshmen Rohan Gaines, Will Hines and Davyon McKinney and sophomores Tevin Mitchel and Alan Turner were all forced to play more minutes than they were ready to play. This time around, however, the top seven backs all return, and two junior college transfers enter the fray as well.

Of course, if experience indeed matters, then that says some extremely negative things about this year's Arkansas linebacking corps, which is replacing five of the seven players who logged at least 10.0 tackles in 2012. Sophomores A.J. Turner and Otha Peters are now the wily old veterans, and junior college transfers Martresll Spaight and Myke Tavarres have almost no choice but to be immediately ready for playing time. Without punter Dylan Breeding, one of the best in the country in 2012, Arkansas opponents might be seeing some shorter fields this fall; it is absolutely vital that improvement in the secondary doesn't simply offset regression at linebacker. The entire defense needs to step forward in 2013.

When you are simply looking to return to a bowl -- and in the SEC West, that's all Arkansas can really aspire to in 2013 -- then it probably benefits you to start from the bottom of the schedule, not the top. There are plenty of potential wins on a schedule that features six teams projected to rank 48th or worse this fall and home games versus two teams projected in the teens (Texas A&M and South Carolina, both of which are quite a bit higher than the teens according to humans). The Hogs should certainly threaten for 6-6 or 7-5 this year, but to reach a bowl the biggest goal has to be surviving October with your confidence and health intact.

From September 28 to October 19, Arkansas will play two tough but potentially winnable home games (Texas A&M and South Carolina) and go on two brutal road trips (Florida and Alabama). The Hogs were done a favor with a post-Alabama bye week, and if they're at least 4-4 heading into November, then 6-6 is quite probable. But wow, is that a tough stretch.

Bret Bielema inherits a team that is probably too young at key positions to succeed at any high level, but it is talented enough to return to the postseason after a one-year absence. It will certainly take him a little while to build the type of program that he was maintaining at Wisconsin in recent years, especially in the zero-sum universe of the SEC West; for Arkansas to go up, somebody has to go down, and aside from maybe Mississippi State, who in the West looks like they're ready to go down? Still, Arkansas made a hell of a hire, and it should pay off eventually. Just erase your 2012 expectations from your mind a bit and embrace the rebuilding project.