NBA Mock Draft 2013: Going away from the consensus

The rankings of the prospects in an NBA Draft class do not usually hold to form. That's especially true in 2013. Here's one mock draft that shakes things up, putting players in different spots than you'd expect.

Share All sharing options for: NBA Mock Draft 2013: Going away from the consensus

To give these mock drafts some variety, we're going in a different direction this week. Instead of looking at where guys are likely to go, this is purely my opinion on where I think they should go.

With a few exceptions, I think the pre-draft consensus is about right as far as who's in the top 10 and who's in the 11-25 range. However, there isn't a whole lot of separation within those tiers. As a result, drafting guys into roles that fit the strengths of their game will be crucial. In many ways, the players you drafted in the last two or three years can determine who you're able to draft this year.

This mock draft will differ from the consensus.

Cleveland has two picks in the first round, and two positions -- center and small forward -- where they don't already have top-five picks. Early in the the draft, unless there's a superstar available, you always go with the big man. I already wrote why Len is a better prospect than Nerlens Noel, but this is another good breakdown from ESPN's Fran Fraschilla. 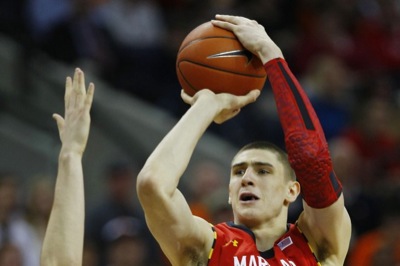 Fear the Sword considers the possibility

Orlando is still figuring out what they have in Nikola Vucevic, Tobias Harris and Maurice Harkless. There's no reason to draft a frontcourt player who blocks their development, especially when a safe pick with a lot of upside like McLemore is on the board.

I have Bennett as the No. 1 player in this draft. He is a frontcourt player that can get his own shot while also spacing the floor for John Wall and Bradley Beal. The Wizards could be the 2010s version of the "Three J's" -- Jason Kidd, Jim Jackson and Jamal Mashburn.

This is too high for Zeller as a center, but it makes sense if you think he has the speed, skill and athleticism to be a face-up power forward. Take Noel, and the Bismack Biyombo experience ends. Take Zeller, and Air Byron Mullens is grounded. The latter is better.

Noel is good, but he's not the type of player you rearrange your team to draft. He's a 206-pound center with no low-post game and no jump shot. He doesn't have the the offense to be a power forward, and he'll need to become significantly stronger before he can be a starting center.

The interesting question with Burke is where he lands if the Magic and the Pelicans pass on him. He's not big enough to play off the ball, and most of the other teams in the lottery already have a point guard.

Porter is a smart player with a great feel for the game, which is probably why he compared himself to Tayshaun Prince. That's good value at No. 7 for a Sacramento team that needs a small forward, but Porter doesn't have a lot of upside for a top-three pick.

I really like the fit for player and team. A 6'6 point guard like Carter-Williams is the best way to keep Brandon Knight in the starting lineup. Those two could be a combination greater than the sum of its parts.

Minnesota should get a solid player here if they take whoever falls. Oladipo was probably my favorite player to watch in college last season, but I don't know if he needs to be compared to Michael Jordan.

The next Paul George? 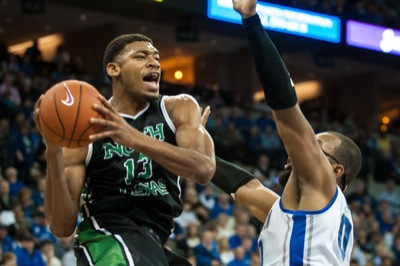 Why Tony Mitchell is this year's sleeper.

The Blazers need a difference-maker to push them over the top, and all the safe picks could be gone. Mitchell is the perfect combination for them: he has a tremendous amount of upside and a high floor, given his off-the-charts athleticism at 6'9, 235 pounds.

At 6'6 and 200 pounds with a 6'11 wingspan, Crabbe is a pure shooter with a ridiculously high release point. His length will allow him to shoot over the top of smaller guards and be at least passable defensively. He could be a solid two-way starter next to Jrue Holiday.

Dieng is a solid two-way player who can help the Thunder right away at an important position. Kendrick Perkins had a -0.6 PER in the playoffs this season. That will never cease to amuse me.

The Mavericks may want to clear cap space to make a run at Dwight Howard, but that's no reason to give away the highest pick they've had in over a decade. If need be, Schroeder can be stashed in Europe for another year or two.

A half-court team that wants to play inside-out needs a big point guard like George Hill, with the shooting ability to stretch the floor and the size to make entry passes. At 6'3 and 180 pounds with a 6'5 wingspan, Green is like C.J. McCollum, except he's a more natural point guard with a quicker first step.

This is a nice intersection between team need and the best player available. At 6'7 and 200 pounds, Karasev needs to add some weight to be a starting-caliber small forward, but his passing and shooting ability will make him a good fit with whomever Milwaukee brings back.

Franklin was one of my favorite players in college last season. At 6'5 and 190 pounds with a 6'11 wingspan, he has fantastic length for a wing player, great athleticism and a good feel for the game. If he could shoot, he would be a lottery pick.

As long as Atlanta has Al Horford and Jeff Teague, they aren't rebuilding. Caldwell-Pope has prototypical size (6'5, 205 pounds) and shooting (38 percent from deep) for the off-guard position, and he has the athleticism to be a defensive contributor, too.

Atlanta could swing for the fences here, but this is also a good opportunity to fill a hole with a cost-controlled young player. Plumlee can step in right away as a shot-blocking center who runs the floor and finishes around the rim.

Bullock is a great fit for Cleveland. He's an athletic wing with size (6'7, 200 pounds) who can guard multiple perimeter positions while also stretching the floor for Kyrie Irving and Dion Waiters. 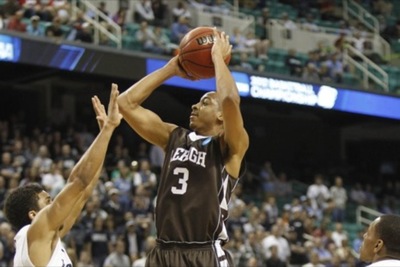 How good can the Lehigh product be?

McCollum won't last this long, but I'm not quite as high on him as others. Everyone remembers the upset of Duke, but he had Austin Rivers and Seth Curry on him! If I knew those guys would guard him every night, I'd take him in the top five.

This would be Utah's sixth first-round pick in the last four years. Saric, a 19-year-old combo forward from Croatia, is a guy they can keep overseas for a while. If he develops a more consistent outside shot, he'll be a steal.

I'm not trying to troll; I just don't think his skill set is all that valuable. Shabazz is an undersized small forward who isn't a high-level shooter, passer, rebounder or defender. He will get buckets, but if he doesn't get them efficiently, what's the point?

The Pacers have needs all over their bench, and a player who can help should fall to them. While Olynyk is a defensive tweener, his size and shooting ability will give him a long NBA career.

The Knicks could have used Rasheed Wallace against the Pacers. At the very least, they need a guy who can stand behind Roy Hibbert and shoot threes. Kadji, at 6'10, 245 pounds with a three-point shot, is that guy.

If I could see Adams' pre-draft workouts, where he is apparently displaying a ton of skill and a feathery touch from the perimeter, I'd probably have him higher. All I can go by is his freshman season, where he looked a long way away from helping an NBA team.

For a team with two first-rounders, Gobert is worth the gamble as a 20-year-old with a 7'9 wingspan. He might end up being a huge steal, but I'm always leery of skinny shot-blockers with no offensive game. He could use some more time overseas.

With Andre Miller getting older, Brown (6'5, 190 pounds with a 6'7 wingspan) would be another big point guard who can let Ty Lawson play off the ball. He's not a great shooter, but he can contribute as a passer, rebounder and defender at multiple positions and he's excellent in the open court.

Leslie has a higher ceiling but a lower floor than his old teammate. At 6'9, 210 pounds with a 7'2 wingspan, he's an elite athlete with a lot of skill, but he's undisciplined, can't shoot and gives inconsistent effort. An ideal candidate for the Spurs' D-League team.

Adetokoubo is an 18-year-old from Greece on a second-division team. He has never competed internationally and didn't come to the Hoop Summit or the combine. Someone, possibly the Thunder, is trying to sneak him through the draft.

Kabongo has a lot of talent, but he didn't put it all together at Texas. He has great size (6'2, 180 pounds with a 6'6 wingspan) and speed for his position. Maybe he figures it out after a year in the D-League.

• Flannery: The night the Pacers grew up

• Spencer Hall: A weekend in Memphis

• How the Mavs can learn from the Spurs