Jon's Golf Course: Where there is a golf course which Jon has designed

It's prime golf season, which means there's no better time to design a golf course. Please give Jon input on what you think of his golf course, which he is quite proud of.

Share All sharing options for: Jon's Golf Course: Where there is a golf course which Jon has designed

Hello to you and everyone else! Every once in a while, I come up with an idea that I hope that you folks will enjoy, like, and think is great. Well, it's prime-time golf season, so I thought it would be fun to design my very own golf course.

I have never designed a golf course, and I would like to apologize in advance if I come across to professional golf course designers as a Näïvë Neville. But I do bring the following qualifications to the table ... er, golf course: 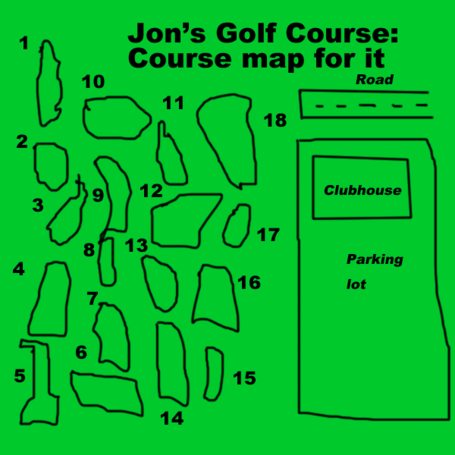 Immerse yourself in 18 holes of grassy luxury at Jon's Golf Course. At Jon's Golf Course, you will experience plenty of fairways and greens ... but BEWARE THE BUNKERS! Steer clear of the hazards, choose your clubs wisely, and hit and putt your way to victory. That's how ya beat the competition. We have been careful not to make any parts of the course look like a dong. The fifth hole has been altered so that it looks instead like a dad or mom goose looking over its children.

Like many renowned golf courses, Jon's Golf Course features plenty of signature features that often have stories behind them.

Third hole: "Reggie's Nook." I named this after a guy I used to know named Reggie who freaking loved nooks. He lives in Missouri now.

Sixth hole: "Golf the Evolution." I designed this hole while listening to "Do the Evolution" by Pearl Jam. It's one of my favorite songs.

10th hole: "Keaton's Korner." In the 1998 film Jack Frost, Michael Keaton is a harmonica player in a band called The Jack Frost Band who dies in a car wreck and comes back to life as a snowman named Jack Frost to reconcile and play games with his son. Then it gets hot out and he melts and goes to Heaven. This korner is a monument to his struggle.

12th hole: "Non-White Folks Allowed Corner." Non-white folks are actually welcome to play throughout the entire course and always have been, thus ensuring that even if this golf course is really bad, it is by default not the worst, meanest, crappiest golf course of all time.

18th hole: "END OF COURSE." Hit the road, pal, for you are done golfing. (That is not supposed to be mean, it's just a fact. If it went on forever you would lose your job and the course would take up the entire planet, leaving gaggles of children and folks like yourself without a home. Ever get rained on? It ain't no trip to the toy store, buster.)

1. Make sure to bring your golf clubs.

2. No hitting other folks or yourself with golf clubs.

The clubhouse is where the pros who know hang out before, during and after a game of golf. Feel free to pull up a chair and have your favorite food and drink while having discussions about putters, golf balls, or whatever the people you are with happen to be talking about.

The clubhouse features its very own bar & grill, "The 19th Hole." This is another instance in which an idea has already been realized by many other folks, but which I would have come up with myself if nobody else did. I am proud to introduce the menu: 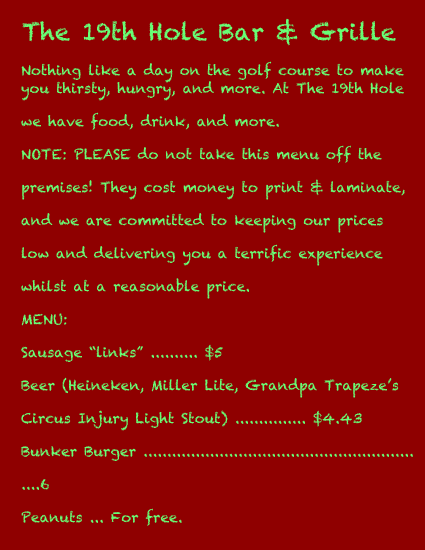 I'm probably going to get a laminated book or binder thing for it, in case the menu expands. If you have any other ideas for dishes that you would enjoy, please let me know!

This is where you come in, reader. I am still trying to decide on a slogan for Jon's Golf Course. Please vote for one of the following options, or suggest your own in the comments section.