A field of 19 three-year-old colts will load into the gate at Churchill Downs on Saturday seeking their place in history.

The waiting and anticipation is over. Months and months of preparation, prep races and planning comes down to a 120 seconds of thoroughbred speed on the first Saturday in May. It's the 139th running of the Kentucky Derby, the "Greatest Two Minutes in Sports," and for one horse and their connections, this race will be the highlight of their careers.

Let's take a look at the field for the 2013 Kentucky Derby:

1-Black Onyx (50/1): He's not a speed horse but he likes to show a little bit of energy coming out of the gate, and there is very little room for error after drawing the rail. Black Onyx has scratched from the Derby. Alternate Entry Fear the Kitten will not run in the Derby because the scratch occurred after the deadline for AEs to draw into the field.

2-Oxbow (30/1): Given his flop in the Arkansas Derby and this inside post position, Oxbow will likely be sent hard by jockey Gary Stevens right from the gate.

3-Revolutionary (10/1): Looked fantastic winning the Louisiana Derby on March 30 and should be one of the main contenders in the final stretch drive. 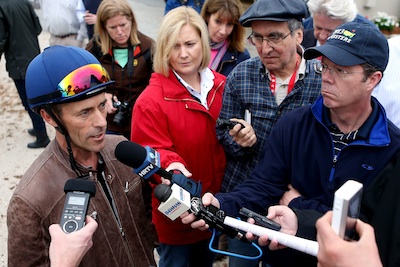 4-Golden Soul (50/1): He's finished behind a lot of horses in this field this past winter and spring, and he'll need to get better in a hurry if he's to win this race.

5-Normandy Invasion (12/1): Possesses a very strong late kick and prefers to do his best running during the last quarter of the race. If he can get a clean trip around the track, he could be a factor at the finish.

6-Mylute (15/1): Ran huge to finish second to Revolutionary in the Louisiana Derby but can he duplicate that effort in the Derby? If not, he's going to struggle to hit the board.

7-Giant Finish (50/1): A late addition to the Derby field, this New York-bred colt is going to need some luck if he's to pull a major upset.

8-Goldencents (5/1): Winner of the Santa Anita Derby last month, Goldencents comes into this race off of the best performance of his career. If he backs that race up with another strong performance on Saturday, he could find himself in the winner's circle.

9-Overanalyze (15/1): Won the Grade 1 Arkansas Derby in his last start but there's a question as to how strong that race was overall. He typically runs in the middle of the pack and should get a great trip from his post position (unless some horse slams into him leaving the starting gate).

10-Palace Malice (20/1): Looked like a certain winner in last month's Blue Grass Stakes at Keeneland, but was nipped at the wire by the hard closing Java's War. He's run well over a wet track previously in his career so keep an eye on this colt if it gets wet.

11-Lines of Battle (30/1): Making just his second start since early November, this Irish-trained horse is trying to buck decades and decades of Derby history by winning this race off just a single prep.

12-Itsmyluckyday (15/1): Got beat by Orb in the Florida Derby on March 30, but he's had a heck of a spring and has developed into a legitimate threat to win this race. However, there is a bit of a question if 10 furlongs is going to be his best distance.

13-Falling Sky (50/1): Likes to run on the lead and most likely won't get it all to himself in the Derby. He's another colt that's run and won over a wet track previously in his career.

14-Verrazano (4/1): Undefeated in four lifetime starts and the winner of the Wood Memorial in his last start, this colt should be able to stay in the clear during the early stages of the race and will have every opportunity to win when the field wheels towards the judge.

16-Orb (7/2): The Florida Derby winner rolls into Kentucky on a four-race win streak and is the deserving morning line favorite. He likes to do his best running late in the race so watch for those famous red silks of Stuart Janney III and Phipps Stable at the top of the stretch. Hall of Fame trainer Shug McGaughey is seeking his first Kentucky Derby victory.

17-Will Take Charge (20/1): Won the Rebel Stakes back on March 10 and hasn't raced since. The layoff might be hard for this colt to overcome.

18-Frac Daddy (50/1): He's had some foot issues this spring and might be finally rounding back into his best form but is his best good enough to win this race?

19-Java's War (15/1): Finished a good second to Verrazano in the Tampa Bay Derby and won the Blue Grass Stakes with a big late move. He's still seeking his first win on dirt after two prior attempts.

20-Vyjack (15/1): Finished third in the Wood Memorial, his first defeat in five career starts. Prior to the Wood he won the G3-Gotham and G2-Jerome.

So many choices, so little time.

Year after year, the Kentucky Derby presents us with a wide-open handicapping puzzle. How can we pick just one horse to win when so many have a legit shot, assuming things go their way once they leave the starting gate? At the end of the day, we sift through the past performances, watch the race replays and whatever other information we prefer, all in an attempt to try to come up with the pick that will pay us some good, old fashioned American greenbacks.

I've boiled down this field to two horses that I really like more than all others: Itsmyluckyday and Orb, with Itsmyluckyday my top play.

Orb cleanly beat Itsmyluckyday in the Florida Derby to stamp himself one of the favorites for this year's Run for the Roses, but Itsmyluckyday has flown under the radar just a bit after that defeat. He had a two month layoff prior to that race at Gulfstream Park and he probably needed that race in order to be in a position to run his best race at Churchill Downs. Itsmyluckyday has shown the ability to run a big race and his stalking running style and mid-gate post position should allow jockey Elvis Trujillo to gain good position in the early going.

The real separator for me with respect to Orb and Itsmyluckyday is their odds. Orb is your morning line favorite at 7/2. Itsmyluckday is sitting at 15/1 prior to the wagering open for early betting on Friday. Even if I assume Orb will improve off that Florida Derby effort in at Churchill on Saturday, I also feel Itsmyluckyday is ready to run a big race. So for me, the difference between 7/2 and 15/1 is just too great to pass up.

Of course, we're talking about morning line odds and those will certainly change once the public begins to put their money where their mouth is. For that reason, I set some limits on what price I'm willing to accept on Itsmyluckyday in order to him to be my prime win bet, and that limit right now is roughly 7/1. Anything less than 7/1 and I'll begin to look around for other value options. Odds at post time of 7/1 or higher (and, please 15/1!), and I'm fully behind this colt.

For the exotic wagers, I'll look to play Itsmyluckyday above and below Orb, Revolutionary, Palace Malice and Goldencents.