The 10 best Stephen Curry shots from the Warriors-Nuggets series

Stephen Curry hit more difficult shots in the Warriors' six-game series win over the Nuggets than any other player hit all season. We look back at some of Curry's most memorable field goals.

Share All sharing options for: The 10 best Stephen Curry shots from the Warriors-Nuggets series

Stephen Curry made a total of 51 shots in the Golden State Warriors' six-game upset of the Denver Nuggets in the first round of the 2013 NBA Playoffs. All of them are right here in this video.

Several of these shots -- as I have chronicled here and here -- were as a result of bad Denver breakdowns. But many more came because Curry is capable of scoring in ways nobody else in the NBA can. We knew he could make high degree-of-difficulty shots -- witness the 54-point performance at Madison Square Garden -- but to do it on the league's biggest stage when his team was the underdog in the series is a level of special I didn't think he could reach. We'll be remembering Curry's shooting performance for a long, long time.

To commemorate it, here are my 10 favorite Curry field goals from the six-game slate, plus a few others worth remembering.

This was the first huge shot of Curry's playoff career. Down three, the Warriors run their patented Elevator Doors play on the left side. However, the Nuggets sniff it out, as Lawson sneaks through the opening before Harrison Barnes can close the doors. 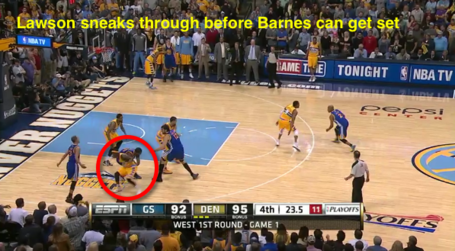 That forces Jarrett Jack to drive. He is cut off and throws a wild pass to Curry in the corner that nearly gets picked off. 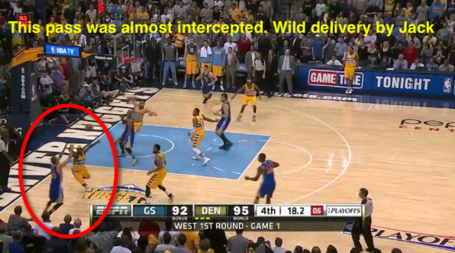 The play has now devolved into chaos, but Curry steps up to save the day. He gives Lawson a pump fake, dribbles once to his left into the corner and raises up just before Lawson can recover. Still, this is a difficult shot. 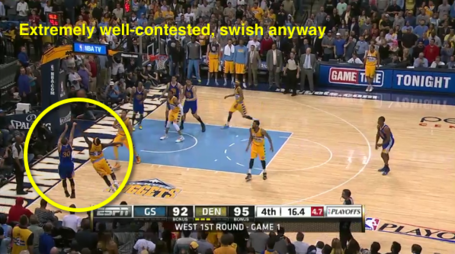 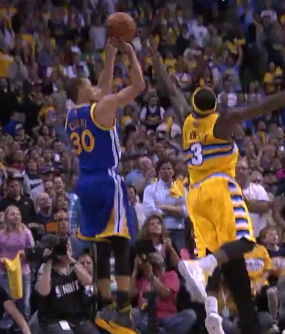 No matter. Curry swished it and the game was tied.

Curry is essentially trapped in the left corner thanks to another weird pass by Jack. He eludes Lawson with a quick pump fake, but that only clears a little bit of space given all the traffic around him. 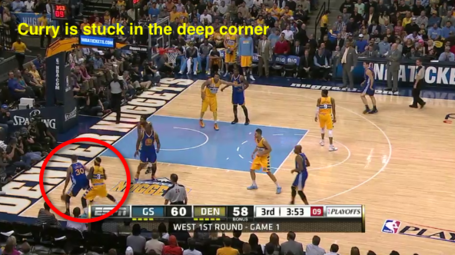 Not only must Curry elude Lawson, he also has to deal with Chandler. To get rid of him, Curry makes it look like he's going to pull up for the jumper, then quickly crosses over left to right to get middle. 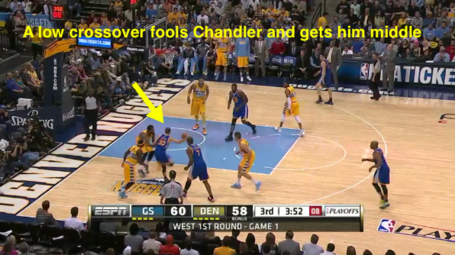 The job's not yet done, though. Curry must get his shot off against McGee, one of the league's premier shot-blockers. To do that, Curry simply throws in a sky hook and lofts it well over McGee's long arms. I repeat: a sky hook. Curry is a guard. 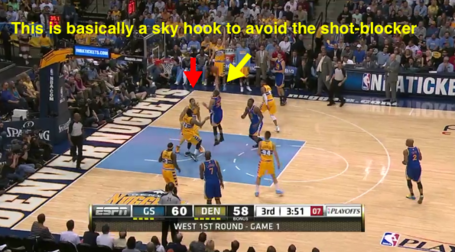 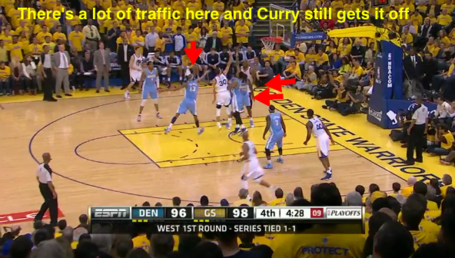 Miller guards Curry way out beyond the three-point line, and Curry responds by driving by him going left. Problem: McGee is there to swat any shot. Solution: one-handed lefty floater over his outstretched arm. 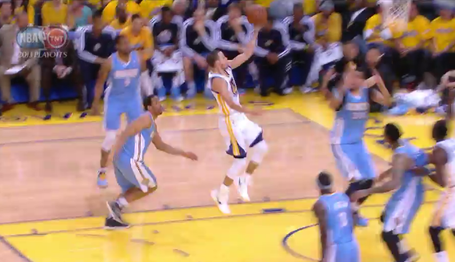 Miller and the Nuggets should never had let Curry get this deep, but how many others would finish a play like this?

The Warriors are prepared to run their patented transition drag screen, but Landry makes a mistake, slipping to the basket well before Curry makes contact. That allows Corey Brewer to stay with Curry and cut off his drive going left. 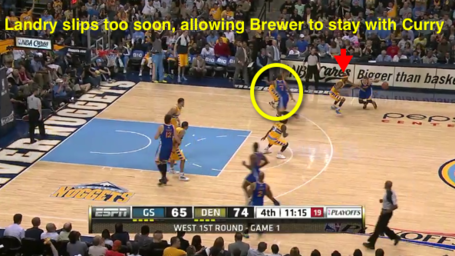 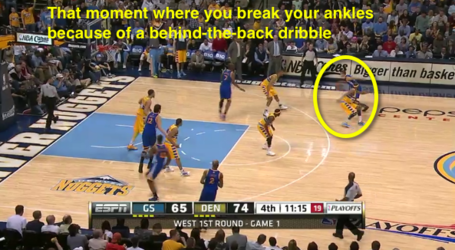 All that's left is to hit a shot very few people can make. No big deal. 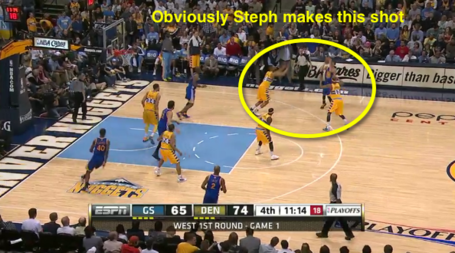 Closeout game. Crunch time. Nuggets rallying. A made bucket needed to stem the tide. And this is what Curry throws up there. 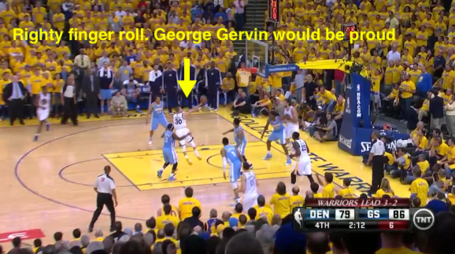 And it goes in, obviously.

More impressive than the shot: look how Curry sneaks his entire body by his defender before launching. Textbook, fundamental play here. 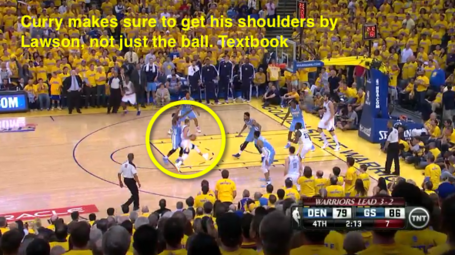 I mean, come on. Who else would even think to take this shot?

Pull-up jumpers in transition are traditionally taken when a player stops on a dime for a wide-open look after it's clear they can't shoot a layup. They come when someone is moving with a full head of steam forward, then stops. This shot is not open. It does not come on a full head of steam moving forward. Basically: it's a bad shot for 449 NBA players. 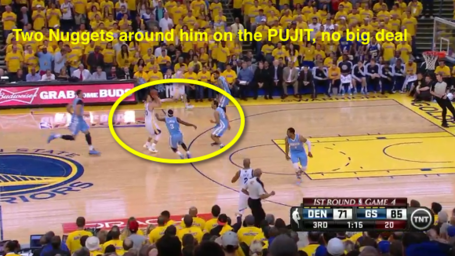 It is not a bad shot, apparently, for Stephen Curry. 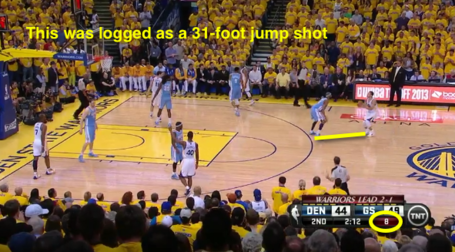 If I were the official scorekeeper, I'd have given Curry four points for this shot.

Curry is right-handed, by the way. That was a 10-foot left-handed scoop shot fading away from the basket. For reference, here's where Curry took off. 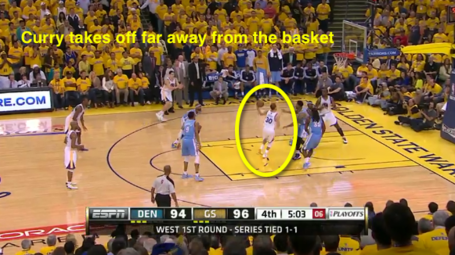 And here's where he landed. 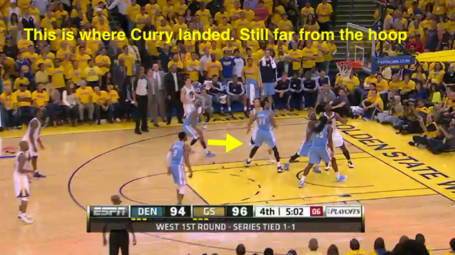 Curry essentially jumped two feet forward and four feet sideways, all after eluding Faried with a crossover in the right corner. Also, he shot with his left hand without his right being used as any sort of guide. Yup.

Clearly, this was a shooting series for the ages. The degree of difficulty on these specific shots is something no other player in the league can replicate. There may be better players in the NBA than Curry, but there is no better difficult-shot maker.

• Pay Nate Robinson (if you dare)

• David Kahn has the final word

• What's wrong with the Knicks?

• The best GIFs from Thursday's games