Will Greg Schiano sink the Buccaneers?

The Tampa Bay head coach's unwavering approach may be too much for his team.

Share All sharing options for: Will Greg Schiano sink the Buccaneers?

Is one year enough to get a handle on an NFL head coach's identity? Maybe, maybe not. We don't really have much choice in an era where the life span for head coaches is about three seasons. Greg Schiano of the Buccaneers didn't even need a full month to introduce himself to the world outside Tampa Bay.

A decision to smash up the Giants' kneel down formation in September painted the picture of brash rookie coach perhaps a little too eager to make his mark. Citing an old coaching trope about "playing til the last whistle" Schiano crossed a line, violating an unwritten rule about player safety, and got upbraided by Tom Coughlin. Within the week, he was a "bully," or just a meat head who didn't get it.

Ask Schiano to define himself, and he'd probably spout off some time-honored lines about discipline. He was bringing the mentality and culture that made him a success at Rutgers. Yet discipline still appears notably absent in Tampa Bay, largely because of Schiano himself.

This week, reports of player contact at OTAs surfaced. Roy Cummings of the Tampa Tribune dished to Pro Football Talk about the Bucs' second- and third-team players hitting during the spring offseason work. Players do not wear pads for these sessions because contact is strictly forbidden by the 2011 Collective Bargaining Agreement. It's a player-safety issue.

A week before tryout, players showed off their hitting skills, a tussle between Jeremy Zuttah and Akeem Spence turned into a bigger incident with almost two dozen players. 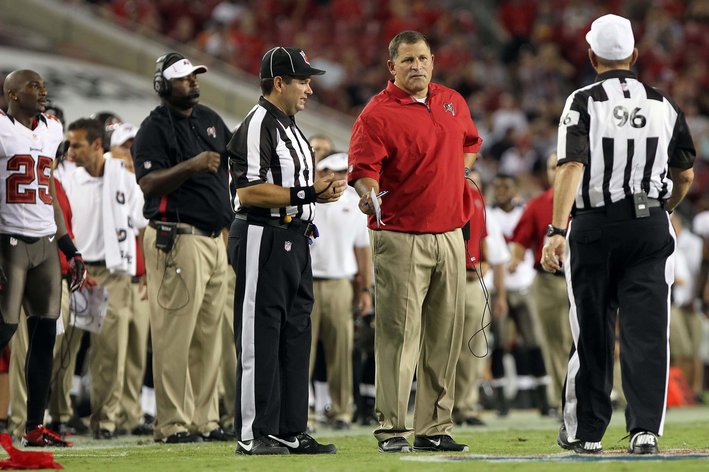 Schiano pushed back on reports of OTAs gone wild Wednesday afternoon. He defended his uptempo practices as "99.9 percent" appropriate. As for the 0.1 percent of wiggle room, well, there are lots of guys out there on the field, things happen.

Teaching the new guys how to crash kneel downs wasn't Schiano's only misstep of the offseason. His lack of discipline created an uncomfortable spring for quarterback Josh Freeman.

Schiano started undercutting Freeman the day after the season ended. In a bit of classic passive-aggressive coach speak, he told the media about the need for competition at the position. Worse, the coach awkwardly described himself as "not all in" with the quarterback.

The saga went on from there. At the Combine, Schiano changed his tune. He issued a public vote of confidence in Freeman during his media availability.

"I believe that with Josh Freeman," Schiano said, "we'll be able to accomplish our goals."

A month later, reports started trickling out that the Buccaneers were interested in several free agent quarterbacks, including Matt Cassel, Chase Daniel and Carson Palmer. The Tampa Bay Times reported three weeks before the draft that Schiano was the lone voice inside the organization not content with the quarterback.

Tampa Bay drafted North Carolina State quarterback Mike Glennon in the third round this year. The saga with Schiano and his incumbent quarterback has continued, albeit via whisper campaign in the papers.

Freeman had his struggles with consistency, despite setting franchise records for yardage and touchdowns. Competition is a generally a good thing, and the Buccaneers were wise not to jump into a hefty contract extension with so much left to be determined.

There's an unwritten rule about what coaches can say about their quarterbacks in the NFL. Typically, it's an outward display of support, even a tepid one that the world can see through. Sending mixed messages through the press is not advisable. Schiano, play-till-the-last-whistle guy that he is, even went so far as to let the confusion continue via leaks.

"It's his way or [expletive] you. He needs to back up a little bit, or he's going to have a very hard time in this league over the long haul."

That's the advice one veteran NFL head coach offered Schiano in a Mike Silver article at Yahoo Sports. That came out just days after the incident with the Giants. Few were surprised by it. The thrust of Silver's piece is that Schiano was already regarded as something of a bully for his antics with pro personnel men during his days at Rutgers (coaches behaving badly and Rutgers are kind of a theme lately). He brought that same hot-headed rigidity to the NFL.

OTAs were a problem in Tampa Bay last year too. Schiano and Kellen Winslow locked horns early on before the Bucs eventually shipped the tight end to Seattle for a throwaway draft pick.

Winslow was probably never going to be a fit under Schiano, and with his balky knees and hefty cap number, his departure didn't raise many eyebrows at the time. The veteran tight end later dished on his run-ins with the coach. It fed an emerging narrative of an autocrat obsessed with his system.

All of that discipline was supposed to move the Buccaneers to better things. But when a four-game win streak turned into a five-game skid, cracks in the system started to show. Unnamed Buccaneers complained in the press about the coaches. The season ended before things went full HMS Bounty.

A knack for buzzwords is a prerequisite for coaching. However, there is a difference between urging better execution and living a "Schweppervescent" lifestyle versus a cultural putsch to cleanse the locker room. Steve Spagnuolo tried something similar in St. Louis.

The problem with an absolutist approach is that good ideas and talented players get sacrificed for the sake of process. Adaptability gets NFL teams much further than adherence.

Somewhere in between moments of public waffling over Freeman, Schiano promised to ease up in his second season.

From the Tampa Tribune:

"We had one big thing we had to do. We had to establish a culture in the building. Sometimes, you have to go overboard one way or another to get that culture established. But I think at this point, our football team understands who I am and how our football program is going to be run. I think that happened as the season went on.''

The Buccaneers spent big in free agency for the second year in a row. A glaring weakness in the secondary got a much needed infusion of talent. One look at the roster, and it's clear that anything less than a trip to the playoffs would be a real disappointment. It's up to the coach to tie it all together.

Schiano may well know he needs to change. Whether or not he can is a different story. The coach's undisciplined quarterback comments and more strife at OTAs don't inspire much confidence in his cultural revolution.

• Can the Jets move forward?

• Which AFC team could go from worst to first? | Which NFC team?