Star Wars Night at the ballpark

Share All sharing options for: Star Wars Night at the ballpark

This weekend the Toledo Mud Hens held a Star Wars Weekend, coinciding with May 4 ("May The Fourth Be With You") and May 5 ("Revenge of The Fifth"), a tandem of nerd passovers, so to speak. Their eyesore uniforms made the Internet rounds for obvious reasons.

Two days before the game, we looked for tickets and found ... nothing. StubHub had nothing. Craigslist was barren. Despite being the lovers of butt comfort that we are, we bucked up and bought standing-room only tickets, knowing that seats would be available in the final innings.

I should also preface everything below by saying I'm not a Star Wars fan. It was simply a series of films I never had the inclination to watch. In college my then-girlfriend dragged me to see Attack of the Clones. In films with Samuel L. Jackson, I normally turn to him for instructions on how to feel, and he looked emotionally distant. Message received. But I know enough about the franchise to speak eloquently on it. For example, I don't think any nerds would disagree with me when I say that Star Wars is, for the most part, exactly like Star Trek. 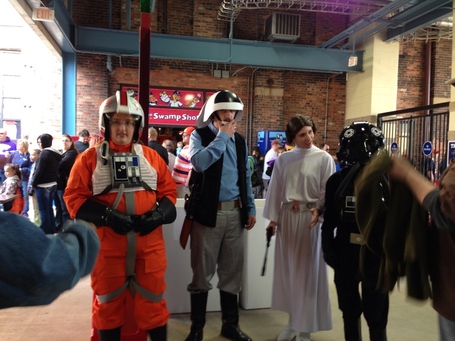 On their Facebook page, the Hens encouraged fans to show up in costume, and this had the potential of luring some peculiar souls out of their caverns, but Star Wars zealots are a mostly harmless bunch. (The lightsabers they handed out were all fake.)

Most of the fun occurred before the game and in the concourses. Among the shenanigans: tables set up for face painting, themed concessions like "Yoda Soda," a chance to take your picture with Darth Vader or Chewbacca, as well as a gaggle of children and children-at-heart decked out as their favorite Star Wars characters. As I mentioned, I didn't see all of the Star Wars films, so I may not be familiar with the part where the majority of the outfield picnic tables and patios were reserved for a corporate family outing. Maybe that's how the "star wars" began?

The best move of the night was the silent auctions where fans could bid on the game-worn Chewbacca uniforms, with all proceeds going to charity. Saturday night's auction proceeds would go to Read For Literacy; Sunday's went to the Spina Bifida Association of Northwest Ohio.

As players warmed up, from far, far away the Hens uniforms just looked like muddy beige jerseys. From the outfield they were so nondescript, a guy next to me pointed at them and asked, "So which team is that?" 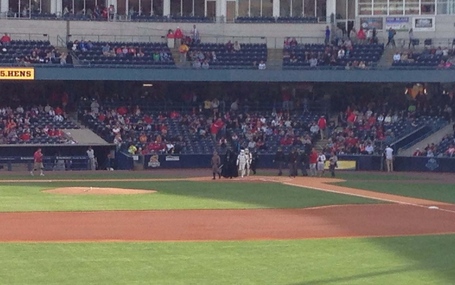 When the umpires were announced, they played "The Imperial March" through the P.A. as Vader and some Stormtroopers led them onto the diamond. For a brief moment, I thought the umpires were in costume; this would have been a monumental moment in the arbiters of baseball rules to own the stereotype of being the antagonists. But they did follow Vader onto the field, which makes them guilty by association of high (space) crimes and misdemeanors.

During the game, we were treated to various Star Wars sound bites between pitches. At one break between innings, the club fired up a video of CGI Stormtroopers lining up and ... yep, they're doing the Party Rock shuffle. Just like in the movies! They also played snippets of Weird Al Yankovic's Star Wars songs "Yoda" and "The Saga Begins." There was also a Bohemian Rhapsody parody called "Midichlorian Rhapsody," but as Star Wars connoisseurs you already knew this and I didn't. To demonstrate how far "out of it" I am, I had to Shazam the unfamiliar at-bat song of Mud Hens catcher Ramon Cabrera, because all the kids were dancing to it, and it was the Harlem Shake.

On the video board, all the player for both teams were Photoshopped into various characters. For the Hens, they were either R2D2, C3PO, or this pilot dude. The visiting team players' heads were jimmied onto the bodies of Stormtroopers, Boba Fett and Princess Leia. I suppose that last one was a bit emasculating, and probably not the message you want to send to all the kids in the ballpark. 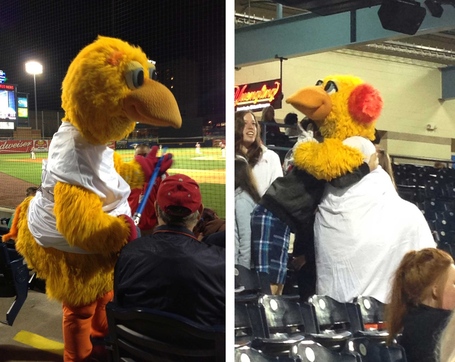 And did we mention the mascots? Muddy the Mud Hen was dressed up in Luke Skywalker garb, with his sister Muddonna's hair in little Leia pigtails. The neighboring minor-league hockey team, the Toledo Walleye, also had their mascots traipsing around in Star Wars-themed costumes.

The most fascinating part, however, was that supposedly 11,500 people (and I believe the number) came to see a bad baseball team. Few particularly cared about the team's record, or that the team's three most visible position players — Danny Worth, Quintin Berry and Avisail Garcia — didn't play due to injury, and such is the mystique of a minor league baseball night done correctly. The Toledo fans likely don't care that they're the worst-hitting team in the International League, whose .213/.280/.331 team batting line through Saturday's games was dead last across the board; their 8-22 record is on par with that of the Houston Astros.

For the most part, it was a pitcher's delight of a game: neither team scored until the ninth inning, when both teams posted one, then Charlotte pushed another run across in the top of the 13th to win 2-1. Everybody else spent the evening enthralled with the Star Wars-themed distractions. Even as a baseball enthusiast, the only time I became enthralled with the game was in that ninth inning, when Hens cleanup hitter Jordan Lennerton laced a game-tying two-out single.

So when three runs are scored in 13 innings, a five-digit crowd needs all the distractions possible. There is no better communal activity than handing out kazoos at the gate and buzzing the Star Wars theme in unison.

Photos by Matt and Brit Sussman

• Bryce Harper’s ejection and the tyranny of John Hirschbeck

• Why does the Hall care about steroids?